The Words C.S. Lewis Made Up: Grailologist

Posted on November 8, 2017 by Brenton Dickieson

We all know C.S. Lewis as the Narnian, but behind the children’s work was his experience as a teacher of English literature, a writer about the history of literary movements, and a tinker in other forms of fiction. In that tinkering, and in his letters and essays, he would sometimes create new turns of phrase when it was needed. This is the fifth in the series on words that C.S. Lewis coined.

At various times, Lewis floated the idea that the Arthurian tales could be rooted in history. In his subversive way, Lewis pointed out that stories of Arthur’s conquest of Rome are “the least historical and the least mythical thing about Arthur”–in one stroke granting the mythic value of Arthur while putting the legend on the historical spectrum.

If there was a real Arthur he did not conquer Rome. If the story has roots in Celtic Paganism, this campaign is not one of them. It is fiction. And what fiction! We can suspend our disbelief in an occasional giant or enchantress. They have friends in our subconscious and in our earliest memories; imagination can easily suppose that the real world has room for them. But vast military operations scrawled over the whole map of Europe and excluded by all the history we know are a different matter. We cannot suspend our disbelief. We don’t even want to (“The Genesis of a Medieval Book,” 19).

This comment is part of Lewis’ general approach to theoretical readings of texts, a “what’s sauce for the goose is sauce for the gander” theory of criticism. Psycho-analytical and archetypal readings are all fine and good, provided we can read the reading pscyho-analytically and archetypally–a project that Lewis hints at in his essay, “Psycho-Analysis and Literary Criticism” (298). We read literature in the context of history, provided we know that we too are in the context of history. Today he might say that the study of culture is, itself, a culture to be studied.

I don’t think, though, that Lewis is merely using Arthur as a test case. His own thoughts on Arthur in “The Genesis of a Medieval Book” are a Reader-Response look at Geoffrey of Monmouth’s Historia Regum Britanniae (c. 1136). The Historia records the tale of Arthur in Europe that both Lewis and his friend J.R.R. Tolkien play with in their incomplete Arthuriads. That wikipedia calls Geoffrey’s work “wildly inaccurate” is not without its ironies, but Lewis’ distaste for one of our chief Arthurian texts isn’t subtle:

The annals of senseless and monotonously successful aggression are dreary enough reading even when true; when blatantly, stupidly false, they are unendurable (“The Genesis of a Medieval Book,” 19-20).

And, yet, in Lewis’ Reader-Response criticism, the revulsion he feels in his reading has value:

The decided contempt which it gives me for Geoffrey has the paradoxical effect of making me readier to believe that the Historia is filled with valuable deposits of tradition, both legendary and historical. Wherever I meet anything that I think good as story or probable as history (and I meet both fairly often) I feel sure that Geoffrey did not make it up (“The Genesis of a Medieval Book,” 20).

In classical Lewis form, it is the hermeneutic of suspicion now looked at suspiciously.

I think we would find it hard as historians to use this approach universally, but it allows Lewis to do a couple of things. First, it takes a swing at the Achilles heel of the anti-myth crowd in history, where anything faintly mystical, fantastic, symbolic, allegorical, hyperbolic, or supernatural is by definition excluded from consideration. Second, it keeps Arthur in the game of history.

And it was a game that Lewis liked. Beyond the hints and references in his various letters, poems, and books–and allusions abound–Lewis’ final book in the Ransom Cycle is decidedly Arthurian.

After the narrator “I” of THS has slept by Merlin’s well, like Anodos of Phantastes, Dr. Dimble brings up the Arthurian legend as a construct for reading British culture. This is a Charles Williams’ move: by separating spiritual Logres from the historical Britain, one can see how they interrelate. However one might play with the hallows in poetry, in Lewis’ fiction the natural and arch-natural are not easily separated.  “It all began,” said Dr. Dimble, “ when we discovered that the Arthurian story is mostly true history” (That Hideous Strength, ch. 17).

This is the deepest textual play in That Hideous Strength, that things are never quite merely one thing or the other. As the protagonist, Mark Studdock, is suffering through an increasingly poor and desperate attempt at brainwashing, he looks at the crucifix before him differently: it is now in his mind “neither as a piece of wood nor a monument of superstition” (ch. 15). In fancy critical terms we might say that Lewis uses the richly textured symbol of Arthur to problematize naturalistic and supernaturalistic reductionism. In plainer language, he is testing the idea of the word “just” when we say something is “just a story” or “just a myth.”

Nothing is ever just a myth. And, of course, we should read all theories about myths as mythologies themselves.

This upside-down tendency in Lewis, connected with his open discussion of Arthur in literary and cultural criticism, is probably why, in 1963, an American named Merrill Rogers wrote to Lewis about his own theory of the grail legends. Lewis’ response perhaps demonstrates how he has diverged from Charles Williams in his interest in hallows:

I am not a good enough Grailologist (to coin a dreadful word) for your purpose, for though I am very interested in the Arthurian romances as extant works of art, I have never been much concerned with what we may call the ‘pre-history’ of their various ingredients. I am therefore unable to tell you whether you have been anticipated in the Hermetic and alchemical hypothesis to which Jung has led you. If not–and someone like Loomis will be able to tell you–I think your theory is well worth putting forward (to Merrill Rogers, 20 Jan 1963).

Lewis goes on to give some practical advice about how to handle the publication of Rogers’ theory, including the warning that “Speculations about the Grail have a strange way of causing people who have found something to claim that they have found everything!” This “face at the bottom of the well” effect of criticism is a little ironic, given Lewis’ reading of Geoffrey’s history above, but an interesting problem in reading in general. Once you decide that “there is really something there” in The Lord of the Rings, Narnia, Harry Potter, Earthsea, “The Rime of the Ancient Mariner,” Othello, The Lion King, the Farmer’s Almanac, or your local all puppet production of Guys and Dolls, you are bound to find what you are looking for.

Still, there is room for grailology in our many-splendoured world of ideas, and the Arthuriad a rich canvas to both admire and paint upon. Charles Williams is probably a grailologist in Lewis’ estimation, so much so that Lewis spent a number of months collating Williams’ grail materials for a posthumous publication of Arthurian Torso. It is telling that the only editorial projects Lewis completed in his career were for work by George MacDonald and Charles Williams.

Lewis did suggest to Merrill Rogers that the hunt could be fun. Indeed, grailologists abound today in their bookmaking and pilgrim ways. But for all his flirtation with Arthuriana–and I will argue in a chapter coming out in January that Lewis may have been moving toward another Arthurian work–Lewis did not claim that he was in the business of grailology. It is true that his interest in Arthur was in the figures and the adventures, not in the grail quest and the meaning that we have today. I think there is a grail quest in That Hideous Strength, but it is veiled deeply. I would share what I think it is, but I would hate to disappoint grailologists who feel that they have finally found the meaning of life, the universe, and everything in their well-worn pages of Lewis’ dystopic fiction. 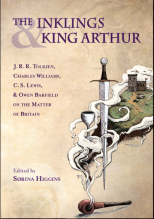 The Words C.S. Lewis Made Up

“A Pilgrim in Narnia” is a blog project in reading and talking about the work of C.S. Lewis, J.R.R. Tolkien, and the worlds they touched. As a "Faith, Fantasy, and Fiction" blog, we cover topics like children’s literature, apologetics and philosophy, myths and mythology, fantasy, theology, cultural critique, art and writing. This blog includes my thoughts as I read through Lewis and Tolkien and reflect on my own life and culture. In this sense, I am a Pilgrim in Narnia--or Middle Earth, or Fairyland. I am often peeking inside of wardrobes, looking for magic bricks in urban alleys, or rooting through yard sale boxes for old rings. If something here captures your imagination, leave a comment, “like” a post, share with your friends, or sign up to receive Narnian Pilgrim posts in your email box. Brenton Dickieson is a father, husband, friend, university lecturer, and freelance writer from Prince Edward Island, Canada. You can follow him on Twitter, @BrentonDana.
View all posts by Brenton Dickieson →
This entry was posted in Studies in Words and tagged Arthuriana, books, C.S. Lewis, Charles Williams, Earthsea, Harry Potter, Inklings and King Arthur, J.R.R. Tolkien, Jung, King Arthur, literature, Narnia, Ransom Cycle, Selected Literary Essays, Studies in Medieval and Renaissance Literature, Studies in Words, That Hideous Strength, The Lord of the Rings. Bookmark the permalink.

17 Responses to The Words C.S. Lewis Made Up: Grailologist