Posted on December 30, 2020 by Brenton Dickieson

With all the modern skepticism in the world, I still have not been able to shake off a belief in Father Christmas. And I mean here more than that “Yes, Virginia, there is a Santa Claus” approach to the season of love and sharing, or the heartwarming and overly litigious versions of Miracle on 34th St. As I confessed in my “Santa Manifesto” from years ago, my wondering eye has never seen a miniature sleigh and eight tiny reindeer. I’ve never caught the old man in his trick smuggling elf-made presents into our house. I have some doubt there is a single, solitary, bearded North Pole dweller who visits each house in a single evening, dealing coal to some and Hasbro toys to others–though I am a quite beard-friendly fellow. I’m also not certain the spirit of St. Nicolas has left this world entirely. He may not look exactly like a Coca Cola commercial, but I’m inclined to believe that there still is a Santa Claus.

Part of that tendril of belief is that, from time to time, I get unexplainable gifts. My wife is not so convinced as I am that I am not night-wrapping gifts for myself, though I wouldn’t put it past my subconscious self to pull such a caper. As far as I know, though, there have been Christmas gifts that have come to me without explainable provenance.

My gift from Santa for 2020 is, remarkably, the Marvel Comics version of C.S. Lewis’ The Screwtape Letters. This 1994 Charles E. Hall graphic novel adaptation of Screwtape has proved completely impossible to find in local shops. I suspect that collectors keep it, and that very few sought it out when it was first published who were not already Lewis fans. As you can imagine, both as a C.S. Lewis scholar and an avid reader of Screwtape, I am pretty pleased to have gotten this 1st Canadian edition in the mail on Christmas Eve! 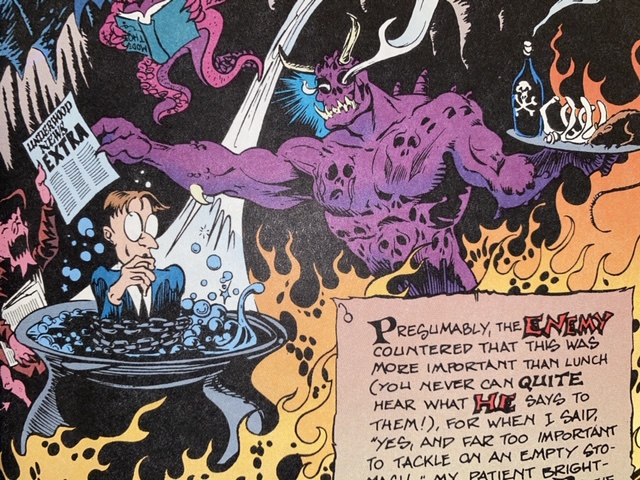 As I have only just popped in and out of the adaptation, I’ll leave it to Tyler Hummel at “Geeks Under Grace” for a substantial review with a few great pictures (which I have used here). My impressions, though, are largely the same as his: a colourful, busy, layout crammed with as much text as they thought they could get away with in an adaptation that is more hybrid comic/book than graphic novel. The comic version seems like a great way to reread The Screwtape Letters in a new way. As a medium for capturing what Lewis was trying to do for Christian spirituality, however, it takes a risk that could undercut itself. The grotesque is “cute,” and thus shares the danger of parody for pushing the line from the witty to the ridiculous. The cover is a case in point, where the “Danger! Prayer!” sign next to the square-jawed, clean-cut white kid oozes 20th-century American Christian pop culture cheese.

Still, I very much look forward to immersing myself in the reading experience. Deep thanks, then, to whomever may have sent this to me. I do no know if you wear robes of scarlet or not. I cannot tell if your pipe smoke encircles your head like a wreath and your little round belly shakes when you laugh like a bowl full of jelly–though I will note that belly weight and smoking are twin concerns for heart disease later in life. But I am grateful for this Screwtape Christmas miracle–a demonical gift to brighten one’s Christmas!

“A Pilgrim in Narnia” is a blog project in reading and talking about the work of C.S. Lewis, J.R.R. Tolkien, and the worlds they touched. As a "Faith, Fantasy, and Fiction" blog, we cover topics like children’s literature, apologetics and philosophy, myths and mythology, fantasy, theology, cultural critique, art and writing. This blog includes my thoughts as I read through Lewis and Tolkien and reflect on my own life and culture. In this sense, I am a Pilgrim in Narnia--or Middle Earth, or Fairyland. I am often peeking inside of wardrobes, looking for magic bricks in urban alleys, or rooting through yard sale boxes for old rings. If something here captures your imagination, leave a comment, “like” a post, share with your friends, or sign up to receive Narnian Pilgrim posts in your email box. Brenton Dickieson is a father, husband, friend, university lecturer, and freelance writer from Prince Edward Island, Canada. You can follow him on Twitter, @BrentonDana.
View all posts by Brenton Dickieson →
This entry was posted in Reflections and tagged C.S. Lewis, Christmas, Santa Claus, The Screwtape Letters, The Screwtape Letters: Marvel Comics. Bookmark the permalink.

6 Responses to A Screwtape Christmas Miracle