C.S. Lewis Really Should Have Seen it Coming: More On the Dangers of Reading

Last year I wrote a post called, “Be Careful What You Read… C.S. Lewis’ Literary Encounter with George MacDonald.” It got a big readership, partly (I think) because it turns our expectations upside down. According to research by sociologist David Kinnaman in books like You Lost Me, Christian youth are leaving the North American church in part because they feel the church is protecting them from big ideas in the world “out there.” According to Millennials, churches seem afraid that if they encourage education in science or philosophy, students will fall away from faith.

I’ve seen this–especially the protective instinct of parents and churches. I’ve also watched students step outside their faith story in the context of university science and philosophy classes. As a father and mentor to young Christians, I get that instinct to protect. I know how heartbreaking it is to watch people you love faltering in their faith. I know why churches try to protect their young people.

I just happen to think that is a deadly approach.

It is deadly because it doesn’t work. Creating intellectual ghettos will only delay a person’s encounter with the world. It will always lead to arrested development.

Moreover, bright, faithful kids are left with the message from leaders that “Christianity doesn’t measure up, but believe it anyway because it’s true.”

Far from protecting young Christians from the world, we are actually giving in to a worldly idea. Some of my best students are atheists and agnostics, and most have a skeptical starting point. The most common response I get from our best young minds is something like this, “Brenton is bright. He has read philosophy and will ask any question. I just don’t understand how he can still be a believer.” The most common first response I get to theism is not a solid intellectual answer–that comes later–but the instinctive believe that it is all so ridiculous it can’t be true.

In this way, protective church believers and young atheists agree that Christianity isn’t credible. They just respond differently to that fact.

So many are surprised when C.S. Lewis turns everything upside down and sends out a warning to skeptics and atheists:

“A young man who wishes to remain a sound Atheist cannot be too careful of his reading” (Surprised by Joy, 182).

C.S. Lewis’ first teaching experience at Oxford was not in the English discipline where he would spend most of his teaching life, but in philosophy. Far from being a fundamentalist atheist, he followed the great philosopher Socrates in believing that one must follow the evidence where it leads. He read broadly, believing that he was secure in his intellectual atheism.

Eventually he found out that he was wrong:

“All the books were beginning to turn against me. Indeed, I must have been as blind as a bat not to have seen, long before, the ludicrous contradiction between my theory of life and my actual experiences as a reader. George MacDonald had done more to me than any other writer; of course it was a pity he had that bee in his bonnet about Christianity. He was good in spite of it. Chesterton had more sense than all the other moderns put together; bating, of course, his Christianity. Johnson was one of the few authors whom I felt I could trust utterly; curiously enough, he had the same kink. Spenser and Milton by a strange coincidence had it too. Even among ancient authors the same paradox was to be found. The most religious (Plato, Aeschylus, Virgil) were clearly those on whom I could really feed.” (Surprised by Joy, 201-202).

Sounds a bit like some of my students: “Brenton’s a great teacher, despite his Christianity.” Far from being a deficit, though, my faith perspective gives me a stronger position to talk about philosophy or science. And far from being something to hide, something to protect from the world, my faith grows with the great discussions that happen in culture and on the university campus. 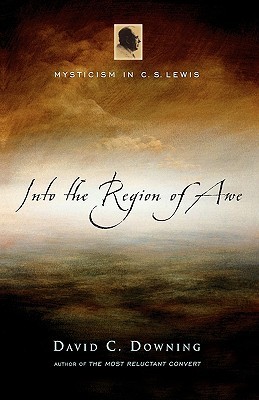 I am currently reading David C. Downing‘s, Into the Region of Awe: Mysticism of C.S. Lewis (2005). I’ve suspected for sometime that Downing was on to something here, and am glad now to sit down with it and tear it apart. So far it’s a great little book.

When you read through C.S. Lewis’ diaries and letters from his atheist period in the 1920s, you see him slowly shaping into a solid thinker. It is during this period that he is reading these dangerous books mentioned above alongside the great philosophers and artists of history. Once he outgrew a youthful  “chronological snobbery”–the idea that today’s ideas are necessarily better than old ideas–his reading list became more and more diverse.

There is a sudden shift that takes place in the late 1920s. There is a debate about when exactly this is–see my “Was C.S. Lewis Wrong About His Own Conversion“–but the change is evident to any reader. What David Downing has done is shown how this evolution in Lewis’ understanding coincided with the great Christian (and often mystical) devotional literature of history:

“Though there are only scattered references to ‘devotional’ reading in Lewis’s letters or diaries in his twenties, the two-year period 1929-31 finds him reading George MacDonald’s Diary of an Old Soul and Lilith, John Bunyan’s Grace Abounding, Dante’s Paradiso, Jacob Boehme’s The Signature of All Things, Brother Lawrence’s The Practice of the Presence of God, Thomas Traherne’s Centuries of Meditations, William Law’s an Appeal to All Who Doubt, Thomas a Kempis’ Imitation of Christ, as well as the Gospel of John in the original Greek (Region of Awe, 42-43).

The connection is significant. The more Lewis opened the door to authentic Christian writers, the more credible the life of faith became. Though his dive into faith was reluctant, in the end he did jump. And I suspect that this reading had a great deal to do with it.

Atheists really must be more careful in their reading.

“A Pilgrim in Narnia” is a blog project in reading and talking about the work of C.S. Lewis, J.R.R. Tolkien, and the worlds they touched. As a "Faith, Fantasy, and Fiction" blog, we cover topics like children’s literature, apologetics and philosophy, myths and mythology, fantasy, theology, cultural critique, art and writing. This blog includes my thoughts as I read through Lewis and Tolkien and reflect on my own life and culture. In this sense, I am a Pilgrim in Narnia--or Middle Earth, or Fairyland. I am often peeking inside of wardrobes, looking for magic bricks in urban alleys, or rooting through yard sale boxes for old rings. If something here captures your imagination, leave a comment, “like” a post, share with your friends, or sign up to receive Narnian Pilgrim posts in your email box. Brenton Dickieson is a father, husband, friend, university lecturer, and freelance writer from Prince Edward Island, Canada. You can follow him on Twitter, @BrentonDana.
View all posts by Brenton Dickieson →
This entry was posted in Reviews, Thoughtful Essays and tagged atheism, C.S. Lewis, convert, david downing, David Kinnaman, George MacDonald, J.R.R. Tolkien, literature, mysticism, philosophy, Reading. Bookmark the permalink.

22 Responses to C.S. Lewis Really Should Have Seen it Coming: More On the Dangers of Reading