Faint Hope for The Hobbit: The Battle of the Five Armies (Teaser Trailer Release)

Posted on August 1, 2014 by Brenton Dickieson

The teaser trailer for The Hobbit: The Battle of the Five Armies was released this week and has sped its way through the Tolkien fan digital community. You can check out the footnote conversation at A Tolkienest Perspective, or some thoughts about film adaptation at The Oddest Inkling. 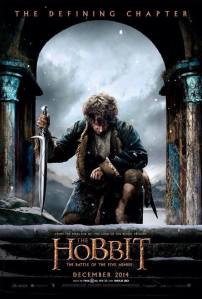 the first film was called, “Not All Adventures Begin Well“–I think it’s pretty obvious how I felt. My review for The Desolation of Smaug was more reflective, considering why it is that Peter Jackson’s adaptations swing so wide of the mark. I argued there that in turning a fairy tale into an epic, he captured all the adventure and psychology and violence that is missing in the fairy tale, and missed all the mythic elements that are essential for an epic. In short, the films fell between two stools.

Now, don’t get me wrong. I loved watching the movies. I relished in lining up with friends, sitting next to people with incredibly hairy feet, feasting on the screen, and then arguing about it afterward. I think they were pretty good films. But they were very flawed as adaptations.

And that is exactly why I have hope for the third film. C.S. Lewis noted in his earliest reviews of The Hobbit that it began in fairy tale, but took on a darker tone by the end. The Hobbit grows into the genre of epic, trying it on at the end with global warfare, new allegiances, great deeds, prophecy fulfilled, and the heat of Smaug. 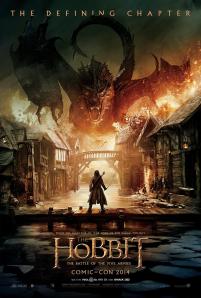 This is exactly what the third Hobbit film promises to give us. The Battle of Five Armies, if it is done well, could really bring us to the heights of The Return of the King.

Perhaps I should be wiser, and temper my hope. Once bitten, thrice shy, after all. But Jackson is a genius at the epic, and the Lord of the Rings Trilogy forged in me new expectations of what film-making and writing epic fantasy could be like.

So here is the teaser trailer for The Battle of Five Armies. I hope you enjoy, and do let me know what you think in the comments below, or share your thoughts on twitter (I’m @BrentonDana).

“A Pilgrim in Narnia” is a blog project in reading and talking about the work of C.S. Lewis, J.R.R. Tolkien, and the worlds they touched. As a "Faith, Fantasy, and Fiction" blog, we cover topics like children’s literature, apologetics and philosophy, myths and mythology, fantasy, theology, cultural critique, art and writing. This blog includes my thoughts as I read through Lewis and Tolkien and reflect on my own life and culture. In this sense, I am a Pilgrim in Narnia--or Middle Earth, or Fairyland. I am often peeking inside of wardrobes, looking for magic bricks in urban alleys, or rooting through yard sale boxes for old rings. If something here captures your imagination, leave a comment, “like” a post, share with your friends, or sign up to receive Narnian Pilgrim posts in your email box. Brenton Dickieson is a father, husband, friend, university lecturer, and freelance writer from Prince Edward Island, Canada. You can follow him on Twitter, @BrentonDana.
View all posts by Brenton Dickieson →
This entry was posted in News & Links, Reviews and tagged adventure, C.S. Lewis, fairy tale, fantasy, film adaptation, film-making, J.R.R. Tolkien, literature, Peter Jackson, The Battle of Five Armies, The Desolation of Smaug, The Hobbit, writing. Bookmark the permalink.

36 Responses to Faint Hope for The Hobbit: The Battle of the Five Armies (Teaser Trailer Release)