This week we are celebrating the 70th anniversary of the publication of That Hideous Strength (THS). While George Orwell’s 1984 is considered among the great 20th c. dystopian novels and C.S. Lewis’  THS is read mostly by fans of dystopia or of Lewis’ work, it is Lewis that preceded Orwell. Even Orwell’s genius “newspeak” finds its prepubescent cousin in the technocratic rhetoric of the evil N.I.C.E. in THS. Orwell was aware of Lewis’ project, and reviewed THS the day it was published–the same week that Animal Farm hit the stands.

Setting aside the connection between the two authors (which I will discuss on Wednesday), Orwell’s great bias is in his first line:

On the whole, novels are better when there are no miracles in them.

While you may or may not agree with him, this way at looking at books shapes his response to THS. Orwell is not without admiration for Lewis’ dystopia, and there is humour and enjoyment behind the review. Let me ask readers two great discussion questions:

Feel free to leave comments below, answering these questions or asking your own. 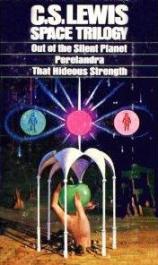 On the whole, novels are better when there are no miracles in them. Still, it is possible to think of a fairly large number of worth-while books in which ghosts, magic, second-sight, angels, mermaids, and what-not play a part.

Mr. C. S. Lewis’s “That Hideous Strength” can be included in their number – though, curiously enough, it would probably have been a better book if the magical element had been left out. For in essence it is a crime story, and the miraculous happenings, though they grow more frequent towards the end, are not integral to it.

In general outline, and to some extent in atmosphere, it rather resembles G. K. Chesterton’s “The Man Who Was Thursday.”

Mr. Lewis probably owes something to Chesterton as a writer, and certainly shares his horror of modern machine civilisation (the title of the book, by the way, is taken from a poem about the Tower of Babel) and his reliance on the “eternal verities” of the Christian Church, as against scientific materialism or nihilism.

His book describes the struggle of a little group of sane people against a nightmare that nearly conquers the world. A company of mad scientists – or, perhaps, they are not mad, but have merely destroyed in themselves all human feeling, all notion of good and evil – are plotting to conquer Britain, then the whole planet, and then other planets, until they have brought the universe under their control.

All superfluous life is to be wiped out, all natural forces tamed, the common people are to be used as slaves and vivisection subjects by the ruling caste of scientists, who even see their way to conferring immortal life upon themselves. Man, in short, is to storm the heavens and overthrow the gods, or even to become a god himself.

There is nothing outrageously improbable in such a conspiracy. Indeed, at a moment when a single atomic bomb – of a type already pronounced “obsolete” – has just blown probably three hundred thousand people to fragments, it sounds all too topical. Plenty of people in our age do entertain the monstrous dreams of power that Mr. Lewis attributes to his characters, and we are within sight of the time when such dreams will be realisable. 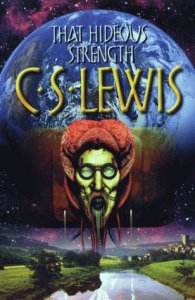 His description of the N.I.C.E. (National Institute of Co-ordinated Experiments), with its world-wide ramifications, its private army, its secret torture chambers, and its inner ring of adepts ruled over by a mysterious personage known as The Head, is as exciting as any detective story.

It would be a very hardened reader who would not experience a thrill on learning that The Head is actually – however, that would be giving the game away.

One could recommend this book unreservedly if Mr. Lewis had succeeded in keeping it all on a single level. Unfortunately, the supernatural keeps breaking in, and it does so in rather confusing, undisciplined ways. The scientists are endeavouring, among other things, to get hold of the body of the ancient Celtic magician Merlin, who has been buried – not dead, but in a trance – for the last 1,500 years, in hopes of learning from him the secrets of pre-Christian magic.

They are frustrated by a character who is only doubtfully a human being, having spent part of his time on another planet where he has been gifted with eternal youth. Then there is a woman with second sight, one or two ghosts, and various superhuman visitors from outer space, some of them with rather tiresome names which derive from earlier books of Mr. Lewis’s. The book ends in a way that is so preposterous that it does not even succeed in being horrible in spite of much bloodshed.

Much is made of the fact that the scientists are actually in touch with evil spirits, although this fact is known only to the inmost circle. Mr. Lewis appears to believe in the existence of such spirits, and of benevolent ones as well. He is entitled to his beliefs, but they weaken his story, not only because they offend the average reader’s sense of probability but because in effect they decide the issue in advance. When one is told that God and the Devil are in conflict one always knows which side is going to win. The whole drama of the struggle against evil lies in the fact that one does not have supernatural aid. However, by the standard of the novels appearing nowadays this is a book worth reading.

Transcription by Arend Smilde at www.lewisiana.nl. Original review found in the Manchester Evening News, 16 August 1945. Reprinted in The Complete Works of George Orwell, ed. Peter Davison, Vol. XVII (1998), No. 2720 (first half), pp. 250–251. If you haven’t found Arend’s page (which I’ve featured before), check it out.

On Wednesday I am asking the question, “Why did That Hideous Strength, which preceded 1984 and was reviewed by Orwell, not become a classic while Orwell’s 1984 did?”

I look forward to your comments!

“A Pilgrim in Narnia” is a blog project in reading and talking about the work of C.S. Lewis, J.R.R. Tolkien, and the worlds they touched. As a "Faith, Fantasy, and Fiction" blog, we cover topics like children’s literature, apologetics and philosophy, myths and mythology, fantasy, theology, cultural critique, art and writing. This blog includes my thoughts as I read through Lewis and Tolkien and reflect on my own life and culture. In this sense, I am a Pilgrim in Narnia--or Middle Earth, or Fairyland. I am often peeking inside of wardrobes, looking for magic bricks in urban alleys, or rooting through yard sale boxes for old rings. If something here captures your imagination, leave a comment, “like” a post, share with your friends, or sign up to receive Narnian Pilgrim posts in your email box. Brenton Dickieson is a father, husband, friend, university lecturer, and freelance writer from Prince Edward Island, Canada. You can follow him on Twitter, @BrentonDana.
View all posts by Brenton Dickieson →
This entry was posted in Reviews and tagged 1984, Animal Farm, books, C.S. Lewis, dystopia, fantasy, Fictional Universes, g k chesterton, George Orwell, Nazism, Newspeak, Ransom Trilogy, technocracy, technology, That Hideous Strength, totalitarianism, WWII. Bookmark the permalink.