The Problem with Moralistic Art: A Note on the Expository Demon

Posted on February 18, 2016 by Brenton Dickieson

I am not an avid theatre goer, but it is something I secretly love. Rather than the grand urban stages, I especially enjoy the small, intimate theatres that we have here in Atlantic Canada and tucked away in cities across the country. I like theatre because I like to see the seams in the costumes, the imperfection of story-in-flesh.

Theatre is the most incarnational of storied arts.

Over this past year I have seen 6 plays that have a moral message in them. It is very easy to critique evangelical filmmaking (see this great article here)—too easy, in fact. Even with the increase in technology, funding, and the elegance of videography, the kinds of movies my mother-in-law loves to bring home from the Christian bookstore are painful for me to watch.

Admittedly, I enjoyed Moms’ Night Out when I was forced to watch it, and I loved Blue Like Jazz (I think Steve Taylor is a genius). But the Left Behind films are the poster boys of bad Christian art. Painful, and too easy to mock.

Because it is so easy to whitepaper Christian art, let me turn instead to other stories that emerge out of popular culture to talk about the problem with moralistic art.

These six plays were each designed to challenge an audience to think about environmental issues, immigration policy, aboriginal issues, and cultural diversity. Five of the plays were commissioned to tell this kind of story, while one is a popular published play. They were all performed on Canadian stages, though one is a British plays, and they have shown on many stages across the country. Each of them was well acted, and each featured with superb stage management and creative direction with minimalist staging. None were big productions, though they reached a large audience throughout their respective tours and runs.

From an audience perspective, the plays were filled with moments of great humour and great sadness. I laughed at times, and was sometimes very moved. I am grateful for the experience of being there, always just a few feet from the pain and problems the playwrights wanted to feature.

But there was a problem. Of the 6 plays, 5 of them had moments where the message came to the forefront and the story or characters slipped into the background. Setting aside one self-deprecating short comedy, the other 5 plays each had moments of the thing that C.S. Lewis called “the expository demon”—the potential to bend the story into a philosophical dialogue. One of the reasons Lewis liked writing Narnia was that it slayed that demon, or at least kept it at bay. Even then, some readers of Narnia thought the message threated to outstrip the story. This is my concern with some of the plays I’ve seen over the last year.

Of these plays, about half of them used dialogue as a hammer, so that the characters in brief moments became embodied brochures. Honestly, 4 of them felt like very short versions of 1980s Billy Graham films, where there is a moment to repent at the end of the play.

Now, my concern is not the issues. These are things I’m passionate about. I very much want my culture to be challenged by environmental apathy, immigration access, and systemic cultural racism. I am not critiquing the ideas.

I am critiquing the art.

Let me highlight one of the plays, the one that I thought was artistically the best.

“Lungs” is a two-person play by Duncan Macmillan, and has been staged successfully many times throughout the world (see favourable reviews in the UK’s Guardian and Canada’s Chronicle-Herald).

It is filled with comedy, a couple who are thinking about their future together. The woman, a doctoral student, is passionate about environmental issues and is wondering whether it is ethical to have children in an age of carbon overload.

The actors that performed this piece did a phenomenal job. It is an intimate play, and I was so close that I felt each awkward moment with my own awkwardness, and each loving movement with my own empathy. Beautifully done.

But I think the play goes off the rails. As it comes to a close, the environmental problems in the background come to the forefront and frame the end-of-life experiences of the characters. The world around the characters falls into social apocalypse: smoke, sirens, noise, hatred, scarcity.

I’m not against apocalypse. I love stories that end badly, whether it is Flannery O’Conner or your Hollywood blockbuster. 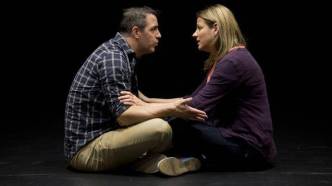 But this was a moment where the expository demon emerged. A great play—a brilliant play, really—went sideways, and the artfulness of the moment was lost as the narrative pixelated.

We don’t trust anything except words.

As Walter Ong said, “the Word became flesh, and we made him word again.” We have a cultural tendency, when there is something important to talk about, to only trust the talk.

It’s too bad: a play is word in flesh, where the narrative is the most important thing. Plays and films can be powerful social transformation tools, but only if we forget they are tools.

Picasso once said that art is a lie that tells the truth. We are talking here about art with ideas. The activist playwrights are passionate about social issues and terrified about a future that ignores the problems. The Christian filmmakers have a story that they think will transform all things to the good and want to share that. So they use their art as storytellers to try and share what is essential to them.

But in doing so they often fail to trust the story.

There are some good storytellers that take ideas head on. Margaret Atwood as a feminist writer, C.S. Lewis retelling myths in Till We Have Faces, and Marilynne Robinson recasting biblical narratives are three that come to mind. But there is nothing worse than reading a book or watching a film and discovering that we were being used.

Can there be good moralistic art? Perhaps, but only if the art is first and the moral emerges naturally from the art. Stories rooted in meaning must look sideways at their subject matter. There needs to be a self-forgetfulness about art that is about something.

We must exorcise the expository demon.

“A Pilgrim in Narnia” is a blog project in reading and talking about the work of C.S. Lewis, J.R.R. Tolkien, and the worlds they touched. As a "Faith, Fantasy, and Fiction" blog, we cover topics like children’s literature, apologetics and philosophy, myths and mythology, fantasy, theology, cultural critique, art and writing. This blog includes my thoughts as I read through Lewis and Tolkien and reflect on my own life and culture. In this sense, I am a Pilgrim in Narnia--or Middle Earth, or Fairyland. I am often peeking inside of wardrobes, looking for magic bricks in urban alleys, or rooting through yard sale boxes for old rings. If something here captures your imagination, leave a comment, “like” a post, share with your friends, or sign up to receive Narnian Pilgrim posts in your email box. Brenton Dickieson is a father, husband, friend, university lecturer, and freelance writer from Prince Edward Island, Canada. You can follow him on Twitter, @BrentonDana.
View all posts by Brenton Dickieson →
This entry was posted in Reflections and tagged art, Blue Like Jazz, C.S. Lewis, christianity and culture, Duncan Macmillan, Left Behind, Lungs, Margaret Atwood, Marilynne Robinson, pop culture, Steve Taylor, theatre, Theology of Culture, Till We Have Faces, writing. Bookmark the permalink.

55 Responses to The Problem with Moralistic Art: A Note on the Expository Demon