What Art is For: With C.S. Lewis and Dr. Charlie Starr

I am pleased to be presenting a paper at the International Society for Religion, Literature and Culture in Glasgow, Scotland. This great adventure is mostly to present some of my doctoral research on C.S. Lewis, focussing on his An Experiment in Criticism. It is also partly an opportunity to connect with other scholars in my field, and a small part to make my way to the area from which my family fled in 1819. It is a trip that is about ideas, people, and pilgrimage.

In preparation for my paper, I have been reading An Experiment in Criticism on a monthly basis. Last month I read it and did the strange experiment of pulling out a list of the books C.S. Lewis mentions in it—a kind of ad hoc “best of” list.

This month, I am writing up my thoughts about the book. Now that I have made my notes, I am now turning to what others have said about this little book. This journey was kind of a mixed bag for me. An Experiment in Criticism is prophetic of a lot of the instincts that culture would develop in literature, and yet it was largely ignored outside of a few literary critics. I think it’s a beautiful, funny, flawed and manifestly quotable book.

Yet, few have done serious work on it, and those who have turned to it have done so to think about Lewis’ ground-breaking work on fantasy and myth. There were also a surprising number of papers where the book was listed in the bibliography, but I could see no tangible link in the argument. Apparently, An Experiment in Criticism has been important to critics, but they have sometimes struggled to articulate what that influence means. 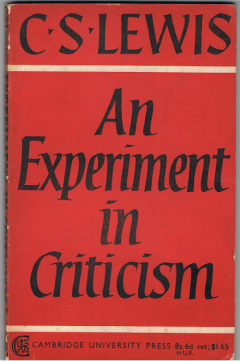 One of the clear statements came out of a paper by Charlie Starr in Inklings Forever VII, the papers from the 2010 C.S. Lewis & Friends Colloquium at Taylor University. I met Charlie at the 2012 Taylor conference and have talked here about his intriguing project of decoding C.S. Lewis’ handwriting. In this paper, Charlie is talking about “Aesthetics vs. Anesthesia: C.S. Lewis on the Purpose of Art.” It’s a good question. We have been toying with the problems with moralistic art here on A Pilgrim in Narnia, and Charlie hits it straight on.

A significant portion of the people who write to me are Christians who want to communicate their faith through stories–wanting to move “past watchful dragons,” culture’s unvoiced prejudices, as Lewis claimed Narnia could do. I understand that deep desire that artists-in-waiting have to evangelize in their work. You may be called to do that. But before you do, read Charlie’s treatment of one of Lewis’ points in An Experiment in Criticism:

… Lewis did not see the purpose of art to be the production of sermonic tropes or Christian propaganda. Even as viewers of art we shouldn’t look to see if there is a hidden Christian message in a movie or book. On the contrary, “The first demand any work of any art makes upon us is surrender. Look. Listen. Receive. Get yourself out of the way” (An Experiment in Criticism, 19). Writing specifically about literature, Lewis claims that whatever edification we get isn’t about finding truth in books: “To value them chiefly for reflections which they may suggest to us or morals we may draw from them, is a flagrant instance of ‘using’ [texts for our own purposes] instead of ‘receiving’” [ them for what they are] (An Experiment in Criticism, 82-83). Instead, great art is about a particular activity of imagination; it is about finding new ways of seeing—about seeing through the eyes of others:

The nearest I have yet got to an answer [to the question of literature’s value] is that we seek an enlargement of our being. We want to be more than ourselves. Each of us by nature sees the whole world from one point of view with a perspective and a selectiveness peculiar to himself….We want to see with other eyes, to imagine with other imaginations, to feel with other hearts, as well as with our own….My own eyes are not enough for me, I will see through those of others. Reality, even seen through the eyes of many, is not enough. I will see what others have invented….[I]n reading great literature I become a thousand men and yet remain myself….Here, as in worship, in love, in moral action, and in knowing, I transcend Myself; and am never more myself than when I do (An Experiment in Criticism, 137, 140-41). 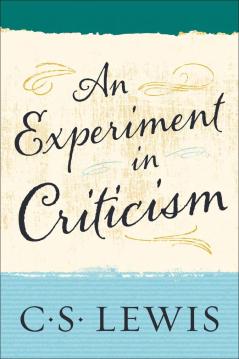 In short, Lewis very specifically rejects any view that “literature is to be valued…for telling us truths about life”15; instead, he values literature apart from its utilitarian purposes. This flies in the face of much contemporary Christian thinking about art and culture, both on popular and intellectual fronts. On the popular front are well meaning Christians who accept the model of “culture war”—we are in a battle that must be fought by governing what our kids are exposed to and protesting against films, songs and TV shows which are hostile to our point of view. On the intellectual front is an emphasis on “worldview analysis”—examining the worldviews behind artistic texts to point out there hidden assumptions or mine their truth value. And while both have their place, they fail to understand what art is for.

Read more about this question here and here. You can read more from Dr. Charlie Starr’s here. The paper is published in a collected volume called, C.S. Lewis and the Arts: Creativity in the Shadowlands (2013).

“A Pilgrim in Narnia” is a blog project in reading and talking about the work of C.S. Lewis, J.R.R. Tolkien, and the worlds they touched. As a "Faith, Fantasy, and Fiction" blog, we cover topics like children’s literature, apologetics and philosophy, myths and mythology, fantasy, theology, cultural critique, art and writing. This blog includes my thoughts as I read through Lewis and Tolkien and reflect on my own life and culture. In this sense, I am a Pilgrim in Narnia--or Middle Earth, or Fairyland. I am often peeking inside of wardrobes, looking for magic bricks in urban alleys, or rooting through yard sale boxes for old rings. If something here captures your imagination, leave a comment, “like” a post, share with your friends, or sign up to receive Narnian Pilgrim posts in your email box. Brenton Dickieson is a father, husband, friend, university lecturer, and freelance writer from Prince Edward Island, Canada. You can follow him on Twitter, @BrentonDana.
View all posts by Brenton Dickieson →
This entry was posted in Memorable Quotes, Original Research and tagged An Experiment in Criticism, art, C.S. Lewis, canon, Charlie Starr, fantasy, ISRLC, myth, mythopoiea, Reading, Taylor University. Bookmark the permalink.

33 Responses to What Art is For: With C.S. Lewis and Dr. Charlie Starr