It’s an interesting question. Cheesy lines, over-the-top acting, zippers up the back of the monster’s costume–how many films just like it have found their way into the Betamax bins of history? Yet, Star Wars lives–not only lives, but thrives, growing in popularity as its universe of characters grows. While the Marvel Universe films have become the kings of the opening weekend, Star Wars is still a giant in a land of grasshoppers.

Why did Star Wars stick? If we are to believe the writers of That ’70s Show, it is the keen action and the super duper special effects. But there is also something more. Watch the first little bit of the famous ’70s Show episode, “A New Hope.”

The entire episode is filled with nostalgia and hilarious throwbacks to the original series. The nostalgia continues to this day, from reproductions of Star Wars lunch boxes to celebrated Goodwill discoveries of Chewy pyjamas and broken light sabres. Though it was almost lost in the incredibly painful second film of the prequel series, Attack of the Clones, the third episode, Revenge of the Sith, begins to recover the things we loved most about the original three.

Almost. It is still a painful, painful prequel, but now we are living in new days altogether. We are two steps into the sequel trilogy, with The Last Jedi being a complex and perhaps failed film, though one I quite loved. The first two parts of the sequel are echoes or mirrors of the original series, and speculation is rife about Episode IX, coming Christmas 2019. Meanwhile, I’m content with what we have, having loved the standalone Rogue One–you gotta love a director who has the courage to kill almost every character on his payroll–and am both worried about and excited by the Ron Howard Solo coming up this month. I’d feel better if Brian Grazer was producing, because it looks like a Ron Howard film, but at least teh trailer gives us some new words of Wookie language.

This is all built, of course, on the tone set by the first J.J. Abrams episode, The Force Awakens. Predictably, it was filled with nostalgic moments:

Über critical fans did not like it, I think. To them, it looked like a commercial grab for the fans of the past blended with a technological capability George Lucas could only have dreamed of. Personally, I loved the new characters and think the visual technologies have finally found their home. Star Wars still fails to answer its own question of providential luck–characters in The Force Awakens find each other across staggering distances or in buildings of infinite complexity–and Rogue One, despite its apocalyptic air, still carries that part of the myth on. But I like how The Force Awakens is paced, and although there are huge gaps, and a gaff or two, it fits well into the Star Wars universe. More than nostalgic, it is framed up like a remake of A New Hope.

Imperial-class Star Destroyers wrenched into the sands of an alien world, Darth Vader’s mask from the flames, R2D2, the ping-pwang of laser fire: nostalgia, certainly. The deconstruction of the old series in The Last Jedi only adds to the nostalgia, even as it usurps it. But, nostalgia for what? There has to be something at the core of the series, beyond cheese and lights. Why has Star Wars stuck with us?

I think the answer is hidden in this long lost trailer from 1977.

In the days after Saturday Night Live and Spaceballs and The Simpsons, it’s hard not to imagine going into the theatre in 1977 and expecting a spoof. Perhaps we’ve lost our innocence as a culture these days.

And it is also easy to forget how far special effects has come. When you live in a generation where you can use shareware software to stage an at-home light sabre battle for Youtube, 20th-century effects won’t impress us much. Think of Hugo, The Life of Pi, Inception, and The Jungle Book–an almost random collection of films from this decade from four different genres that have special effects unlike anything imagined by the human race in my childhood. 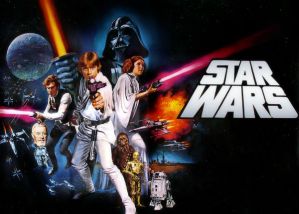 But it isn’t just effects is it?.

The films that visually impressed me the most growing up–Toy Story, the Lord of the Rings trilogy, The Matrix, Shrek, and, more recently, Inception–had more to them than technology. 2012 is a good example of a film with no story and a pretty dumb premise but pretty good effects.

No, I think the reason we love Star Wars is that it goes deeper into our cultural consciousness than we can imagine. Look at the stunning statements made by the trailer:

“an adventure unlike anything on your planet”

“the story of a boy, a girl, and a universe”

“a big, sprawling space saga of rebellion and romance”

“it’s a spectacle light years ahead of its time”

“a billion years in the making: Star Wars”

Then the flash of light.

George Lucas is, I think, at the deepest level, a mythmaker. He certainly is a genius SciFi world-builder. He takes the universe-changing work of Larry Niven and Frank Herbert to a new level with his own mythic Empire. But while Ringworld and Dune are set in the future, Star Wars is set in the deep past.

In this sense, I think that as much as George Lucas relies on the SF masters, he is also a deep reader of the master myth-maker: J.R.R. Tolkien. Tolkien understood the project of mythopoiea at the most intimate level, shaping Middle Earth out of a worldview that is entirely consistent with itself. Moreover, Tolkien’s project does what myth always does: it tells us about the present world. Myths are never really buried in the past. True myths, the good ones, will resonate again and again through cultures that appear long after the myth-making culture has slipped into legend.

That’s why I think Star Wars has lasted. Beyond big names and big budgets and super duper effects, when you watch Star Wars you get the sense that it really is a film “a billion years in the making.” It is a story that tells all our stories, a myth speaks to us today. For all their flaws, I think Rian Johnson and J.J. Abrams get the myth in us. I guess well know next Christmas.

At the centre, then, it is not just about nostalgia, but about our deepest realities of being human.  May the 4th be With You always!

“A Pilgrim in Narnia” is a blog project in reading and talking about the work of C.S. Lewis, J.R.R. Tolkien, and the worlds they touched. As a "Faith, Fantasy, and Fiction" blog, we cover topics like children’s literature, apologetics and philosophy, myths and mythology, fantasy, theology, cultural critique, art and writing. This blog includes my thoughts as I read through Lewis and Tolkien and reflect on my own life and culture. In this sense, I am a Pilgrim in Narnia--or Middle Earth, or Fairyland. I am often peeking inside of wardrobes, looking for magic bricks in urban alleys, or rooting through yard sale boxes for old rings. If something here captures your imagination, leave a comment, “like” a post, share with your friends, or sign up to receive Narnian Pilgrim posts in your email box. Brenton Dickieson is a father, husband, friend, university lecturer, and freelance writer from Prince Edward Island, Canada. You can follow him on Twitter, @BrentonDana.
View all posts by Brenton Dickieson →
This entry was posted in Fictional Worlds, Reviews and tagged #MayThe4thBeWithYou, A New Hope, Dune, film, George Lucas, J.R.R. Tolkien, Larry Niven, May the Fourth, myth, mythopoiea, Ringworld, Ron Howard, Science Fiction, Star Wars, That '70s Show, The Force Awakens. Bookmark the permalink.

10 Responses to Why Did Star Wars Stick? #MayThe4thBeWithYou #StarWarsDay