Panel on C.S. Lewis’ “The Quest of Bleheris” at the C.S. Lewis and Friends Colloquium

I am currently working in the Marion E. Wade Center–the premier C.S. Lewis archival research space on the continent and a lovely little spot that houses materials by and about the British authors that are the primary focus on this blog: C.S. Lewis, George MacDonald, Dorothy L. Sayers, J.R.R. Tolkien, Charles Williams, G.K. Chesterton, and Owen Barfield (who I really should blog about). I have had a wonderful 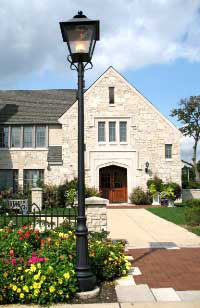 and exhausting day at the Wade, attending to commas and semicolons and superscript additions to obliterated text in a manuscript known as The Quest of Bleheris. This little-known work of C.S. Lewis is his first attempt at writing a novel–an Arthurian adventure in William Morris style that got as far as the 17th chapter. Lewis was a teen writer at the time, testing his voice as a critic and reader as he was expanding his imaginary bookshelf.

I blogged earlier this month about some conference presentations on C.S. Lewis and L.M. Montgomery, and am blogging on Thursdays about Montgomery’s imaginative worlds. One of these conferences is the superb C.S. Lewis & Friends Colloquium at Taylor University. I can’t say enough good things about Taylor–not just because they have an excellent Inklings archival collection, including work by Lewis and MacDonald, but because it is a space where emerging scholars are welcomed and supported. It’s a beautiful thing, and I’m pleased to be presenting a bit of my work on The Quest of Bleheris. I’ve included the abstract below and we are doing the presentation in an unusual way. We’ll be joined by Dr. David C. Downing, upcoming Co-Director of the Wade, and an excellent novelist and literary critic. David was one of the first to really focus on Bleheris as an important moment in Lewis’ development. Though she can’t be there in person, the presentation also includes work by Jenn Raimundo, recent graduate of Signum University’s global-leading MA program in Imaginative Literature.

I hope I’ll get to see you at Taylor. If not, my work on The Quest of Bleheris is moving toward publication so I will let you know when it comes to the press. 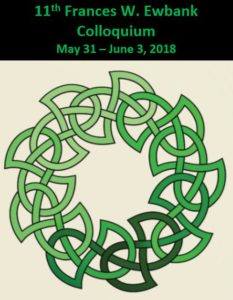 Panel: The Quest of Bleheris

Each week between May and October of 1916, a seventeen-year-old C.S. Lewis included with his weekly letter to his best friend, Arthur Greeves, a chapter of an Arthurian romance he was working on. This 19,000-word unpublished manuscript was left incomplete after seventeen chapters, but is an evocative piece. As Lewis’ first attempt at long-form prose fantasy, written in the style of William Morris, The Quest of Bleheris emerges out of a rich and exciting time in Lewis’s life. Studying under the Great Knock, Lewis is thriving in his literary world and testing out his authorial voice with his best friend. In this period, Lewis has just encountered George MacDonald’s Phantastes, declared his atheism to Arthur, decided to enter the war, and prepared for entrance to Oxford. More than just teen fan fiction, The Quest of Bleheris is a resource for understanding Lewis’ spiritual development and charting his growth as a critic and imaginative writer.

Brenton D.G. Dickieson is writing a PhD dissertation on C.S. Lewis’s narrative spiritual theology at the University of Chester. Brenton has previously published the “Ransom Preface” to The Screwtape Letters and writes the blog, http://www.aPilgrimInNarnia.com. In preparation for the publication of the manuscript, Brenton will look at the context of the emergence of The Quest of Bleheris in Lewis’ life, exploring literary links in Lewis’ own work and in the books he read.

David C. Downing is the current R. W. Schlosser Professor of English at Elizabethtown College, but will become Co-Director of Wheaton College’s Marion E. Wade Center with Dr. Crystal Downing on July 1st. Besides being an international speaker, he has published widely on C.S. Lewis, including The Pilgrim’s Regress by C. S. Lewis: The Wade Annotated Edition and The Most Reluctant Convert: C.S. Lewis’s Journey to Faith, which includes a chapter on The Quest of Bleheris. David will present the Bleheris fragment as a glimpse into Lewis’s mind and heart at that stage of his spiritual journey, exploring Romantic and religious allusions in the text.

Jennifer Raimundo is an Inklings researcher, recently completing her M.A. from Signum University with a thesis on Tolkien’s “Lost Road.” She has written on C.S. Lewis and Charles Williams, and has presented at Taylor on “Native Language in a Strange Country: Death and Rebirth in the Friendship of C.S. Lewis and Charles Williams,” now in Inklings Forever X. Jennifer will provide a resource on exploring Courage and Cowardice in The Quest of Bleheris with reference to Lewis’s contemporary poetry.

Note: The hand-drawn facsimile of the header of The Quest of Bleheris in manuscript form was created by Katie Stevenson, who also did some manuscript help for Sørina Higgins’  The Chapel of the Thorn during her visit to the Wade centre in 2014.

“A Pilgrim in Narnia” is a blog project in reading and talking about the work of C.S. Lewis, J.R.R. Tolkien, and the worlds they touched. As a "Faith, Fantasy, and Fiction" blog, we cover topics like children’s literature, apologetics and philosophy, myths and mythology, fantasy, theology, cultural critique, art and writing. This blog includes my thoughts as I read through Lewis and Tolkien and reflect on my own life and culture. In this sense, I am a Pilgrim in Narnia--or Middle Earth, or Fairyland. I am often peeking inside of wardrobes, looking for magic bricks in urban alleys, or rooting through yard sale boxes for old rings. If something here captures your imagination, leave a comment, “like” a post, share with your friends, or sign up to receive Narnian Pilgrim posts in your email box. Brenton Dickieson is a father, husband, friend, university lecturer, and freelance writer from Prince Edward Island, Canada. You can follow him on Twitter, @BrentonDana.
View all posts by Brenton Dickieson →
This entry was posted in L.M. Montgomery, News & Links, Original Research and tagged archival research, C.S. Lewis, Charles Williams, david downing, Dorothy L. Sayers, g k chesterton, George MacDonald, J.R.R. Tolkien, L.M. Montgomery, Marion E. Wade Center, owen barfield, research, The Quest of Bleheris, William Morris. Bookmark the permalink.

15 Responses to Panel on C.S. Lewis’ “The Quest of Bleheris” at the C.S. Lewis and Friends Colloquium