Posted on October 31, 2018 by Brenton Dickieson

Isn’t that the coolest name? Quarry Hollow. So lovely and evocative and spooky. I wish I had been there at night to take a proper Hallowe’en picture.

I took this picture when I was cutting through some alleys in the Headington area so I could find my way to C.S. Lewis’ grave. Earlier this month, on a particular Friday in Oxford, the sun was shining and I was looking toward to a day at the archive. But the next day, Saturday,  called for pouring rain. So I switched my plans up and decided to spend Friday wandering around Oxford and Saturday in the archive. It was a beautiful autumn day thousands of miles from where I live at the centre of a new generation of fantasy literature. 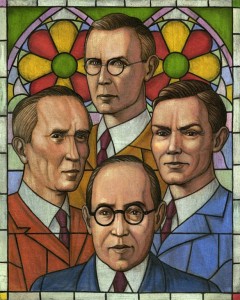 So, naturally, I decided to visit the Inklings’ graves.

Last week was the first time I ever made this sort of pilgrimage, a journey through Oxford by visiting the graves of the Oxford Inklings. This circle of scholars and writers gave us The Lord of the Rings and Narnia, but in a much broader sense created a culture of critical creativity from a broad Christian tradition that deepened theological perspectives, challenged cultural norms, and opened up new ways of telling stories. No doubt I have missed some essential figures, but this is how I spent my afternoon and evening.

I begin with Hugo Dyson–partly because I found his grave by accident, and partly because, honestly, who thinks of Hugo? Holywell Cemetery had a very spooky sign but I forgot to take a picture. Holywell is the long-term home of Kenneth Grahame, James Blish, Austin Farrar (an Inkling I didn’t find), Max Müller, and other legendary lights. Famous women, apparently, place their restful bones elsewhere. But there is also Hugo Dyson, famous for helping lead C.S. Lewis to Christ and for his great impatience with Tolkien’s elves. So here is the gravestone of Hugo and Margaret Dyson.

But Holywell’s main attraction, for me, was the gravestone of Charles Williams. Could there be an Inkling more fitting for a cemetery scene? Even in life, he lived in the liminal space between the living and the dead. Here is the headstone that tells its final tale.

Though this is pretty normal in UK graves, I find it a bit creepy there is a footstone too, as if trying to keep the corpse in. The initials on that footstone, covering its ancient bone digits, is CWSW: Charles Walter Stansby Williams. Joined with him in mouldering depths is his wife, “Michal,” who survived him by 25 years, and his son who lived to see a new century dawn. 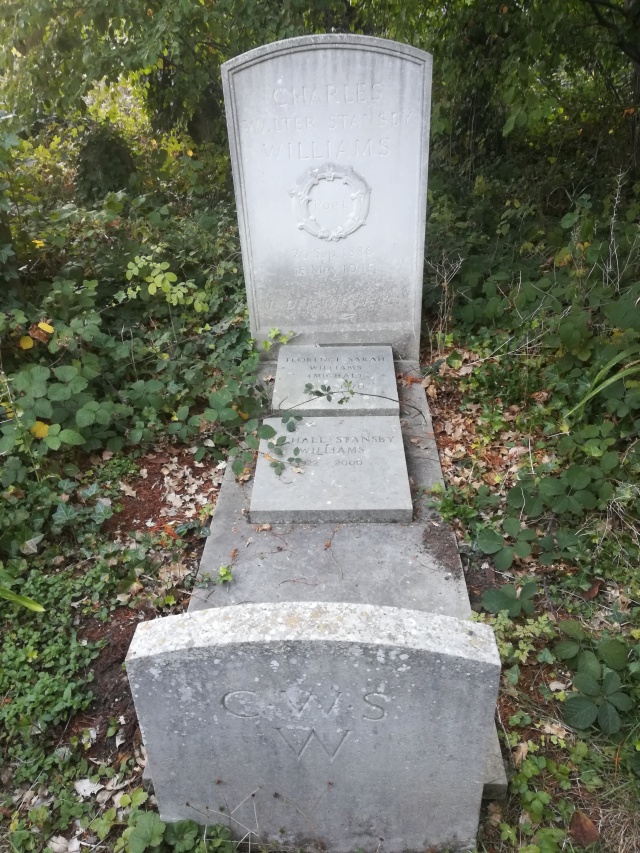 Holywell Cemetery is at the centre of old Oxford but other Inklings lay at the edges. About 3 miles north is Wolvercote Cemetery. This is the resting area of Edith Tolkien and her mythopoeic mate, the creator of Middle-earth. I actually had trouble finding the Tolkien memorial in the Roman Catholic section of the cemetery. Wandering though, I found this forested graveyard, a tiny woods of organic memorials.

I also found a very sad space that terrified me a little: an active, living memorial for lost children in Wolvercote.

Eventually, I found my way to the grave of the Tolkiens.

There they are, Edith and John Ronald, Beren and Lúthien, a grave filled with flowers and notes from fans and followers. More than a gravestone, this is a shrine, a place to remember the one who had transformed our understanding of what was possible in imaginative literature.

From Wolvercote Cemetery, with its children’s memorial and Catholic section and Jewish gravestones, I went east to Headington Hill. Headington was, of course, the community of J.R.R. Tolkien (in much of the 50s and 60s), C.S. Lewis (from 1922 to his death in 1963), and Hermione Granger (dates unknown, but from the 90s until sometime before she became a political leader). In particular, Headington Hill is the home of the Kilns, the house of C.S. Lewis and his brother Warren, and their nearby Holy Trinity Church at Headington Quarry.

It was here I found Quarry Hollow, a pathway near the entrance to Holy Trinity’s church walk, which is really quite lovely. 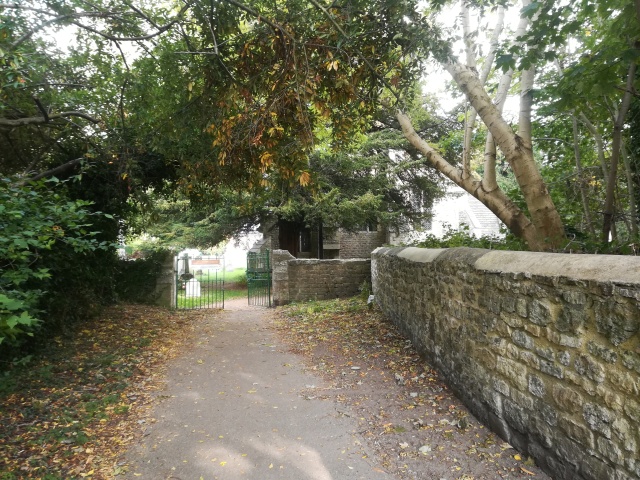 I will come back another day to this church, I think, but it is a Victorian stone chapel in the midst of a graveyard. It is in this cemetery where we find Inklings brothers, Clive Staples and Warren Hamilton Lewis. I first encountered the war memorial which opens the visitor up to the entire graveyard.

And, after wandering for a few minutes, I found the Lewis grave. Warnie and Jack are buried together, in the same grave, sharing a memorial that was so important to their history.

“Men must endure their going hence.” It is a quotation in King Lear V.II, from the mouth of Edgar. Shakespeare was an interest to Lewis, but it was also the quote from a quotation calendar on the day their mother, Flora Hamilton Lewis, died on 23 Aug 1908. While much can be said about the Inklings, their legacy, and the way they led for mortal eyes, but perhaps Edgar has said it best.

The Inklings, there they rest. But, of course, Oxford is alive with the dead. Because I was hosted for part of my tour by another Inklings scholar, perhaps we should end with the Shelley memorial. With a pigeon.

“A Pilgrim in Narnia” is a blog project in reading and talking about the work of C.S. Lewis, J.R.R. Tolkien, and the worlds they touched. As a "Faith, Fantasy, and Fiction" blog, we cover topics like children’s literature, apologetics and philosophy, myths and mythology, fantasy, theology, cultural critique, art and writing. This blog includes my thoughts as I read through Lewis and Tolkien and reflect on my own life and culture. In this sense, I am a Pilgrim in Narnia--or Middle Earth, or Fairyland. I am often peeking inside of wardrobes, looking for magic bricks in urban alleys, or rooting through yard sale boxes for old rings. If something here captures your imagination, leave a comment, “like” a post, share with your friends, or sign up to receive Narnian Pilgrim posts in your email box. Brenton Dickieson is a father, husband, friend, university lecturer, and freelance writer from Prince Edward Island, Canada. You can follow him on Twitter, @BrentonDana.
View all posts by Brenton Dickieson →
This entry was posted in Thoughtful Essays and tagged Austin Farrar, Beren and Lúthien, C.S. Lewis, Charles Williams, graveyards, Halloween, Hugo Dyson, Inklings, J.R.R. Tolkien, James Blish, Joy Davidman, Kenneth Grahame, Lord of the Rings, Max Müller, Narnia, Oxford, Percy Bysshe Shelley, Warren Lewis. Bookmark the permalink.

48 Responses to Inklings Graves in Oxford