Posted on December 21, 2018 by Brenton Dickieson

What resulted was a couple of hours of conversation about the film. I hope that you enjoy! 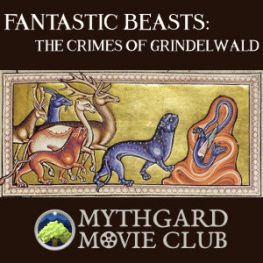 Kelly Orazi is a longtime bookseller, reader, and Signum Grad School student. She spends her days reading Harry Potter, pretending she has the Force, and hanging out with her dog, Lupin. She is descended from a real-life wandmaker, but has yet to embark on the journey of making her own lightsaber.

Emily Strand is a professor of Comparative Religions at Mt. Carmel College of Nursing in Columbus, OH, where she also serves the Catholic diocese as a Master Catechist. Besides her books on liturgy, she has published articles on the Harry Potter series, including a contribution to Harry Potter for Nerds 2, and many essays at HogwartsProfessor.com. She has appeared on the Mugglenet Academia podcast and is a frequent guest on the Reading Writing Rowling podcast.

Brenton Dickieson is working on a PhD on the theology of C.S. Lewis’ fictional worlds and writes the blog, http://www.aPilgrimInNarnia.com. He lives in the almost fictional land of Prince Edward Island, where he teaches and consults in higher education.

Curtis Weyant is a Signum Grad School alumnus whose daughter tried to teach him the magic spells at The Wizarding World of Harry Potter in Orlando, but never quite got the hang of it. A digital marketer by trade, he co-hosts the weekly podcast Kat & Curt’s TV Re-View and occasionally pecks away at his own creative work.

“A Pilgrim in Narnia” is a blog project in reading and talking about the work of C.S. Lewis, J.R.R. Tolkien, and the worlds they touched. As a "Faith, Fantasy, and Fiction" blog, we cover topics like children’s literature, apologetics and philosophy, myths and mythology, fantasy, theology, cultural critique, art and writing. This blog includes my thoughts as I read through Lewis and Tolkien and reflect on my own life and culture. In this sense, I am a Pilgrim in Narnia--or Middle Earth, or Fairyland. I am often peeking inside of wardrobes, looking for magic bricks in urban alleys, or rooting through yard sale boxes for old rings. If something here captures your imagination, leave a comment, “like” a post, share with your friends, or sign up to receive Narnian Pilgrim posts in your email box. Brenton Dickieson is a father, husband, friend, university lecturer, and freelance writer from Prince Edward Island, Canada. You can follow him on Twitter, @BrentonDana.
View all posts by Brenton Dickieson →
This entry was posted in News & Links and tagged Fantastic Beasts and Where to Find Them, Fantastic Beasts: The Crimes of Grindelwald, Harry Potter, J.K. Rowling, Jude Law, Mythgard Academy, Signum University, The Crimes of Grindelwald. Bookmark the permalink.