Readings from J.R.R. Tolkien’s Tale Of Beren and Lúthien, with The Center from the Study of C.S. Lewis and Friends

Hi folks. This event is past, but The Center for the Study of C.S. Lewis and Friends at Taylor University are having a digital Inklings “tea” on Friday’s at 4pm. They are an archive, a host of strong Inklings-informed study program that includes student and faculty research, and host the biannual Taylor Lewis & Friends conference. If you would like to join in on future “digital teas,” get on their mailing list by emailing: cslewiscenter@taylor.edu.

I have once before made this bold declaration:

“I don’t think I have ever read anything better than the tale of Beren and Lúthien.”

I still love it, having read it through for class preparation this spring. And now the Center for the Study of C.S. Lewis & Friends at Taylor University in Upland, IN is having a digital “tea” with the Beren and Lúthien at the core of it. We will take turns doing some readings in a Zoom gathering, sharing from Tolkien’s letters, The Lord of the Rings, The Silmarillion, and “The Lay of Leithian.”

This is a free, online event. Check out the Facebook page here, and email the Center for a Zoom link (cslewiscenter@taylor.edu). 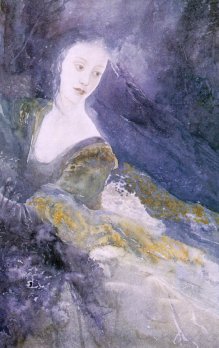 And though it is not what I’m reading, here is a little bit I like:

The leaves were long, the grass was green,
The hemlock-umbels tall and fair,
And in the glade a light was seen
Of stars in shadow shimmering.
Tinúviel was dancing there
To music of a pipe unseen,
And light of stars was in her hair,
And in her raiment glimmering.

There Beren came from mountains cold,
And lost he wandered under leaves,
And where the Elven-river rolled
He walked alone and sorrowing.
He peered between the hemlock-leaves
And saw in wonder flowers of gold
Upon her mantle and her sleeves,
And her hair like shadow following.

Enchantment healed his weary feet
That over hills were doomed to roam; … 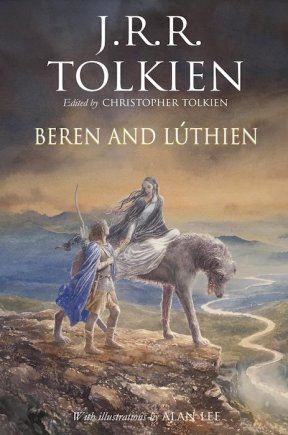 The tale of Beren and Lúthien was, or became, an essential element in the evolution of The Silmarillion, the myths and legends of the First Age of the World conceived by J.R.R. Tolkien. Returning from France and the battle of the Somme at the end of 1916, he wrote the tale in the following year.

Essential to the story, and never changed, is the fate that shadowed the love of Beren and Lúthien: for Beren was a mortal man, but Lúthien was an immortal elf. Her father, a great elvish lord, in deep opposition to Beren, imposed on him an impossible task that he must perform before he might wed Lúthien. This is the kernel of the legend; and it leads to the supremely heroic attempt of Beren and Lúthien together to rob the greatest of all evil beings, Melkor, called Morgoth, the Black Enemy, of a Silmaril.

In this book Christopher Tolkien has attempted to extract the story of Beren and Lúthien from the comprehensive work in which it was embedded; but that story was itself changing as it developed new associations within the larger history. To show something of the process whereby this legend of Middle-earth evolved over the years, he has told the story in his father’s own words by giving, first, its original form, and then passages in prose and verse from later texts that illustrate the narrative as it changed. Presented together for the first time, they reveal aspects of the story, both in event and in narrative immediacy, that were afterwards lost.

Published on the tenth anniversary of the last Middle-earth book, the international bestseller The Children of Húrin, this new volume will similarly include drawings and color plates by Alan Lee, who also illustrated The Lord of the Rings and The Hobbit and went on to win Academy Awards for his work on The Lord of the Rings film trilogy. 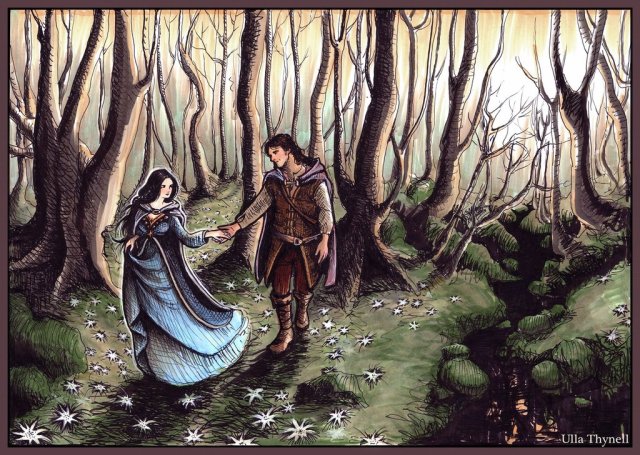 “A Pilgrim in Narnia” is a blog project in reading and talking about the work of C.S. Lewis, J.R.R. Tolkien, and the worlds they touched. As a "Faith, Fantasy, and Fiction" blog, we cover topics like children’s literature, apologetics and philosophy, myths and mythology, fantasy, theology, cultural critique, art and writing. This blog includes my thoughts as I read through Lewis and Tolkien and reflect on my own life and culture. In this sense, I am a Pilgrim in Narnia--or Middle Earth, or Fairyland. I am often peeking inside of wardrobes, looking for magic bricks in urban alleys, or rooting through yard sale boxes for old rings. If something here captures your imagination, leave a comment, “like” a post, share with your friends, or sign up to receive Narnian Pilgrim posts in your email box. Brenton Dickieson is a father, husband, friend, university lecturer, and freelance writer from Prince Edward Island, Canada. You can follow him on Twitter, @BrentonDana.
View all posts by Brenton Dickieson →
This entry was posted in Fictional Worlds, News & Links and tagged Beowulf, Beren and Lúthien, Christopher Tolkien, fantasy, Fictional Universes, J.R.R. Tolkien, Lord of the Rings, The Silmarillion, writing. Bookmark the permalink.

20 Responses to Readings from J.R.R. Tolkien’s Tale Of Beren and Lúthien, with The Center from the Study of C.S. Lewis and Friends