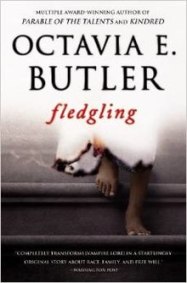 This generation has seen the reinterpretation of vampire fiction in significant ways as these punk figures went pop. Not since Anne Rice’s 1976 Interview with the Vampire, however, have we seen such a deepening of the psychological intimacy of the vampiric experience as we do in Octavia Butler’s standalone novel, Fledgling.

Fledgling was published the same year as Stephanie Meyers’ bestselling book Twilight and the third installation of the Dracula 2000 film series. Butler’s SciFi tale strips the supernatural elements from science fiction and recentres the story from the classical questions of alien otherness and hunter-prey to an image of “symbiosis”–the intimate relationship between the vampiric species, the Ina, and their living human partners, their Symbionts. Like classic vampire tales, in Butler’s speculative universe, the Ina have superhuman but not godlike strength and speed, the need to feed on human blood, rapid healing powers, and an allergy to light. They are longlivers, as the stories go, but most of the folklore around vampires is reduced to superstition grown out of historic contact between humans and Ino, or at best a kind of myth. Ina and humans are separate species, obviously evolutionary cousins, but not capable of reproducing naturally, and humans cannot become Ina through a bite.

Butler’s deepest transformation of the genre, however, is not merely in creating a biofiction tale. Butler imagines not a master-slave or hunter-prey relationship, but one of intimate reciprocal need. There are other stories that challenge these tropes, such as how Buffy the Vampire Slayer the “hunter” image upside down in the hit TV series. What Butler does, though, is make the deep, meaningful connection between Ina and the humans they gather in their family unit an absolute and lifelong necessity. When an Ina bites a human, the human begins to be addicted to the exchange of blood and saliva, and eventually will die if cut off from their Ina’s bite. Moreover, Ina don’t just need humans for food, but need physical touch and companionship from their particular small family group. They can feed for awhile on random humans–what they call grazing–but they will shrivel up and die without their symbionts. On a very practical level, Ina need human Symbionts for protection, as daylight remains deadly and the community is historically vulnerable to violence.

Through the eyes of an amnesiac protagonist, Shori, the reader awakens into this new world slowly, learning as Shori learns. As an experiment in genetic design, Shori is the result of splicing African genes within the Ina core in order to weaken the sun’s effect. Shori becomes an Ina flashpoint, inspiring violence from some who resist the mixing of pure blood or weakening of the Ina line.

As with many of Butler’s stories, the tale becomes a complex mix of navigating racism–also speciesism in this case–and how deeply implicated we are with one another. I write this now as America is on fire in social media passion, public debates, peaceful protests, street riots, and authoritarian violence. Whatever simple solutions and pious pronouncements media pundits and social media warriors might offer, as a Black American woman writing science fiction, nearly alone in her endeavour, Butler reminds us of how intricately connected we are with one another. Butler’s work in Fledgling, the Xenogenesis and Patternist cycles, and in some of her vampiric short stories show us more deeply than any parable or allegory or speech could how invested we are in racism and division. However, Butler never offers a simple way forward, for we are all “Symbionts” of one another in myriad ways. 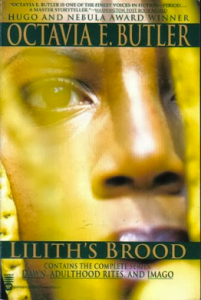 Though the intensely individual perspective of the novel leads for some talky moments, Fledgling is one of Butler’s strongest novels in terms of prose and world development. Like many of Butler’s protagonists, Shori is inhumanely strong and gifted as well as deeply flawed. Neither overcoming nor giving in to her flaws, however, will get Shori what she wants, and she must learn to trust others and work with them in her fight against injustice. Because Shori is waking to the world, the climax of the novel feels like the beginning of the tale–like Fledgling is a prequel or first novel of a series. I wish there was more, frankly. This is hardly a negative comment, but I also felt like we needed more detail in some parts of the book, as well as more frequent movements of conflict to click the novel forward. I never fully connected with Shori in the way I connected with Anyanwu (and even Doro and Isaac) in Wild Seed (1980) or Lilith Iyapo in the Xenogenesis trilogy (1987-89).

While imperfect, Fledgling is in my mind the novel where Butler’s most important themes come together in a single story. I will leave to others the ways that Butler could speak to the current social moment, but Fledgling is an important book from a compelling and skillful author. I don’t know if the genre can survive the teen angst emo vampire trend and the many terrible classic remakes of the last 15 years. Butler’s Fledgling, however, shows us that there are rich new inventions of a classic tale worth retelling.

“A Pilgrim in Narnia” is a blog project in reading and talking about the work of C.S. Lewis, J.R.R. Tolkien, and the worlds they touched. As a "Faith, Fantasy, and Fiction" blog, we cover topics like children’s literature, apologetics and philosophy, myths and mythology, fantasy, theology, cultural critique, art and writing. This blog includes my thoughts as I read through Lewis and Tolkien and reflect on my own life and culture. In this sense, I am a Pilgrim in Narnia--or Middle Earth, or Fairyland. I am often peeking inside of wardrobes, looking for magic bricks in urban alleys, or rooting through yard sale boxes for old rings. If something here captures your imagination, leave a comment, “like” a post, share with your friends, or sign up to receive Narnian Pilgrim posts in your email box. Brenton Dickieson is a father, husband, friend, university lecturer, and freelance writer from Prince Edward Island, Canada. You can follow him on Twitter, @BrentonDana.
View all posts by Brenton Dickieson →
This entry was posted in Reviews and tagged Buffy the Vampire Slayer, Fledgling, Octavia E. Butler, Twilight, Vampire Fiction, vampires. Bookmark the permalink.