Binti is the award-winning novella of a young African woman with a special gift enhanced and challenged by her rugged stubbornness, deep love, and dynamic intelligence. Binti’s community is closely modelled on the Himba people of southwest Africa, including the special braiding of her hair and the red-clay otjize that coats her skin for beauty, protection, and an embodied sense of culture. Binti is a “master harmonizer,” someone who is able to use a genius for mathematics, a training in advanced technological development, and the customs of her people to “speak” into the world, bringing people and worlds together in harmony or challenge.

In the first book, Binti sneaks off to be the first of her tribe to attend the interstellar university, Oomza Uni, which fills a planet far from the deserts of Africa. While in flight, Binti and her entire cohort from Earth are killed by Medusa-like beings (the Meduse) who are enemies of the dominant ethnic group in Binti’s area, the Khoush (Ethiopian descendants perhaps, or Northeast Africa?). All of her Khoush peers and professors are killed, but because of an ancient technology and her own wits, Binti lives. 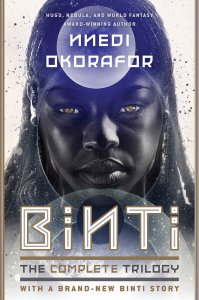 As a harmonizer, Binti finds herself, in this story and the following ones, drawn into the role of peacemaker. The role involves great risk. One risk is that Binti is put in mortal danger and significant pain a number of times. But there are deeper risks. Binti is alienated from her peers, her family, her homeland, and her sense of self. Each time she works as a harmonizer, her identity grows more complex, troubled, and strange. Her sense of personhood gets drawn into the deep past, into the concerns of honour and courage of different peoples, and into the physiology of alien beings. The series is less about the texture of what I call “deep futurism,” or a particular set of adventures. Instead, the Binti trilogy is about the title character and her sense of self in a mysterious universe.

While Binti’s world is far into the future and involves complex identity matrices, the series is more in Octavia Butler‘s tradition than N.K. Jemisin‘s, in my reading. As she creates or receives biological changes that innervate symbiotic relationships with other people or species, these changes shake her–and our–understanding of what it means to be human. In this sense, Okorafor’s work is an important exploration of transhumanism. The Binti series works beautifully as a literary version of the Ship of Theseus Paradox, exploring the question of personhood and individuality, while also troubling our understanding of how to relate to the “Other”–something that science fiction is brilliant at that Okorafor, Butler, and Jemisin take to new heights of beauty and interest.

Binti comes to me as a gift emerging from the current moment. I found N.K. Jemisin and Octavia Butler with no sense of who they were as people, but I hunted out Nnedi Okorafor’s work because she is a Nigerian-American SF writer. I may have stumbled onto her work eventually, as I heard about Lagoon in researching Afrofuturism and heard Okorafor’s name on CBC. But I wouldn’t have hunted down the first book, Binti, one the Hugo and Nebula awards for best novella. It’s not an award category that I pay attention to, apparently to my own detriment!

While I discovered Binti because it was recommended as an example of Black women writing SF, it has none of the “model book” syndrome that can occur in the warp and weft of social movements–particularly if they are struggling out of a space of limitation. Binti is an intricately imagined character with a beautifully crafted book tucked in around her. And although three African tribes seem to make up all that is left of Terran-Instersteller relations in this imagined future, and though Binti’s own gift as a “harmonizer” could have been overplayed, there is no misty-eyed romanticism here. Binti is fierce in peace as in justice, rugged and independent and yet rooted deeply in tradition and family. Okorafor uses the Himba people as a model for the root of Binta’s deep future identity. She, like her people, have flaws and limitations and things to learn, but these flaws are written in a way to quicken the pulse of the reader and to help Binti find her own way. 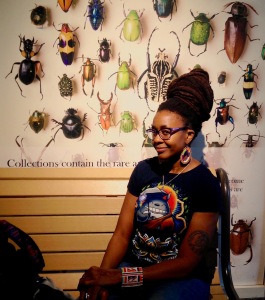 I know I have glowed quite a bit in this review. Though I am thrilling with the experience of reading, it isn’t that the series is perfect. The experimental use of voice works pretty well, though some of the shifts are less elegant than others. It is at times difficult to keep track of, particularly as we are introduced to new worlds through discovery or waking. Pacing-wise, the three books work far better as a single, moderately-long novel. Beyond the fact that voracious SF readers will respond well to the 400-page version, the series of heights work well as a character-driven (rather than plot-driven) episodic novel. The three-story bundle also tempers an inordinately long denouement in The Night Masquerade. That said, if I was thinking of adaptation, I’d be optioning it for a Netflix-style serial rather than a blockbuster film. I hope it happens: Binti could live far past these few pages.

So this is a good book. It has such a nice script; living characters leap off the page. The Binti cycle also hits so many of the notes of today: Afrofuturism, Deep Futurism, Black Women as a force in “hard” science fiction, feminism, local and global identity, race, religion, and culture, transhumanism, and intersectionality. Binti is a powerful book for the moment. 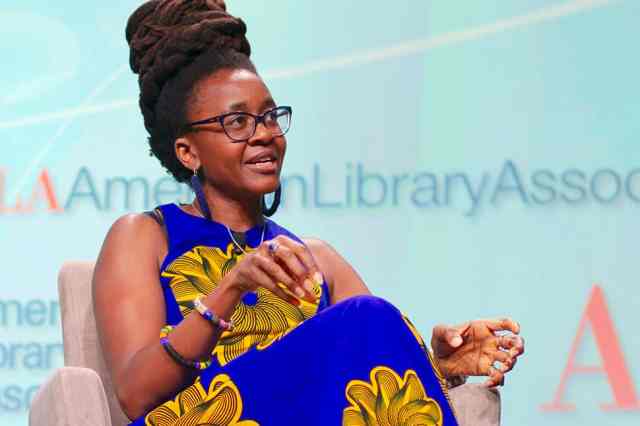 “A Pilgrim in Narnia” is a blog project in reading and talking about the work of C.S. Lewis, J.R.R. Tolkien, and the worlds they touched. As a "Faith, Fantasy, and Fiction" blog, we cover topics like children’s literature, apologetics and philosophy, myths and mythology, fantasy, theology, cultural critique, art and writing. This blog includes my thoughts as I read through Lewis and Tolkien and reflect on my own life and culture. In this sense, I am a Pilgrim in Narnia--or Middle Earth, or Fairyland. I am often peeking inside of wardrobes, looking for magic bricks in urban alleys, or rooting through yard sale boxes for old rings. If something here captures your imagination, leave a comment, “like” a post, share with your friends, or sign up to receive Narnian Pilgrim posts in your email box. Brenton Dickieson is a father, husband, friend, university lecturer, and freelance writer from Prince Edward Island, Canada. You can follow him on Twitter, @BrentonDana.
View all posts by Brenton Dickieson →
This entry was posted in Fictional Worlds, Reviews and tagged Afrofuturism, Binti, CBC, Deep Futurism, Lagoon, Neil Gaiman, Nnedi Okorafor, The Night Masquerade, Transhumanism. Bookmark the permalink.