“A Very Mean Rank”: William Shakespeare, Brian Grazer, and Biographies that are Too Good to be True

Posted on March 2, 2021 by Brenton Dickieson 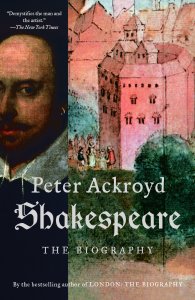 As background to my year of reading Shakespeare (one play a month), I am reading Peter Ackroyd’s biography of Shakespeare. As in all of Akroyd’s historical writing, it is accessible, thoughtful, and remarkably quick-moving for a long book. He writes little vignettes of history–as if each chapter is a 1- to 25-page write-up of various research folders that work as stories on their own. These little notes could be based on the church records of a traitorous priest, conversations about the Domesday Book, geological discoveries in a particular locale, detailed close-reading of a poem, farmer’s almanac-type speculations about the season when rabbits are in heat or elms can be transplanted, the very fine research of a scholar of interest, historical notes about how paving stones are placed in the high street, testimonies from the grandson of a ferrier who knew someone of import, and, occasionally, the actual diaries and state records we would hope are part of historical writing. These notes–against all feeling of probability in the midst of the tale–when strung together in a usually quite-long book ultimately tell a vivid story about a person or time.

So, in Ackroyd’s biography of William Shakespeare, an image of the bard is refining in my mind–or Ackroyd’s “bard,” in any case.

One of the open questions for me is how Shakespeare caught his break in the theatre business of London. Ackroyd quotes a well-known story about Shakespeare from an early biography:

“he made his first Acquaintance in the Play-house … in a very mean Rank.”

“A Very Mean Rank” is an image that resonates through the ages, this (literary) rags-to-riches story that we love to tell even now. Shakespeare was on the edge of being wealthy growing up, well-connected, and had received a quality though basic education, so I think we can overread this David & Goliath tale. Many historians and biographers have imagined Shakespeare entering the theatre as “a prompter, a call-boy, a porter or a patcher-up of other men’s plays,” or even a young actor (Ackroyd, Shakespeare, 153).

But there are other roles to be had in the theatre. How many great actresses began as cigarette girls, ushers, and stand-ins, only to find their way to the silver screen? According to Ackroyd, a Shakespeare family member believed that Shakespeare caught his break when he was suddenly holding the horse of a gentleman and the accident itself–no doubt combined with Shakespeare’s personality–lead to the poet’s first patron. Samuel Johnson also tells a similar story, but arguing that a late-teen/early-20s Shakespeare paid his way by working in the livery, holding horses for the wealthy theatre-goers during the plays. Apparently,

his first expedient was to wait at the door of the play-house, and hold the horses of those who had no servants, that they might be ready again after the performance. In this office he became so conspicuous for his care and readiness, that in a short time every man as he alighted called for Will Shakespear (Ackroyd, Shakespeare, 154).

Ackroyd admits that the story seems “too good to be true.” It is certainly the story I would use if I were writing a biopic or fictionalized biography.

However, there is a pretty cool parallel that pops into my mind that makes the improbable more than possible and makes a pretty interesting link to today’s dramatic world.

In this King’s College (London) lecture, Yale scholar David Kastan is arguing, essentially, that it is we who create Shakespeare, that his biography is shaped and reshaped generations after his relatively obscure life because it is we who find him compelling. In Shakespeare’s own generation, as important as his plays were, he would be a relatively hidden figure. Prof. Kastan makes the comparison with a Hollywood film-writer. Unless we are experts or super-fans, we do not know, usually, who “wrote” a film. And when we do, we are usually wrong, Kastan says, because there is an entire team of people who pull together the script. So with Shakespeare, who was essential to his age in terms of literary production, but inessential in terms of the dramatic experience of the audience.

Ackroyd would disagree with much of what Kastan has said. Still, it is the link to Hollywood that makes me think of Brian Grazer. Sometimes on his own, but often with co-writer and co-producer with Ron Howard, Grazer has created some of the most important films and television shows to come from Hollywood. As my little poster montage below shows, there are some stinkers. And the greatest epics of speculative fiction in this generation–the fantasy, SF, and comic-based epics–are not in his field. But Brian Grazer is one of the greatest storytellers of this generation with films and TV shows like Curious George, The Doors, Lie to Me, A Beautiful Mind, Apollo 13, 8 Mile, Splash, The Beatles: Eight Days a Week, 24, Frost/Nixon, and Empire. According to the scrupulous editors of Wikipedia, as the founder of Imagine Entertainment,

“Grazer’s films and TV shows have been nominated for a total of 43 Academy Awards, and 198 Emmys. At the same time, his movies have generated over $15 billion in worldwide theatrical, music, and video grosses.”

True, I don’t think we can say of Brian Grazer that he is a “Shakespeare” in the sense of a once-in-a-lifetime genius that transcends and transforms an entire culture. However, if Prof. Kastan is right, we cannot know who those will be in our age, and Grazer is among the most important visual storytellers we have in our midst. 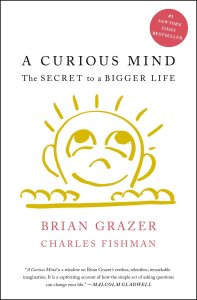 Moreover, he has his own stableboy story worth telling, captured in a couple of interviews and his book, A Curious Mind.

Beyond being a Hollywood producer, Grazer is widely known as someone who can make you tell your story. In the first video below, then Disney CEO Robert Iger interviews Brian Grazer about his “curiosity conversations”–a habit that Grazer developed to have organic, open, and generative conversations with interesting people with the hope of sparking new ideas and new connections. In the second video below, Brian Grazer and Malcolm Gladwell interview each other about books they had coming out in 2015. Grazer’s book, A Curious Mind, includes many of these stories of meeting celebrities, royalty, geniuses, and villains in the search for getting their story.

In these two interviews and the book, Grazier relates how he managed to find himself in Hollywood. He was in law school–despite having been a terrible student with dyslexia–and not looking forward to a legal career. He was in LA, leaning out the window and watching the street and wondering how he could find his way into the film industry. He heard a couple of guys talking on the street below, one of them who was a bicycle messenger for Warner Brothers, delivering contracts and the like between studios. The messenger talked about how his job was great, meeting famous people and working just a few hours and living in the company invisibly for the rest of the time. Seizing the opportunity, Brian Grazer went to Warner Bros. and told them he was the new legal messenger. They never questioned it, and he found that he was the new law clerk of one of Hollywood’s leading firms.

From that point, Grazer took advantage of his position. Instead of just dropping of contacts to be signed, he insisted that he had to see the actor, writer, or director in person to get the signatures. From these meetings, he leveraged time for conversation, where he gained advice and a few connections. At one point, he convinced someone to let him use a top-floor empty office to organize his materials between deliveries–giving him an executive-level office and access to the leading visionaries of Warner Brothers. Eventually, he met Ron Howard and went on to make Nightshift–a crazy romp with a kind of cult following in the ’80s–and then the breakout quirky romcom Splash, with Tom Hanks and Daryl Hannah. Eventually, he went on to receive four Academy Awards, including best picture for A Beautiful Mind, a gorgeous and alluring film. The slate of brilliant stories that Grazer tells of the people he has met is only exceeded by his own success as a filmmaker and TV producer. And now he is also the NY Times bestselling author of A Curious Mind, where he draws into a life of curiosity conversations throughout the world.

I suppose today’s livery boy equivalent would be a parking attendant. But Brian Grazer’s clerk-to-Hollywood bigwig story has interesting parallels with Shakespeare’s. More than anything, it shows me how a particular kind of personal ambition combined with energetic genius can not only create space for good art but also give the genius a chance to leverage opportunities for success. It could be the stable-boy Shakespeare story is too good to be true. As we see in Brian Grazer’s life, however, it is far from impossible.

“A Pilgrim in Narnia” is a blog project in reading and talking about the work of C.S. Lewis, J.R.R. Tolkien, and the worlds they touched. As a "Faith, Fantasy, and Fiction" blog, we cover topics like children’s literature, apologetics and philosophy, myths and mythology, fantasy, theology, cultural critique, art and writing. This blog includes my thoughts as I read through Lewis and Tolkien and reflect on my own life and culture. In this sense, I am a Pilgrim in Narnia--or Middle Earth, or Fairyland. I am often peeking inside of wardrobes, looking for magic bricks in urban alleys, or rooting through yard sale boxes for old rings. If something here captures your imagination, leave a comment, “like” a post, share with your friends, or sign up to receive Narnian Pilgrim posts in your email box. Brenton Dickieson is a father, husband, friend, university lecturer, and freelance writer from Prince Edward Island, Canada. You can follow him on Twitter, @BrentonDana.
View all posts by Brenton Dickieson →
This entry was posted in Thoughtful Essays and tagged 8 Mile, A Beautiful Mind, A Curious Mind, Apollo 13, Brian Grazer, Curious George, Lie to Me, Malcolm Gladwell, Night Shift, Peter Ackroyd, Ron Howard, Samuel Johnson, Shakespeare, Splash, The Beatles, The Doors. Bookmark the permalink.

9 Responses to “A Very Mean Rank”: William Shakespeare, Brian Grazer, and Biographies that are Too Good to be True