Posted on April 8, 2021 by Brenton Dickieson 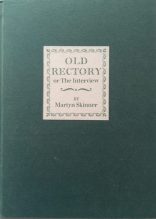 Luke, known as Old Rectory, took up the hermit’s life many years ago, even before the time of the pandemic that sprang from a virologist’s laboratory.  Luke’s nickname refers to his residence near an abandoned church that he uses as a painter’s studio. The deadly Porton Sneeze killed most of the people then alive, and “progress” was held in abeyance.  Now, though, English cities have revived, but, though empty houses may still be shunned for fear of the plague, hermits have settled in “Barns, disused churches, signal-boxes, sheds.”

The journalist Fossick, and his friends Ponder and Baytre, intend to record the seldom-seen painter-recluse, Old Rectory, for a series on such folk.  The hermit psychically senses that they are coming.  He gives them drink…

The recluse and his three visitors settle in at the rectory.  The recluse talks for the tape machine (though he privately regards it as a “product of the second Fall of Man”).  Then, having put the three visitors to sleep, he mentally summons two hermit-friends.  They come and listen to the tape 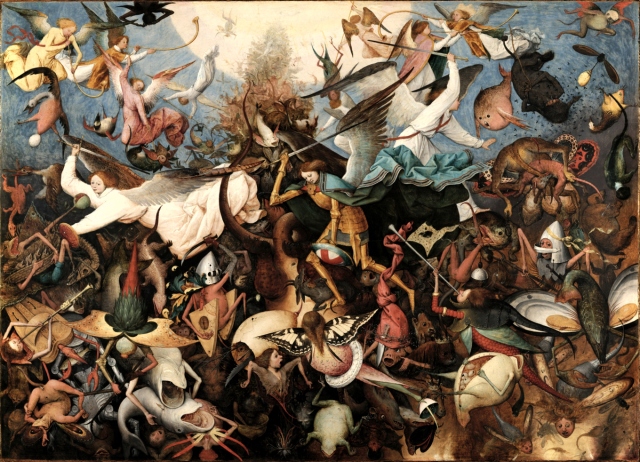 Like 2021’s TV interviewers, the three visitors (at first at least) had hardly let Old Rectory open his mouth before they tumbled out their own ideas.  Fossick’s notion of fantasy versus reality is, Rectory tells his hermit-friends, the opposite of his own.  (I was reminded of Malcolm Muggeridge’s pungent late-life remarks about the pervasive unreality of journalism.)

But eventually Rectory was able to tell how, many years ago, he relocated from suburb to village – “A country lane was my Damascus Road.”  The idyll soon proved false.  It turned out that his neighbors were dull folk absorbed by gadgets and TV, and he was dismayed by their loose and noisy dogs that mobbed the roads.  He moved again. 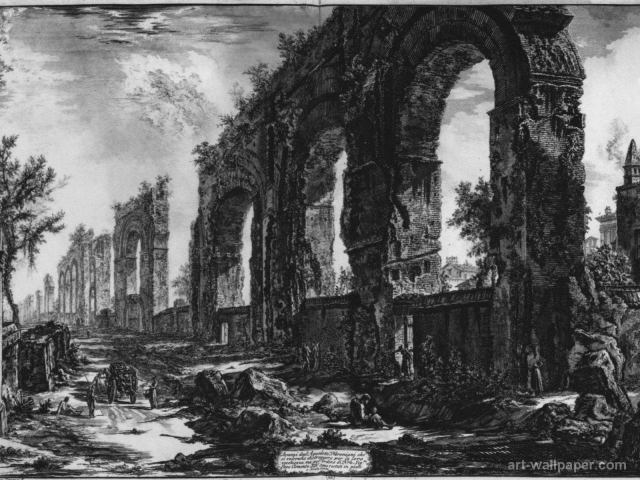 But at that point in the interview, though Rectory had not reached the nub of his argument, Fossick had suggested a halt.  One of the other visitors, the inquisitive J. J. Ponder, wanted to probe the matter of sexual temptation further and the recorder stayed on a little longer.

Old Rectory gave the visitors more to drink and soon they fell asleep.

Having listened to the tape, hermit-friend Dirk Willett grants that Old Rectory laid a foundation, and the recluse says, “It’s our Christian plight; Before re-building we must clear the site.”  Ralph Brompton Ralph, the other hermit visitor, thinks that Rectory may have been at his best when dealing with lesser matters – comparable to marginal manuscript illuminations that charm with decorative mermaids, gems, and peacocks but distract from Bethlehem and Calvary.

Rectory had hoped he could help the interviewers to consider “the verities Of death, redemption, and Apocalypse” and bear such truth into the world.  But he realized they had no interest in metanoia.  He now believes the three hermits themselves need to go forth, for the sake of a new world to be “grounded in redemptive grace.”

The three recluses, joined by their hermit-friend Malachi, visit Rectory’s studio in the abandoned church.  Now we readers see what Rectory has been doing during these many years.  His paintings include works derived from the masters—Breughel’s phantasmagoric Fall of the Rebel Angels, Piranesi’s Aqueduct of Nero with its image of the Cross as two intersecting, living branches growing above the ruins, and Rubens’s Adoration of the Kings. 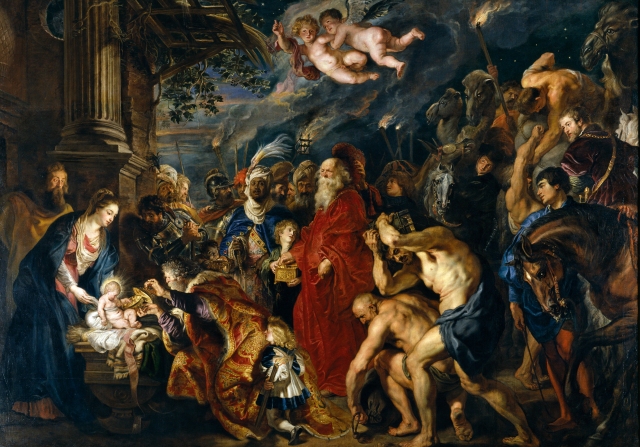 Removed from a world enduring catastrophe, Rectory has followed what Charles Williams called the Way of the Affirmation of Images.  The poem’s allusions and references remind us of great art and books – especially the Book; what a contrast with our present culture of forgetfulness, replacement, and obliteration.  Skinner makes you want to read and view such things more gratefully.

The reveries of the four hermit-friends are interrupted by the clamor of the journalists demanding to be let in for more interviewing.  It’s evident that they represent a great many survivors who have learned little or nothing from mankind’s disaster.  The ailing Malachi volunteers to stay behind while the other three friends slip away.  What the results of their mission will be, they entrust to God. 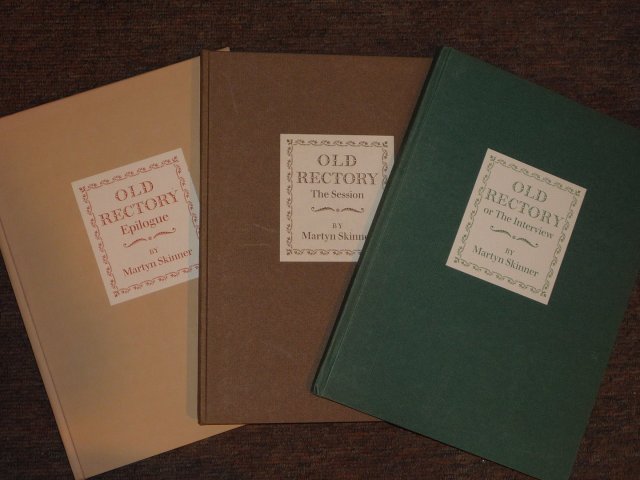 Skinner’s fluent long poem, combining blank verse and rhyme and language-play, was dedicated to his old friends Hugh Waterman and Bede Griffiths, the trio whose real-life “experiment in common life” is described so memorably in Griffiths’ The Golden String (1954).  That was one of the first books with material about C. S. Lewis and the Inklings.

When I read Old Rectory’s praise of candlelight I was reminded of a passage in Griffiths’ book.  Like Griffiths, Skinner was a friend of Lewis; Skinner and Griffiths were in the penumbra of the Inklings.  I’m sure Lewis would have found Old Rectory to be delightful.

In 2018 I wrote about two earlier book-length poems by Skinner (1906-1993) here at Pilgrim in Narnia.  These were The Return of Arthur and Sir Elfadore and Mabyna.  You will find more about Martyn Skinner in those columns. 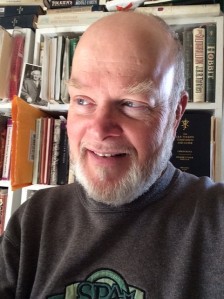 Dale Nelson is a columnist and reviewer for CSL: The Bulletin of the New York C. S. Lewis Society and Beyond Bree, a monthly Tolkienian newsletter.  His work appears in fanzines such as Pierre Comtois’s Fungi, William Breiding’s Portable Storage, and Bob Jennings’s Fadeaway.  He lives in rural North Dakota with his wife and four cats, and is a member of the local Lutheran Church-Missouri Synod congregation.

Skinner’s contemporary Malcolm Muggeridge (1903-1990) was a print and television journalist and editor.  A notorious satirist during much of his career, he was often mocked for his late-life public embrace of Christian faith.  Among his books is Christ and the Media.

“I don’t want to keep abreast of current affairs, and if I did want to, [television is] the last place in the world to look.  What you keep abreast of is not current affairs but a fantasy called ‘ the consensus’ which is presented by various interests.  The idea that people are better informed because of television is to me a most laughable thing.  They’re better informed – but with lies! …the most essential thing for human beings is to have an awareness of their Maker, God, and to see their own lives in time in relation to God and in relation to eternity.  …But in fact, partly through the media, this awareness of God has been enormously eroded and people think increasingly that man can live his life in purely mortal terms.  That he can shape his own destiny.  …the concepts of good and evil on which all law, all morality, and all transcendentalism are based have largely gone.” – Muggeridge in a 1974 interview published in the Berkeley Christian “underground paper” Right On! (May 1975).

In The End of Christendom (addresses given at the University of Waterloo in 1978), Muggeridge said, “A strange thing I have observed over many years in this business of news gathering and news presentation is that by some infallible process media people always manage to miss the most important thing.  …In moments of humility, I realize that if I had been correspondent in the Holy Land at the time of our Lord’s ministry, I should almost certainly have spent my time knocking about with the entourage of Pontius Pilate, finding out what the Sanhedrin was up to, and lurking around Herod’s court with the hope of signing up Salome to write her memoirs exclusively.  I regret that this is true.”

Muggeridge had firsthand experience of the alliance between journalism and fantasy in the early 1930s.  As correspondent in Stalin’s USSR for the Manchester Guardian, he was the first reporter to break the story of the Holodomor, the state-engineered terror famine that killed millions in Ukraine.  (Muggeridge’s reports were followed days afterwards by Gareth Jones, subject of a recent movie.)  The famine story was soon suppressed.  Instead, the infamous New York Times reporter Walter Duranty won the Pulitzer Prize for his (false) account of Russian affairs, denouncing reports of the famine, and, a few years later, defending Stalin’s show trials.

Muggeridge refers to Duranty here (about 7:30):

MALCOLM MUGGERIDGE: “Reflections on Stalin’s regime and THE HOLODOMOR” – YouTube

I wrote about Right On! in the fanzine Portable Storage #3 (the San Francisco Bay Area issue), pp. 82-87.  PS is in no way a Christian publication; but the editor has been remarkably receptive to my work.

“A Pilgrim in Narnia” is a blog project in reading and talking about the work of C.S. Lewis, J.R.R. Tolkien, and the worlds they touched. As a "Faith, Fantasy, and Fiction" blog, we cover topics like children’s literature, apologetics and philosophy, myths and mythology, fantasy, theology, cultural critique, art and writing. This blog includes my thoughts as I read through Lewis and Tolkien and reflect on my own life and culture. In this sense, I am a Pilgrim in Narnia--or Middle Earth, or Fairyland. I am often peeking inside of wardrobes, looking for magic bricks in urban alleys, or rooting through yard sale boxes for old rings. If something here captures your imagination, leave a comment, “like” a post, share with your friends, or sign up to receive Narnian Pilgrim posts in your email box. Brenton Dickieson is a father, husband, friend, university lecturer, and freelance writer from Prince Edward Island, Canada. You can follow him on Twitter, @BrentonDana.
View all posts by Brenton Dickieson →
This entry was posted in Reflections and tagged Bede Griffiths, C.S. Lewis, Charles Williams, COVID-19, Dale Nelson, Inklings, Martyn Skinner, Old Rectory or The Interview, pandemic, The Golden String. Bookmark the permalink.