Posted on September 17, 2021 by Brenton Dickieson

We have heard the rumours for months, fuelled by short news pieces that sounded promising. And now we have it, the teaser trailer of Nightmare Alley, a Guillermo del Toro adaptation with a huge cast, including Bradley Cooper, Cate Blanchett, Willem Dafoe, Rooney Mara, and Mary Steenburgen. 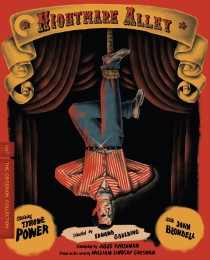 While it is difficult to forgive him for The Hobbit adaptation, Guillermo del Toro is a genius of dark fantasy with Academy Award-winning films like Pan’s Labyrinth (2006) and The Shape of Water (2017). From the teaser, it looks like del Toro wants to languish in the smokey, eye-gazing, overwrought one-line dynamic of the 1947 film noir version of Nightmare Alley, combined with a thriller energy that back-stages atmospheric features of carnival life, both luring and lurid.

Indeed, while the trailer wants us to think that true monstrosity is always off stage–and there are some intriguing nods to the ’47 film even in this short trailer–I have no doubt that del Toro is trying to help us reimagine both terror and monstrosity.

Why the interest in this particular film?

While I am a fan of thrillers that flirt with the fantastic, it is mostly because both the 1947 and 2021 films are adaptations of the 1946 novel of the same name, written by William Lindsay Gresham. That is, Bill Gresham, the husband of Joy Davidman–the enigmatic poet and prose writer who found her way into an unlikely and tender late-in-life marriage with C.S. Lewis. So while Joy Davidman’s life and work–including her compelling poetry and mercurial personality–loom much larger for me than a one-hit-wonder novelist from the ’40s, the connection keeps me intrigued. Davidman’s biographer, Abigail Santamaria, describes Nightmare Alley‘s impact on the Gresham household where both Joy and Bill were struggling writers, pressed to the edge as parents and artists:

Nightmare Alley, published on September 9 [1946] had begun generating press as early as July 7, with the Washington Post promising a “sinister and compelling piece of fiction” that would “shock some readers but send the public clamoring to the bookstores.” And it did. The novel, a work of brilliance, would become a noir classic with a cult following for decades to come.

But first, a bigger payoff presented itself: Twentieth Century-Fox bought the film rights for $50,000. And the studio invited Bill to Hollywood for the first two months of 1947 to collaborate with writer Jules Furthman on adapting the novel for the screen. In January, Bill took a train west. The picture, starring Tyrone Power and dJoan Blondell, would be produced at lightning speed for a New York City premiere at the Mayfair Theater on October 7, 1947. The windfall was more money than Bill or Joy had ever seen, and they knew exactly how they wanted to spend it. “We looked around for the biggest house we could find,” Bill said. After two years of living and writing in a cramped three-room apartment with one, and then two babies, the Greshams wanted a home with land where Davy and Douglas could grow “husky and brown and tough and mischievous. That is all one can ask.” And they “had to have a woodlot,” Joy insisted. “We wanted the feeling of walking in our own woods.” Ample workspace was also a priority, private studies in which to think and write. Both of them had new projects in the works…. The future once again promised great things. Now they could settle down. Now everything would be fine (Abigail Santamaria, Joy: Poet, Seeker, and the Woman Who Captivated C. S. Lewis (p. 178-9).

I have no doubt that Gresham’s Nightmare Alley will find its way to my bedside table this fall as I await the December 3rd release. There will be more to say. Meanwhile, here is the teaser trailer for Guillermo del Toro’s Nightmare Alley.

Someone has created a little trailer for the 1947 film:

And you can find the entire film smouldering 1947 classic here:

“A Pilgrim in Narnia” is a blog project in reading and talking about the work of C.S. Lewis, J.R.R. Tolkien, and the worlds they touched. As a "Faith, Fantasy, and Fiction" blog, we cover topics like children’s literature, apologetics and philosophy, myths and mythology, fantasy, theology, cultural critique, art and writing. This blog includes my thoughts as I read through Lewis and Tolkien and reflect on my own life and culture. In this sense, I am a Pilgrim in Narnia--or Middle Earth, or Fairyland. I am often peeking inside of wardrobes, looking for magic bricks in urban alleys, or rooting through yard sale boxes for old rings. If something here captures your imagination, leave a comment, “like” a post, share with your friends, or sign up to receive Narnian Pilgrim posts in your email box. Brenton Dickieson is a father, husband, friend, university lecturer, and freelance writer from Prince Edward Island, Canada. You can follow him on Twitter, @BrentonDana.
View all posts by Brenton Dickieson →
This entry was posted in Feature Friday, News & Links and tagged Abigail Santamaria, Bradley Cooper, C.S. Lewis, Cate Blanchett, dark fantasy, Guillermo del Toro, Joy Davidman, Mary Steenburgen, Nightmare Alley, Pan's Labyrinth, Rooney Mara, The Shape of Water, Willem Dafoe, William Gresham. Bookmark the permalink.