Lost and Found Writers at the Altars of Hope

Stephen King claims in his writing memoir, On Writing, that he used to collect his rejection letters from publishers on a nail in his attic. When the

weight of the dozens of rejections became too much for the nail, he replaced it with a spike and kept on collecting those letters.

I don’t doubt it. There is something sacred for writers about any correspondence from those gatekeepers of binding and ink, even if it is a tersely worded rejection. Anything I have from the third-rung editors I’ve had contact with—and they’ve been few, since I seem to binge write and then hoard my work in well-named file folders—I tape on a wall in my writing station, a kind of literary shrine of “Congratulations!” letters and hand-written notes. When inspiration is low, I run my finger across the aging paper, tracing the jagged tape ends while my mind tumbles toward new imaginative worlds.

I suspect I’m not the only author-in-waiting who has created a cultic relationship with his acceptance and rejection letters. I’m also quite secretive about the whole experience. True, when I got picked up by The UTNE Reader, I broadcasted it far and wide, but for the most part I simply cut up

the letter and paste it to my wall. Until I am found as a writer, these things remain in my own little world, living somewhere between hope and despair.

So when I read books on writing by those who have wedged open a space for themselves in the publishing world, I’m fascinated by their rituals of acceptance and rejection, like Stephen King’s nail on the attic truss. Reading through C.S. Lewis’ letters, I came across his lost and found experiences as a young poet at the end of WWI. After a mortar wound, his convalescence in hospital gave him the opportunity to edit his poems into a book and then to submit them for publication. Naturally, “almost beyond hope,” Lewis began with the top publishing house, Macmillan & Co., still a powerhouse in the business. His manuscript was promptly rejected with this courteous note:

“Dear Sir,
We duly received your manuscript entitled ‘Spirits in Prison: A cycle of lyrical poems’, by Clive Staples, and regret to say that we do not see our way to undertake its publication. Some of the shorter nature poems seem to us to have no little charm, but we do not feel that the collection as a whole would be likely to appeal to any considerable public. We beg therefore to return the MS. with thanks.
We are, yours faithfully,
Macmillan and Co. Ltd.” (Letter to Arthur Greeves, c. Aug 7, 1918)

Lewis was not overly discouraged and promptly sent the manuscript on to Heinemann, who were known for publishing contemporary poets. Just a month after this first rejection, Lewis was able to write to his good friend with the thrilling news that he had been picked up by Heinemann:

“The best of news! After keeping my MS. for ages Heinemann has actually accepted it. ‘Wm. Heinemann’ – apparently there is a real Mr Heinnemann – writes to say that he ‘will be pleased to become its publisher.’ He adds that it may be well to re-consider the inclusion of some of the pieces ‘which are not perhaps on a level with my best work’.” (c. Sep 12, 1918)

You’ll excuse Lewis for his misspelling of the publisher given his excitement, and for imagining that a 2-3 week manuscript review was “ages,” but this is the beginning of Lewis’ writing career.

What follows over the next few months is a correspondence about the title of the book—which ultimately becomes Spirits in Bondage—Lewis’ pseudonym, 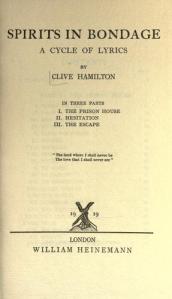 an exchange of poems, some editing, and the descriptions of Lewis’ personal meeting with Mr. Heinemann.

As it turns out, while Lewis was discovered as a poet by William Heinemann, he remained a rather lost literary figure. Spirits in Bondage did not sell well and was reviewed in none of the important places. Not quite a decade later, Lewis finally came to terms with the fact that he would not be a famous author and settled into an academic life. After a decade of struggle and failure, he finally gave up his dream.

The letters he writes to his father and best friend show the vast differences in the publishing business then and now. It’s not surprising, then, that Lewis kept all the letters in his correspondence with Mr. Heinemann, and he even kept that polite note of rejection from Macmillan. It seems that even this prepubescent literary giant had his own version of a nail in the attic, his own literary shrine of lost and found.

“A Pilgrim in Narnia” is a blog project in reading and talking about the work of C.S. Lewis, J.R.R. Tolkien, and the worlds they touched. As a "Faith, Fantasy, and Fiction" blog, we cover topics like children’s literature, apologetics and philosophy, myths and mythology, fantasy, theology, cultural critique, art and writing. This blog includes my thoughts as I read through Lewis and Tolkien and reflect on my own life and culture. In this sense, I am a Pilgrim in Narnia--or Middle Earth, or Fairyland. I am often peeking inside of wardrobes, looking for magic bricks in urban alleys, or rooting through yard sale boxes for old rings. If something here captures your imagination, leave a comment, “like” a post, share with your friends, or sign up to receive Narnian Pilgrim posts in your email box. Brenton Dickieson is a father, husband, friend, university lecturer, and freelance writer from Prince Edward Island, Canada. You can follow him on Twitter, @BrentonDana.
View all posts by Brenton Dickieson →
This entry was posted in Letters, Lewis Biography, Thoughtful Essays and tagged C.S. Lewis, letters, literary shrine, literature, On Writing, rejection letters, Spirits in Bondage, Stephen King, writing. Bookmark the permalink.