A Prophecy After it Happened; Or, How Children Shape the Future

Posted on September 12, 2012 by Brenton Dickieson

While reading The Magician’s Nephew to my son, I blogged a couple of weeks ago about how “What We Believe is What We Become.” I don’t believe it is an absolute rule of human life–all of us change paths from time to time, after all. But with our small everyday choices we really do build into ourselves the kind of people we will become. Our regular decisions become mental tricks, and then habitual patterns, unconscious rituals and, finally, “us” in the deepest sense of our identity. In The Magician’s Nephew we see Uncle Andrew who does his best not to believe that a lion is speaking to him: he becomes quite effective in his disbelief. He closes his eyes and leaves Narnia entirely disconnected from anything that truly happened around him. We see this truth elsewhere, from the Dwarfs of The Last Battle to the Duffledpuds of The Voyage of the Dawn Treader to

As we close The Magician’s Nephew, however, we see the principle in reverse. Aslan, the great lion who sings Narnia into creation, speaks to our heroes, the children Polly and Digory, as they head back to their dimension. In the Woods Between the Worlds, Aslan points to the symbol of a world that has died–it ended in war, and the final spell of a desperate magician. The witch Jadis–we know her as the White Witch in The Lion, the Witch, and the Wardrobe–has learned the Deplorable Word, that one word that can kill the entire world. Aslan leaves the children with a warning for their own world:

“That world is ended as if it had never been. Let the race of Adam and Eve take warning.”
“Yes, Aslan,” said both the children. But Polly added, “But we’re not quite as bad as that world, are we, Aslan?”
“Not yet, Daughter of Eve,” he said. “Not yet. But you are growing more like it. It is not certain that some wicked one of your race will not find out a secret as evil as the Deplorable Word and use it to destroy all living things. And soon, very soon, before you are an old man and an old woman, great nations in your world will be ruled by tyrants who care no more for joy and justice and mercy than the Empress Jadis. Let your world beware. That is the warning.”

Written between 1949 and 1954 by someone who was injured in World War I, who wrote a book about tyranny (That Hideous Strength), and who created a Hitler-inspired

demonic character (Screwtape), the reference seems obvious. The tyrants that the children–born in 1890s–will face are recognized in history. In the Western world we would quickly name Benito Mussolini, Adolf Hitler, and Emperor Hirohito. They were certainly tyrants, though not the most murderous of the century. The prophecy of tyranny is left ringing in the children’s ears as Aslan speaks of tyrants who care not for joy–it is Jadis who destroys the seasons of “jollification” in The Lion, the Witch, and the Wardrobe. And any tyrant will ignore the warning of the prophet that haunts behind this passage:

He has shown you, O mortal, what is good.
And what does the Lord require of you?
To act justly and to love mercy
and to walk humbly with your God (Micah 6:8).

The warning doesn’t just include tyranny, but also includes the Deplorable Word. It is hard for me to imagine that Lewis doesn’t have in mind the nuclear bomb. On August 6, 1945, humanity woke up to the realization that we now had the capability of destroying the entire planet. The hubris of heroes and tyrants now looked pale compared with the

actions of one of these heroes: a package was dropped from the heavens and an entire city disappeared. Scientists had discovered the Deplorable Word, and international politics has been defined since by our ability to speak that Word.

But, as readers, we cannot help but thinking: what are Digory and Polly to do? I mean, really, what can children do about tyrants that aren’t even born yet? As far as we know, neither Polly nor Digory become great ones who can serve as international superpowers to counter great evil or shepherd those who have discovered the Deplorable Word. Digory does commission a wooden closet that becomes important, but he is a professor who retires in quietude. Neither attend the courts of Hitler, Churchill, or Truman.

I think, though, that the prophecy is not simply Lewis looking back on WWII, but looking forward into the “end of history”–the liberal democratic age in which we live. The spilled blood of the 20th century did not end with the bombing of Hiroshima and Nagasaki, but continued through ideological wars, proxy wars, colonial rebellions, and cold war, finishing the century in Manhattan on 9/11. Our 20th century was the one that invented the word “genocide,” after all.

And more than that, the idea of tyranny has become more complex, hasn’t it? We now know that each of us as individuals are intricately linked with all others in a global economic, social, political, and environmental web. It is a moral link, I believe. 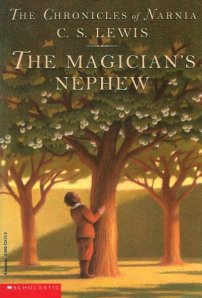 It means that tyrants are not always the Other, the great Enemy. Our great Western governments may be tyrannical in how we “spread democracy,” and we as individuals may be tyrants in how we eat oranges or buy shoes or write blogs. After all, 250 years after Voltaire, we still sweeten our tea with the blood of slaves.

I think that C.S. Lewis, with this after-the-fact prophetic warning, is speaking to readers. He is speaking to the children of today. He had every confidence that we become what we believe. Lewis believed that children have the ability to create a future that moves past tyranny in all its forms–perhaps only children have that power to intentionally create themselves into the kind of people who can resist tyrants. While Uncle Andrew serves as the man who closes his eyes–quite literally, especially when he is mistaken for a vegetable and planted by a well-meaning elephant–to the complex world around him, Lewis betrays the belief that children can grasp that world. And, I believe, in grasping that world, he intended them to transform it. It is children who shape the future.

“A Pilgrim in Narnia” is a blog project in reading and talking about the work of C.S. Lewis, J.R.R. Tolkien, and the worlds they touched. As a "Faith, Fantasy, and Fiction" blog, we cover topics like children’s literature, apologetics and philosophy, myths and mythology, fantasy, theology, cultural critique, art and writing. This blog includes my thoughts as I read through Lewis and Tolkien and reflect on my own life and culture. In this sense, I am a Pilgrim in Narnia--or Middle Earth, or Fairyland. I am often peeking inside of wardrobes, looking for magic bricks in urban alleys, or rooting through yard sale boxes for old rings. If something here captures your imagination, leave a comment, “like” a post, share with your friends, or sign up to receive Narnian Pilgrim posts in your email box. Brenton Dickieson is a father, husband, friend, university lecturer, and freelance writer from Prince Edward Island, Canada. You can follow him on Twitter, @BrentonDana.
View all posts by Brenton Dickieson →
This entry was posted in Memorable Quotes, Reflections and tagged C.S. Lewis, children's literature, Dufflepud, Hitler, Jadis, lion the witch and the wardrobe, nuclear bomb, science, Screwtape, The Last Battle, The Lion, the Witch, Voyage of the Dawn Treader, war. Bookmark the permalink.

5 Responses to A Prophecy After it Happened; Or, How Children Shape the Future