The Inside is Bigger than the Outside: A Christmas Thought from Narnia for Our World Too

Posted on December 25, 2012 by Brenton Dickieson

“Always winter and never Christmas.” This is the condition where we first discover Narnia in The Lion, the Witch, and The Wardrobe. It is not so much blanketed in white as smothered in it, frozen by it. Anyone in my part of the world will immediately know that this is a curse: all those dreary winter nights, locked indoors to escape from the bone-chilling cold, the sun squeezing through a frozen sky only a few hours a day. In winter I yearn for light. To never experience Christmas, where all of eternity tilts towards the sun and light grows once again–to me that would be a great curse.

The turning of the solstice and the coming for Christmas, for me, is really the birth of spring. Christmas is the first day of the Easter season. Most of the winter lays ahead, yet I somehow have the resources to face it. The curse is broken, I think. Likewise, the strange, almost incongruous coming of Father Christmas* into the Narnian Woods signals the breaking of Narnia’s long winter, the beginning of the end of the curse. And the coming of that Narnian Christmas, too is also the beginning of Narnian Easter.

But do not think there is a one-to-one relationship between our world and the world of Narnia. C.S. Lewis’ Chronicles are not allegories like John Bunyan’s Pilgrim’s Progress or George Orwell’s Animal Farm. Aslan is not Christ, precisely; neither is Edmund the biblical Adam nor the White Witch the historical Satan. Narnia is a different world altogether. Unlike our great great grand-humans, Adam and Eve, the first Narnians did not flee from Eden. Christ is not Aslan, per se, because what is broken in our universe is not the same thing that is broken in the Narnian universe. The Deep Magic is different in each cosmos. It would be more

accurate to say that Aslan is what God would be like wrapped in Narnian flesh. And Edmund is much more like me than Adam or Eve–if one might substitute chocolate peanut butter balls for Turkish Delight as the shadow temptation of a deeper concern.

But as the appearance of Father Christmas in the first Narnian chronicle seems to blur the lines between the worlds (there is no Aslan birth narrative, after all), so there is a place in the last chronicle where the worlds seem to meet.

After the last great battle for Narnia, with the kings and queens and faithful servants of Narnia pressed to the wall against foreign invaders and Narnian traitors, those loyal to the last king of Narnia, Tirian, are forced into a small stable at the top of a hill. At the beginning of the story the stable housed an unwitting Aslanic imposter, and now houses the terrifying

god Tash, summoned by unwitting invaders paying lip service to their own god. As they are forced into the stable, they do not meet the grotesque Tash in the darkness of the barn. Instead, they find that it is another world. Unlike most of the other of Narnia’s royalty, King Tirian has never traveled between words. So he peaks back through the stable door to see the fading fire beside the stable, Narnia on its last evening.

Tirian looked round again and could hardly believe his eyes. There was the blue sky overhead, and grassy country spreading as far as he could see in every direction, and his new friends all round him laughing.
“It seems, then,” said Tirian, smiling himself, “that the stable seen from within and the stable seen from without are two different places.”
“Yes,” said the Lord Digory. “Its inside is bigger than its outside.”
“Yes,” said Queen Lucy. “In our world too, a stable once had something inside it that was bigger than our whole world.” It was the first time she had spoken, and from the thrill in her voice, Tirian now knew why. She was drinking everything in even more deeply than the others. She had been too happy to speak (102-103).

Tirian discovers that the stable is a place where “its inside is bigger than its outside.” Then Lucy, in a spell of wonder, notes that this pattern has been seen once before–and in a stable, no less. In doing so, C.S. Lewis makes a rare break of the overt Christian story into Narnia. My son, who has sat with me as we’ve read all but the last chapter of the 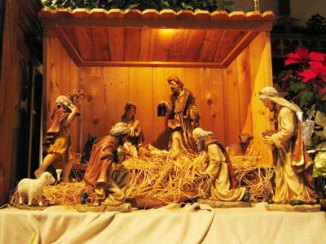 Chronicles, said, “He is putting Christianity in here.” And when he reads them again he will see that Lewis has put “Christianity in” all throughout the Chronicles.

Lucy’s point about Christmas, though, is a profound one. Have you considered what was contained in that little stable these many centuries ago? Many puzzle about the miracle of parthenogenesis that is Christ’s virgin birth. But granted there is a God who hold all the molecules of the universe together, that little moment is hardly so stunning. Indeed all the universe with its infinite leagues of mass tumbling away from long ago was brought into being by a word. A virgin birth is a mere thing.

But think about the physics of containment in that little stable, for a moment. This God, who is certainly bigger than all creation, was wrapped in human flesh and began converting H2O into CO2 in the musty dank of a distant barn. And that child’s first breath prefigured his last, when all the moments of eternity would once again collapse on a single place and time. It is why

Christmas is the beginning of Easter: they are the breaking of Adam’s curse by the Deep Magic of our universe.

How did the walls of that stable not burst oh so many years ago? It is the last turn of the season, so that we will one day find our way back to Eden, where it is always Christmas and never winter.

*For an explanation of why Father Christmas appears in Narnia, see Michael Ward, Planet Narnia, ch. 3.

“A Pilgrim in Narnia” is a blog project in reading and talking about the work of C.S. Lewis, J.R.R. Tolkien, and the worlds they touched. As a "Faith, Fantasy, and Fiction" blog, we cover topics like children’s literature, apologetics and philosophy, myths and mythology, fantasy, theology, cultural critique, art and writing. This blog includes my thoughts as I read through Lewis and Tolkien and reflect on my own life and culture. In this sense, I am a Pilgrim in Narnia--or Middle Earth, or Fairyland. I am often peeking inside of wardrobes, looking for magic bricks in urban alleys, or rooting through yard sale boxes for old rings. If something here captures your imagination, leave a comment, “like” a post, share with your friends, or sign up to receive Narnian Pilgrim posts in your email box. Brenton Dickieson is a father, husband, friend, university lecturer, and freelance writer from Prince Edward Island, Canada. You can follow him on Twitter, @BrentonDana.
View all posts by Brenton Dickieson →
This entry was posted in Reflections and tagged Aslan, Bible, books, chocolate peanut butter balls, Christmas, God in Flesh, lion the witch and the wardrobe, literature, myth, Narnia, The Last Battle. Bookmark the permalink.

14 Responses to The Inside is Bigger than the Outside: A Christmas Thought from Narnia for Our World Too