Meeting the Oddest Inkling: The Early Letters of C.S. Lewis and Charles Williams

I have been reading the newly minted blog, The Oddest Inkling, by American Charles Williams scholar and past Pilgrim guest blogger Sørina Higgins. As I’ve been following the first few posts, I’ve also been reading through C.S. Lewis’ letters, and I came across the first letters Lewis and Williams wrote to one another. Sørina tells the story in more detail in this week’s blog, but because the importance of this encounter in C.S. Lewis’ formation, I thought it was worth posting these letters. They are fan letters, really. Lewis tentatively writes the unknown author of The Place of the Lion (1931) at the same time that Williams is drafting a glowing letter concerning Lewis’ The Allegory of Love (1936).

A book sometimes crosses ones path which is so like the sound of ones native language in a strange country that it feels almost uncivil not to wave some kind of flag in answer. 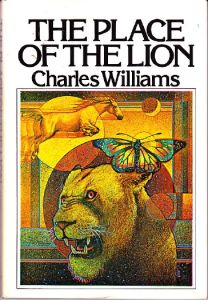 I have just read your Place of the Lion and it is to me one of the major literary events of my life–comparable to my first discovery of George Macdonald, G. K. Chesterton, or Wm. Morris. There are layers and layers–first the pleasure that any good fantasy gives me: then, what is rarely (tho’ not so very rarely) combined with this, the pleasure of a real philosophical and theological stimulus: thirdly, characters: fourthly, what I neither expected nor desired, substantial edification.

I mean the latter with perfect seriousness. I know Damaris very well: in fact I was in course of becoming Damaris (but you have pulled me up). That pterodactyl…I know all about him: and wanting not Peace, but (faugh!) ‘peace for my work’. Not only is your diagnosis good: but the very way in which you force one to look at the matter is itself the beginning of a cure. Honestly, I didn’t think there was anyone now alive in England who could do it.

Coghill of Exeter put me on to the book: I have put on Tolkien (the Professor of Anglo Saxon and a papist) and my brother. So there are three dons and one soldier all buzzing with excited admiration. We have a sort of informal club called the Inklings: the qualifications (as they have informally evolved) are a tendency to write, and Christianity. Can you come down some day next term (preferably not Sat. or Sunday), spend the night as my guest in College, eat with us at a chop house, and talk with us till the small hours. Meantime, a thousand thanks.

The very next day–mail moved quicker back then, in the days before efficiency–Williams wrote back to Lewis from Oxford University Press. He had just finished reading Allegorical Love Poem–what becomes The Allegory of Love in printing–and wanted to send a note of admiration.

If you had delayed writing another 24 hours our letters would have crossed. It has never before happened to me to be admiring an author of a book while he at the same time was admiring me. My admiration for the staff work of the Omnipotence rises every day.

To be exact, I finished on Saturday looking–too hastily–at proofs of your Allegorical Love Poem. I had been asked to write something about it for travellers and booksellers and people so I read it first…I admit that I fell for the Allegorical Love Poem so heavily because it is an aspect of the subject with which my mind has always been playing; indeed I once wrote a little book called An Essay in Romantic Theology, which the Bishop of Oxford (between ourselves) shook his head over. So Amen House did not publish it, and I quite agree now that it was a good thing. For it was very young and rhetorical. But I still toy with the notion of doing something on the subject, and I regard your book as practically the only one that I have ever come across, since Dante, that shows the slightest understanding of what this very peculiar identity of love and religion means. I know there is Coventry Patmore, but he rather left the identity to be deduced.

After vacillating a good deal I permit myself to believe in your letter and in the interests of the subject so far as to send you a copy of one of my early books of verse,18 because the Poems from page 42–page 81 may interest you….

You must be in London sometimes. Do let me know and come and have lunch or dinner…I should like very much to come to Oxford as you suggest; the only thing is that I am a little uncertain about next term because I may be at Canterbury off and on to see the rehearsals of the Play I have written for the Friends of the Cathedral to do in June…You will conceive Cranmer as coming under a similar danger to that from which Damaris was saved by the Mercy. Do forgive this too long letter, but after all to write about your Love Poem and my Lion and both our Romantic Theology in one letter takes some paragraphs…
P.S.2. And I am 49–so you can decide whether that is too old or too young.

This pair of letters began a theological debate (see Sørina’s comments in her blog) and a long-lasting friendship. It was a pivotal moment in C.S. Lewis’ life.

The letters we have were typed up by Williams and so we have lost the original signatures. See Walter Hooper, ed., The Collected Letters of C.S. Lewis, vol 2., 183-5.

“A Pilgrim in Narnia” is a blog project in reading and talking about the work of C.S. Lewis, J.R.R. Tolkien, and the worlds they touched. As a "Faith, Fantasy, and Fiction" blog, we cover topics like children’s literature, apologetics and philosophy, myths and mythology, fantasy, theology, cultural critique, art and writing. This blog includes my thoughts as I read through Lewis and Tolkien and reflect on my own life and culture. In this sense, I am a Pilgrim in Narnia--or Middle Earth, or Fairyland. I am often peeking inside of wardrobes, looking for magic bricks in urban alleys, or rooting through yard sale boxes for old rings. If something here captures your imagination, leave a comment, “like” a post, share with your friends, or sign up to receive Narnian Pilgrim posts in your email box. Brenton Dickieson is a father, husband, friend, university lecturer, and freelance writer from Prince Edward Island, Canada. You can follow him on Twitter, @BrentonDana.
View all posts by Brenton Dickieson →
This entry was posted in Letters, Lewis Biography, Memorable Quotes and tagged books, C.S. Lewis, Charles Williams, Collected Letters of C.S. Lewis, friendship, g k chesterton, George MacDonald, Inklings, J.R.R. Tolkien, letters, literary friendship, The Place of the Lion. Bookmark the permalink.

39 Responses to Meeting the Oddest Inkling: The Early Letters of C.S. Lewis and Charles Williams