A Preview of my 2013 Three Day Novel Contest Story

Once again I am getting ready for the 3 Day Novel Contest. I’ve reblogged my thoughts on the contest from last year (see below), and as I reread what I wrote, I’m a little surprised that I am going in for a fifth 3DNC. I wrote that,

“Most of the winners write tight, almost cryptic first-person narratives, often filled with brooding characters that walk the line between self-hatred and self-discovery.”

I have never written that way, so why do I keep trying?

Moreover, last year’s novel was incredibly difficult to write. The characters haunted me for weeks after I wrote them down, and I ignored the novel all year. It wasn’t until a couple of weeks ago that I could finally read through my 2012 piece again. 3DNC 2012 was a challenge I could not have anticipated.

But, here I am again. This year I have a dark 1st person narrative, so I’m a little closer to the 3DNC genre. But, once again, I’m not aiming to win. Each year that I have done the 72 Hour Novel weekend, I have done it because I have a story idea that is worth writing. So, once again, I will kiss my family goodbye, lock myself in the basement, hook myself up to a caffeine drip, and hammer away at this keyboard. 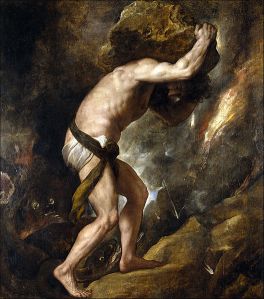 The truth is that I love it. I love pouring out the ideas and editing under incredible pressure. I love jumping at the ideas as they come into my head, and then following that trail knowing that it could lead to destruction and failure. If the 3 Day Novel Contest is a literary marathon, I love to run.

And I am particularly excited about this year’s novel idea with the working title, A Myth of Sisyphus.

It is the story of a young struggling journalist, Jonas, who tumbles into a dingy bar, succumbing to a writer’s cliche but desperate for ideas. What he finds is a man who calls himself Ishmael, who is, at least, willing to buy Jonas a beer. Jonas soon discovers that Ishmael is able to give people the greatest desire of their heart–and he does so, one wish granted each day. The wish is not unlimited. It must be the person’s singularly greatest heart-desire, the one wish that hides secretly within. The wish, a skeptical Jonas discovers as he begins interviewing people who have met Ishmael, really does come true, and each year Ishmael is visited on the anniversary date of the original wish by those he’s gifted.

What happens when your greatest wish is granted, when all your heart’s desire is fulfilled in a single day, when your life is defined by what you want most at a particular moment in time? Jonas is surprised by what he finds, and intrigued by the man Ishmael himself. Given what becomes of the people Ishmael meets, why does he return to the dark bar each day, repeating the story over and over again? As Jonas tries to find out, and gathers the stories of the people Ishmael has touched, the question remains open for him. Will Jonas accept Ishmael’s offer? Will he find the short path through to all he’s ever wanted?

Dayshift Werewolves and Weekend Writers: A Review of the 3 Day Novel Contest Genre (2012)

A slowly leaked secret of my life is that I am a 3 Day Novel Contest survivor. For those who don’t know, the 3DNC is a kind of literary boot camp, “the world’s most notorious literary marathon,” where, each year for the last thirty-five,

hundreds of writers across the world chain themselves to their laptops and typewriters in order to hammer out a 100-page novel in a single weekend. And for each of the last three years I’ve retreated to my writing shrine in my basement during the Labour Day weekend and tried to close a narrative arc in 72 hours. I’ve been successful in finishing a novel each year, though I’ve never cracked that magical list of honourable mentions, those intrepid writers who scrape their way to the top of the literary slag pile

Those who have read some of the 3DNC winners know that there is a kind of genre to the contest. Most of the winners write tight, almost cryptic

There are other great examples. In the Garden of Men by John Kupferschmidt (2007) is a beautifully crafted journal of political impotence

in the face of totalitarian control. From the sterile station of his office cubicle, the protagonist rebels in a futile attempt at a paper-trail revolution. Although he is ultimately unable to save humanity, he himself becomes human in this almost accidental and completely haphazard rebellion. Without the same kind of redemption, The Convictions of Leonard McKinley is Brendan McLeod’s addictive 2006 novel about a young boy’s fixation on appeasing God. Leonard’s perversion, though, is not his complex battle with actual sexual temptation, but the mutilating, spiritually twisted self-loathing that emerges out of his guilt toward a hybridized quasi-

Christian god. It is a disturbing and gripping comedy.

As I sketch out my 3DNC outline each spring, I promise myself I will try to write something that fits within the contest genre. I would like to win, after all, and collect all those royalties that mount into the dozens of dollars. In 2009 I wrote something that might fit the genre, but it was too close, too personal, and at 150 pages, far too brief for real character development. In 2011 I wrote something that is completely un-publishable—a fun idea I wanted to work through, but I knew had no market. I was certain I would not win, but the 3DNC was a great way to get the idea on paper. And in 2010 I typed out a young adult novel that is now in the editing phase with the goal of offering it for publication. This light, colourful preteen girl novel isn’t exactly 3DNC standard fare.

But I picked up a winning book recently that has made me appreciate that there is some breadth in the 3DNC genre. Dayshift Werewolf is a fantasy novel that shows the underbelly of the fairy world. Underwood’s strength is her character exploration. Dayshift Werewolf has a zombie fighting to understand her teenage son who clearly doesn’t get zombiism, an overly-sensitive Norwegian mountain gnome trying to defect to the American wild, a cat-collecting 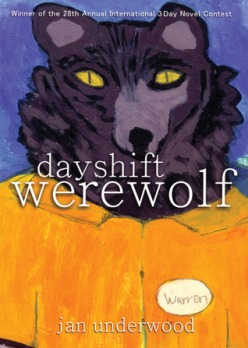 witch manipulated by everyone around her, and a werewolf who prefers gardening to hunting man-flesh. Whether it is a demon bored with the satanic rat race, a monster trying to find his poetic voice, or a teenage Sasquatch struggling to understand why her body isn’t magazine-beautiful, Underwood captures our generation’s neuroses in the comedic confessions of illicit characters.

Even though Underwood’s speculative fiction stretches the 3DNC genre a bit, it still shares some elements with the other books I’ve read. The characters each tell their story in the first person—these are diary entries, the complex mental journeys of the characters. This book is funny, and while it isn’t as dark and tragic as the others, it does have a sweet sadness about it. Dayshift Werewolf is also, in a very real sense, loser lit, the stories of the underdog—or underwerewolf, if such a cliché exists in Underwood’s parallel world. I have experimented with writing the underdog story in the fantasy form, and relish the freedom that Underwood takes advantage of in telling her character’s stories.

One stark difference between Underwood’s book and the other 3DNC winners is that Dayshift Werewolf isn’t really a novel. There is no beginning, middle, and end. Instead, the characters are all connected by

this one town, Stevens’ Ferry, a literal breeding ground of the undead and the weirdly magical, an isolated hamlet with progressive inclusive communities for the naturally grotesque and fantastically degenerate. When I say it isn’t a novel, I don’t mean that the volunteer 3DNC judges picked poorly. Dayshift Werewolf is a great choice, an entertaining and intelligent read. But it fits on the very edges of the novel genre, much like Vincent Lam’s Bloodletting & Miraculous Cures, a haunting collection of stories drawn together around nominally connected characters. They both read like novels, but are really six degrees of separation story collections. This feature makes Underwood’s work unique among 3DNC champions. 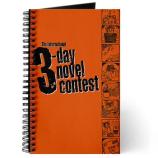 character sketching. My hope is that it will be connected enough to the 3DNC family of books to be considered, and well written enough to be judged on its own merits. Mostly, though, 3DNC is an opportunity to stretch my literary legs, to test out ideas, tease out characters, and actually finish something in a vocation where stories can sometimes go on forever.

“A Pilgrim in Narnia” is a blog project in reading and talking about the work of C.S. Lewis, J.R.R. Tolkien, and the worlds they touched. As a "Faith, Fantasy, and Fiction" blog, we cover topics like children’s literature, apologetics and philosophy, myths and mythology, fantasy, theology, cultural critique, art and writing. This blog includes my thoughts as I read through Lewis and Tolkien and reflect on my own life and culture. In this sense, I am a Pilgrim in Narnia--or Middle Earth, or Fairyland. I am often peeking inside of wardrobes, looking for magic bricks in urban alleys, or rooting through yard sale boxes for old rings. If something here captures your imagination, leave a comment, “like” a post, share with your friends, or sign up to receive Narnian Pilgrim posts in your email box. Brenton Dickieson is a father, husband, friend, university lecturer, and freelance writer from Prince Edward Island, Canada. You can follow him on Twitter, @BrentonDana.
View all posts by Brenton Dickieson →
This entry was posted in Creative Writing, Reviews and tagged 3 Day Novel Contest, 3DNC, Dayshift Werewolf, fantasy, literature, loser lit, myth of sisyphus, writing. Bookmark the permalink.