Let Folly Be Our Cloak: Tolkien on Power in Lord of the Rings

Posted on September 17, 2013 by Brenton Dickieson 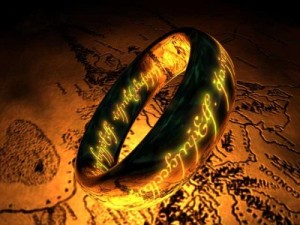 While J.R.R. Tolkien did not write moralistic fantasies or allegorical tales, still the force of his worldview emerges in his writing. He wrote the Lord of the Rings over the fifteen year period through World War II and into the early ’50s. He had fought in WWI, and lectured through the years of Europe’s great shifts of power. While many have traveled on broken trails trying to make the Ring–Bilbo‘s ring, Gollum‘s ring, Sauron’s ring–symbolic of Hitler‘s ideology or the nuclear bomb or original sin, it is certainly a Ring of Power. Its power collapses weak men in itself, causes strong men to stumble and wizards to fail, binds kings past all flesh, and even weaves its way into the souls of hobbits. The quiet observation of Boromir, a hero of Gondor, captures the brilliance of the Ring as an image of power.

“Ah! The Ring! ‘ said Boromir, his eyes lighting. ”The Ring! Is it not a strange fate that we should suffer so much fear and doubt for so small a thing? So small a thing! And I have seen it only for an instant in the House of Elrond. Could I not have a sight of it again?”

So small a thing, power is.

Boromir had tried before to convince the heroes and free leaders of Middle Earth to use the ring of power rather than to dispossess themselves of it. There is more tension in the Peter Jackson film adaptation of The Fellowship of the Ring than the original book. It is worth seeing that Boromir’s desire is genuine, and that he trusts the choice of the council of Elrond.

“I do not understand all this,” [Boromir] said. “Saruman is a traitor, but did he not have a glimpse of wisdom? Why do you speak ever of hiding and destroying? Why should we not think that the Great Ring has come into our hands to serve us in the very hour of need? Wielding it the Free Lords of the Free may surely defeat the Enemy. That is what he most fears, I deem.
“The Men of Gondor are valiant, and they will never submit; but they may be beaten down. Valour needs first strength, and then a weapon. Let the Ring be your weapon, if it has such power as you say. Take it and go forth to victory!”
“Alas, no,” said Elrond. “We cannot use the Ruling Ring. That we now know too well. It belongs to Sauron and was made by him alone, and is altogether evil. Its strength, Boromir, is too great for anyone to wield at will, save only those who have already a great power of their own. But for them it holds an even deadlier peril. The very desire of it corrupts the heart. Consider Saruman. If any of the Wise should with this Ring overthrow the Lord of Mordor, using his own arts, he would then set himself on Sauron’s throne, and yet another Dark Lord would appear. And that is another reason why the Ring should be destroyed: as long as it is in the world it will be a danger even to the Wise. For nothing is evil in the beginning. Even Sauron was not so. I fear to take the Ring to hide it. I will not take the Ring to wield it.”“Nor I,” said Gandalf.
Boromir looked at them doubtfully, but he bowed his head. “So be it,” he said. “Then in Gondor we must trust to such weapons as we have. And at the least, while the Wise ones guard this Ring, we will fight on. Mayhap the Sword-that-was-Broken may still stem the tide – if the hand that wields it has inherited not an heirloom only, but the sinews of the Kings of Men.”
“Who can tell?” said Aragorn. “But we will put it to the test one day.”
“May the day not be too long delayed,” said Boromir. “For though I do not ask for aid, we need it. It would comfort us to know that others fought also with all the means that they have.”
“Then be comforted,” said Elrond. “For there are other powers and realms that you know not, and they are hidden from you. Anduin the Great flows past many shores, ere it comes to Argonath and the Gates of Gondor.”…
“But what then would happen, if the Ruling Ring were destroyed as you counsel?” asked Glóin.
“We know not for certain,” answered Elrond sadly. “Some hope that the Three Rings, which Sauron has never touched, would then become free, and their rulers might heal the hurts of the world that he has wrought. But maybe when the One has gone, the Three will fail, and many fair things will fade and be forgotten. That is my belief.”
“Yet all the Elves are willing to endure this chance,” said Glorfindel “if by it the power of Sauron may be broken, and the fear of his dominion be taken away for ever.”
“Thus we return once more to the destroying of the Ring,” said Erestor, “and yet we come no nearer. What strength have we for the finding of the Fire in which it was made? That is the path of despair. Of folly I would say, if the long wisdom of Elrond did not forbid me.”
“Despair, or folly?” said Gandalf. “It is not despair, for despair is only for those who see the end beyond all doubt. We do not. It is wisdom to recognize necessity, when all other courses have been weighed, though as folly it may appear to those who cling to false hope. Well, let folly be our cloak, a veil before the eyes of the Enemy! For he is very wise, and weighs all things to a nicety in the scales of his malice. But the only measure that he knows is desire, desire for power; and so he judges all hearts. Into his heart the thought will not enter that any will refuse it, that having the Ring we may seek to destroy it. If we seek this, we shall put him out of reckoning.”
“At least for a while,” said Elrond. “The road must be trod, but it will be very hard. And neither strength nor wisdom will carry us far upon it. This quest may be attempted by the weak with as much hope as the strong. Yet such is oft the course of deeds that move the wheels of the world: small hands do them because they must, while the eyes of the great are elsewhere.” 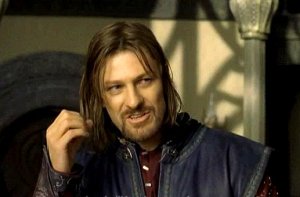 The brilliance of Tolkien’s work is the upside-down nature of the shepherding of power. It is true that there is a place for great heroes and valiant fighters in the battle against the enemy. But the great weakness of evil is its greatness, its desire for and use of power. Sauron, the lord of this “altogether evil” Ring of Power, cannot imagine that anyone would divest themselves of power once they had it. Indeed, the great hero Boromir falls to it.

But, in Tolkien’s mythology, the weak become strong, the last become first, and the least heroic of Middle Earth, hobbits, will “rule the fate of many.” It is only the weak in the ways of power that can negotiate power when it is given to them. To all others, destruction lies on the path ahead.

“A Pilgrim in Narnia” is a blog project in reading and talking about the work of C.S. Lewis, J.R.R. Tolkien, and the worlds they touched. As a "Faith, Fantasy, and Fiction" blog, we cover topics like children’s literature, apologetics and philosophy, myths and mythology, fantasy, theology, cultural critique, art and writing. This blog includes my thoughts as I read through Lewis and Tolkien and reflect on my own life and culture. In this sense, I am a Pilgrim in Narnia--or Middle Earth, or Fairyland. I am often peeking inside of wardrobes, looking for magic bricks in urban alleys, or rooting through yard sale boxes for old rings. If something here captures your imagination, leave a comment, “like” a post, share with your friends, or sign up to receive Narnian Pilgrim posts in your email box. Brenton Dickieson is a father, husband, friend, university lecturer, and freelance writer from Prince Edward Island, Canada. You can follow him on Twitter, @BrentonDana.
View all posts by Brenton Dickieson →
This entry was posted in Memorable Quotes, Reflections and tagged allegory, Bilbo Baggins, fantasy, Hitler, Lord of the Rings, Middle Earth, nuclear bomb, original sin, Peter Jackson, philosophy, power, The Fellowship of the Ring, The Lord of the Rings. Bookmark the permalink.

36 Responses to Let Folly Be Our Cloak: Tolkien on Power in Lord of the Rings