Yours, Jack… or C.S. Lewis… or Clive… or Brother Ass: The Many Signature of C.S. Lewis

For some time, my son has been carefully working on his signature, as I worked on mine growing up. Through sheer laziness, and lacking any artistry or loveliness, my signature is now a “B” with a line blurring to the right. It is nothing if not efficient, and my email signatures migrate from the formal “Sincerely, Brenton Dickieson,” to “Cheers, Brenton” when we know each other well. If we are friends, it will probably become, “Cheers, b.”

Because of the Signature Classic release of C.S. Lewis’ books, his signature has become relatively famous. Of his multiple thousands of letters, he mostly signed:

My first introduction to Lewis’ letters was the little book edited by Clyde S. Kilby, Letters to An American Lady. The “American Lady” initially wrote to Lewis in 1950 for advice on her poetry. Their literary relationship grew, and he eventually found some way for his foundation to support her in difficult times—both in his Christian encouragement and financially.

Some think she was an irksome complainer who dominated Lewis’ time and tried his patience. It is true that she unloads a lot of her problems onto Lewis, and he had come to detest the burden of letter writing. I’m not so sure I agree, though, that there wasn’t genuine friendship there. Kilby edits the collection because of the solid spiritual direction in these letters. But there were also moments of tenderness and consideration on Lewis’ part. On Nov 16, 1956, he writes:

“You may as well know…that I may soon be, in rapid succession, a bridegroom and a widower. There may, in fact, be a deathbed marriage. I can hardly describe to you the state of mind I live in at present–except that all emotion, with me, is periodically drowned in sheer tiredness, deep lakes of stupor.”

As he moved towards his own death, he spoke of death and forgiveness with the American Lady. His last letter to her was light and self-deprecating, as was his style.

We see Lewis’ signature pattern throughout his letter collections. His first letters were “Yours sincerely, C.S. Lewis,” or even “most sincerely.” After a few letters, it became “Yours, C.S. Lewis,” intermittent at first, then most regularly. And when the American Lady shares her first name, Lewis does the same:

(I return the compliment by telling you that my friends [all] call me Jack) I am sorry the persecution still goes on. I had that sort of thing at school, and in the army, and here too when I was a junior fellow, and it does v. much darken life. I suppose (tho’ it seems a hard saying) we should mind humiliation less if [we] were humbler…

And she is invited in to what is a pretty tight circle of people who called C.S. Lewis—then a famous children’s author and Christian essayist—his most intimate name, “Jack.” Paul F. Ford noticed that intimacy and titled his Lewis letter collection, Yours, Jack: Spiritual Direction from C.S. Lewis. It really is a collection worth reading.

While there were a few in the “Jack” circle, most of his letters were signed “C.S. Lewis,” or, occasionally, “C.S.L.”—especially on notes and postcards. Once, when the rush of business letters had overtaken Lewis, he signed a letter to his best friend Arthur Greeves like this:

Yours
C.S. Lew
(Nearly did it wrong!)
Jack

It seems he took the intimacy of his nickname seriously! 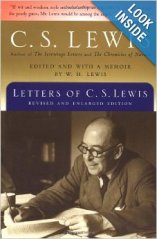 Walter Hooper has pride of place for letter editor. C.S. Lewis’ brother Warren had collected excerpts from the correspondence files in his 1966 Letters of C.S. Lewis, which is especially important for his memoir in the introduction. While Warren Lewis, Clyde Kilby and Paul Ford only collected some of Lewis’ letters, Hooper has endeavoured to collect them all, and has added literary and historical annotations. At nearly 4000 pages, it is a tour de force.

As correspondence is a living history, not all letters are in Hooper’s three volumes. I have found five letters and a note not included, and I suspect over 20 or 30 years we might have reason for a supplemental volume. In reading one of these letter ruffled up from the past, I found a parallel with a letter to Sr. Penelope, Lewis’ literary friend and spiritual mentor. On Oct 9, 1941, he signed:

This is odd. Lewis hated the name “Clive” and left it behind not long after he learned to walk, dubbing himself as “Jacksie” (no, we don’t know why). Moreover, Sr. Penelope is a good friend at this point. Why did he sign as “Clive Lewis?” 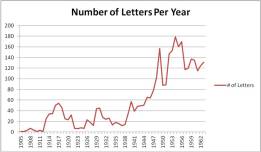 The most frequent use of “Clive,” though, was for John H. McCallum, Lewis’ American editor from 1952 until his death. They wrote from time to time on business matters, but Lewis slowly went from “Dear Mr. McCallum” to “Dear McCallum” to “Dear Mac.” His signatures also moved, but stayed as “C.S. Lewis” for 8 years. Suddenly, he started signing “Clive.” I don’t know why. And on a day that “Clive” wrote to “Mac,” he also wrote to his old friend Mary van Deusen, signing “Clive.” Strange, but true.

So we come back to Sr. Penelope. Only 15 times (in the letters we have) did Lewis sign as “Clive.” 8 of those are to “Mac,” and the rest single occurrences. Three more are in addressing Sr. Penelope. Besides the one noted above, another came a month later on Nov 9, 1941, and then ten days later on Nov 19. He wrote hundreds of letters to Sr. Penelope, so these three are a strange blip in his pattern.

Why did he do it? I don’t know. At this time he was going to confession for the first time, so he may have toyed with using his Christian name—the one he received at baptism—as his pen name, at least with Sr. Penelope who had inspired this movement in him.

Or, perhaps he just did it for fun. His correspondence with Sr. Penelope is unique not only for its content, but because Lewis occasionally (in this period) signs his name as “Brother Ass.” A new nickname? Perhaps. It was most likely a private joke between Lewis and Sr. Penelope. “Brother Ass” was the term that St. Francis of Assisi used to refer to his own body. Lewis found the frustrations of “Brother Ass” more than inconvenient. Intriguingly, Lewis writes to Penelope of his inherent laziness. A bit hard to take from a guy who produced so much.

“A Pilgrim in Narnia” is a blog project in reading and talking about the work of C.S. Lewis, J.R.R. Tolkien, and the worlds they touched. As a "Faith, Fantasy, and Fiction" blog, we cover topics like children’s literature, apologetics and philosophy, myths and mythology, fantasy, theology, cultural critique, art and writing. This blog includes my thoughts as I read through Lewis and Tolkien and reflect on my own life and culture. In this sense, I am a Pilgrim in Narnia--or Middle Earth, or Fairyland. I am often peeking inside of wardrobes, looking for magic bricks in urban alleys, or rooting through yard sale boxes for old rings. If something here captures your imagination, leave a comment, “like” a post, share with your friends, or sign up to receive Narnian Pilgrim posts in your email box. Brenton Dickieson is a father, husband, friend, university lecturer, and freelance writer from Prince Edward Island, Canada. You can follow him on Twitter, @BrentonDana.
View all posts by Brenton Dickieson →
This entry was posted in Reflections and tagged art of letter writing, avatar, Brothe Ass, C.S. Lewis, Collected Letters of C.S. Lewis, letter collections, Letters to an America Lady, St. Francis, Walter Hooper, Yours Jack. Bookmark the permalink.

15 Responses to Yours, Jack… or C.S. Lewis… or Clive… or Brother Ass: The Many Signature of C.S. Lewis