I don’t know about you, but I always put leprechauns in a special category. I knew there was a tinge of danger there–an ambivalence that makes them untrustworthy woodfolk. I am, unfortunately, more affected by Lucky Charms commercials in childhood than genuine lore. Part of that is that almost everything Irish in my culture has been cartooned. And, admittedly, I never connected leprechauns with the rest of folklore. We called them “faëries” or “fairies” growing up here in Prince Edward Island, and we have a rich folktale tradition. In these tales, fairies are unambivalent–they are almost always mischievous and occasionally evil.

Folktales have become a respectable discipline for studying, but it wasn’t always so. When C.S. Lewis was an Oxford Don, from the mid-1920s to mid-1950s, few took Faerie seriously in their curriculum. Part of this may be the close nature of folklore–Lewis references people he knew who had had encounters with faeries–though it may also have been because of the project of Fairyland Disneyfication was already well begun (i.e., how we became the Lucky Charms generation).

C.S. Lewis, however, was a lover of stories of the Little People, from Martianus Capella to George MacDonald, and was especially indebted to Spenser’s Faerie Queene. The Narniad and, to a lesser extent, That Hideous Strength, are Faerie Tales, and were influenced by J.R.R. Tolkien‘s The Hobbit, who also drew from the same traditions. For Tolkien and Lewis, Faerie was a serious topic of discussion. C.S. Lewis gave a lecture on faeries at the oldest and (arguably) most prestigious university in the English world. He did this lecture often, and he did it with a straight face. And we are left this lecture series in a brilliant book, The Discarded Image: An Introduction to Medieval and Renaissance Literature.

More than just fairytale lectures, The Discarded Image is truly an introduction to literature of the period. Anyone reading it should know that it has a nefarious purpose. It intends to disenchant modern students of certain notions–like the idea medieval folk thought the world was flat or the universe was

very small–while providing these students with the medieval view of the universe, their cosmology. It is a tremendously accessible book, and does what it intends to do. The ideas are both native and foreign, intriguingly humorous at times and deliberately disarming at others.

About halfway through C.S. Lewis’ presentation of the medieval cosmology that sits behind their theology, history, science, and art, he turns to one aspect of medieval and renaissance life that the model does not fully take into account: Faeries, or as he calls them, “The Longaevi,” the Longlivers. He begins this chapter–as he so often does–with a quotation from G.K. Chesterton, an early 20th c. author and provacateur:

“There is something sinister about putting a leprechaun in the workhouse. The only solid comfort is that he certainly will not work.”

Intriguingly, leprechauns are never mentioned in the chapter. So what’s the connection? 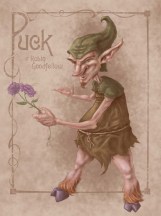 It is amazingly simple: leprechauns are the fairyfolk in strains of Irish folklore. I am now in the editing stage of a fantasy book, The Curse of Téarian, which includes woodfolk who are descendents of the Danaan. I don’t include leprechauns–it isn’t set in Ireland, and the fey in The Curse of Téarian are anything but comical. Except when Dana herself appears and all the woods dance in delight, the “Good Folk” of Téarian’s wood are menacing figures. They haunt the villagers’ imaginations. The local lore is also not ambivalent when it comes to faeries.

You’ll have to wait for the book to come out to know what happens, but it is set well within our fairy folklore. Faerie exists for the pre-modern thinker as a real category for exploration and study, like corn or cows or comets.  Yet, the fey were different, existing somewhere between earth and the heavens. Fairyland has always disappointed anatomical precision–though Faeries are included in books of anatomy and science, in bestiaries and encyclopedias of the period. Indeed, Lewis uses three Milton quotations to roughly categorize Faeries:

Where do leprechaun’s fit in this list? Despite the fact that Lewis begins the chapter with a quote about leprechauns, he does not categorize them. In one sense, they are the dark, swarthy faeries who can haunt and trap. But mostly they are the trickster version of #2, “Faery Elves” of lore. He was probably so clear about it that he didn’t even bring it up. It is us, after a deplorable “Disneyfication” and “prettification” of elves, that cannot tell the difference! Or perhaps they are their own category after all.

Still, if I do meet a leprechaun–an exile from Ireland in new world Acadian forests, I will probably chance the pot of gold.

“A Pilgrim in Narnia” is a blog project in reading and talking about the work of C.S. Lewis, J.R.R. Tolkien, and the worlds they touched. As a "Faith, Fantasy, and Fiction" blog, we cover topics like children’s literature, apologetics and philosophy, myths and mythology, fantasy, theology, cultural critique, art and writing. This blog includes my thoughts as I read through Lewis and Tolkien and reflect on my own life and culture. In this sense, I am a Pilgrim in Narnia--or Middle Earth, or Fairyland. I am often peeking inside of wardrobes, looking for magic bricks in urban alleys, or rooting through yard sale boxes for old rings. If something here captures your imagination, leave a comment, “like” a post, share with your friends, or sign up to receive Narnian Pilgrim posts in your email box. Brenton Dickieson is a father, husband, friend, university lecturer, and freelance writer from Prince Edward Island, Canada. You can follow him on Twitter, @BrentonDana.
View all posts by Brenton Dickieson →
This entry was posted in Reflections, Reviews and tagged C.S. Lewis, Disney, faerie, fairy tales, folklore, George MacDonald, leprechauns, literature, Lucky Charms, Milton, myth, Oxford, Spenser, St. Patrick, The Discarded Image. Bookmark the permalink.

23 Responses to On Leprechauns