Shadows of Shadows of Ecstasy: An Irresponsible Suggestion about Charles Williams’ First Novel

I have rarely been as relieved to complete a novel as Shadows of Ecstasy by Charles Williams. I knew very little about it going in, but wanted to read through his seven “supernatural potboilers” over the next year or so. All Hallows Eve and The Place of the Lion were weird, but brilliant, and War in Heaven was a fun Arthurian romp. Williams’ poetry is difficult and often obscure, but it is always beautiful and evocative. Shadows of Ecstasy was painful to read, occasionally confusing, and obviously filled with a kind of meaning that I found far from obvious.

Despite that, I think it is one of Williams’ most important works.

I have not yet read most of Grevel Lindop’s definitive biography of Williams, or Sørina Higgins’ work on Shadows of Ecstasy at the Oddest Inkling. So it is absolutely irresponsible of me to give the conjecture that I’m about to offer. Still, I wanted to offer it while it is fresh in my mind and I am absolutely naïve of what critics have said about this book.

The Summary (if you can summarize a CW novel)

Shadows of Ecstasy is about a modern-day immortal, Nigel Considine, who has made himself impervious to decay through a psychical and physiological regime of some kind. With this power in place, along with a kind of all-pervasive hypnotic hold and an uncanny sense of the future and an almost perfect reading of human nature, Considine decides to take over the world. He enthralls Africa—yes, the whole continent!—causing the overthrow of colonial European power and an imminent attack on Europe and Great Britain.

We meet this man through a group of London friends, including a famous knighted medical researcher who loves irony, his skeptical nephew, a priest whose heart and belief in ritual are better than his theology, a poet struggling to exist after the age of poets has ceased, the poet’s self-giving wife, and her sister whom I don’t understand. The group is drawn together when they rescue an African man on a London street when the continent is under threat by Black Africa. The rescued man, Inkamasi, turns out to be a Zulu king, partly under the spell of Considine, who helped to usurp Inkamasi’s throne.

Unlike good Scooby gangs, this one splintered upon the revelation of Considine’s power. The priest thinks he’s antichrist, the poet thinks he’s embodied poetry, the poet’s wife knows he will take her husband away, the doctor’s son thinks he’s a business threat, and Sir Bernard, the doctor, seems to get lost in the endless loops of ironies. In order to resist the temptation to become a Christian—in Screwtapian logic, if there’s a devil there must be a God—Sir Bernard spends the last half of the novel serving tea and bread to refugees and acting as a chauffeur when needed.

Weird, I know, but that’s not a radical plotline for Charles Williams. A bit mundane actually. However, riots, international intrigues, plots, murder, rituals, butchered martyrs en masse, submarines, a lecture, and a game of cards fill in the details with Williams’ borderline stream of consciousness prose that was popular in his circle in the 1920s-early 1930s, when he first wrote the novel.

Considine and the Death and Resurrection

I want to set aside the sheer offensiveness and racism within this novel; I might return to that again. This book really is about the nature of death and resurrection and its relationship to poetic-religious ecstasy. To achieve Considine’s state of immortality, one must die and fight one’s way back to life (I think). Here’s an example of a conversion in the novel:

“I will go down to death and come again living,” the [proselyte] said.

Considine’s eyes searched him long in silence: then he said slowly,

“You may not come again.”

“Then let me die in that moment,” the other cried out. “That’s nothing; it doesn’t matter; if I fail, I fail. But it’s not by dreaming of failure that the master of death shall come.” (83-4).

Considine is an imposing figure, speaking very truthfully in the book about the futility of much in this world and about the spiritual path beyond the things of this world. In many ways, this could look like the personification of Christ’s self-giving in to the cross—and I think that Williams does allow that tension to remain in play. But Considine is a parody of this death and resurrection. He calls himself the “Master of Death” (152), with the mission of abolishing death and mortality. The thralldom of Inkamasi shows that Considine is gathering slaves. Utlimately, the people of Africa are sent to war as a sacrifice to Considine, the Master of Death, the Undying One.

The crux of the matter is that Considine is only interested in victory (173). As the Undying one, then, he is only interested in himself. Though he has died and found his way back to life, offering a pathway to the second evolution of humanity, it is not death that leads to life. True resurrection comes from self-death, the leaving aside of the self, the giving in to defeat. Though Considine does not learn this lesson for himself, his end is structured on this same principle, so that the heroic centre of the novel switches from Considine to Inkamasi, the Zulu King denied his throne. In the end, one must drink a bitter cup of gall for the sake of the world and Considine will not do so voluntarily.

To Williams’ credit, his character of the poet gives us such a sympathetic view of Considine that his evil is slow to emerge in the narrative. Alternating between absurdity and boring prose, Williams shows in his first attempt of novel-writing that he has the skill to handle tension.

My proposal—irresponsible as it is—is actually a relatively simple one. One of the creepy things about reading Williams is that he seems so very close to an understanding of power: there is almost a delight in the ritualization of evil in his novels, an understanding that comes from experience, I think. In Shadows of Ecstasy, the hallowed space of tension is actually the man, Considine, rather than a particular object. That man is where the power is, and he is also the base of evil. In Shadows of Ecstasy, Williams seems to have a fascination for Considine like he has for objects of power in other books. 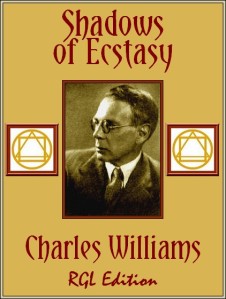 My proposal, then, is that Charles Williams knew Nigel Considine in his real life.

If that’s the case, it may be that his move away from the FRC in the late 1920s was intentional—that he tried to escape that world of power and myth. Or it could be that Shadows of Ecstasy is a villainizing of some parts of that past. Or—and I think this is the critical point—it could be that Considine’s power is a fictionalized version of psycho-spiritual power that Williams possessed through ritualized relationships (either in his occult groups or in the fellowships that he created). After all, Williams’ real life ritualistic power play continued in his relationships with women in his circle into the 1930s. He may have rejected the victory-centric parody of the cross in Considine on principle, but he had his own thralls and required self-giving love of others in a way that Considine does.

Perhaps it was the power that he could never escape, a temptation that he sought to overcome. 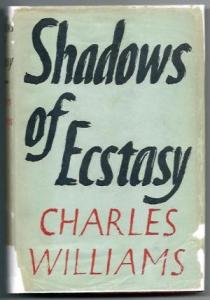 Or, perhaps Charles Williams is like Considine, “who was an entire mythology about himself” (222). I have always suspected that, unlike Dante and his Beatrician vision that Williams respected so much, the modern poet and lover of the hallows Charles Williams got lost in his own mythology.

This is, of course, a terribly egregious application of the Personal Heresy (using the poetry to psychologize the poet). But I have always felt like I was getting to know Charles Williams from his books. And each book I read made that acquaintance more intimate, more fascinating, and more troubling.

If I am right, it is like some other critic–a responsible one–has made the link. There are other options, though. I may be misunderstanding the book. I may be making a link between life and art that is unwarranted. Williams might have been quite okay and I’ve misunderstood the scraps of biography that are in my mind. I will read Grevel and Sørina’s work and perhaps retract my thoughts.

But I suspect, unfortunately, I am not far from wrong, and that Shadows of Ecstasy is a self-revelation of the power that Charles Williams held within in his chest and its difficult relationship with his Christian faith. I cannot help but thinking that, like Considine, Williams was a powerful man lost within his own mythology.

This may have been a painful book to read, but it was an important one.

“A Pilgrim in Narnia” is a blog project in reading and talking about the work of C.S. Lewis, J.R.R. Tolkien, and the worlds they touched. As a "Faith, Fantasy, and Fiction" blog, we cover topics like children’s literature, apologetics and philosophy, myths and mythology, fantasy, theology, cultural critique, art and writing. This blog includes my thoughts as I read through Lewis and Tolkien and reflect on my own life and culture. In this sense, I am a Pilgrim in Narnia--or Middle Earth, or Fairyland. I am often peeking inside of wardrobes, looking for magic bricks in urban alleys, or rooting through yard sale boxes for old rings. If something here captures your imagination, leave a comment, “like” a post, share with your friends, or sign up to receive Narnian Pilgrim posts in your email box. Brenton Dickieson is a father, husband, friend, university lecturer, and freelance writer from Prince Edward Island, Canada. You can follow him on Twitter, @BrentonDana.
View all posts by Brenton Dickieson →
This entry was posted in Reflections and tagged A.E. Waite, All Hallows Eve, Charles Williams, Descent into Hell, Fellowship of the Rosy Cross, occult, post colonial criticism, Shadows of Ecstasy, The Place of the Lion. Bookmark the permalink.

60 Responses to Shadows of Shadows of Ecstasy: An Irresponsible Suggestion about Charles Williams’ First Novel