Posted on April 1, 2014 by Brenton Dickieson 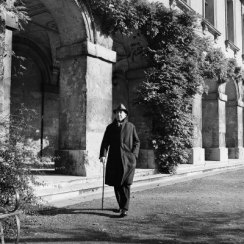 Far from scandalous, the story of C.S. Lewis’s late-in-life son is tale of great sadness and ultimately literary frustration. C.S. Lewis, Jr.—called “Little Jack” by all those who knew the family—was the surprise pregnancy of Joy Davidson Lewis. Tragically, her pregnancy was discovered in the midst of her diagnosis with cancer. The moment of Little Jack’s birth was bitter sweet. Within a year, Joy succumbed to her cancer. Three years later, in 1963, C.S. Lewis passed away in his home, leaving behind his brother, Warren, two step-sons, and his own young namesake.

In today’s culture, the author of Narnia would doubtless have been thrust into the public eye anytime he appeared in his front door. And the orphan of two literary geniuses would probably have grown up with that legacy played out in public. But in the 1950s, C.S. Lewis was able to live a quiet life of relative privacy. As a result, Little Jack was able to grow up in the home of family friends without interference. 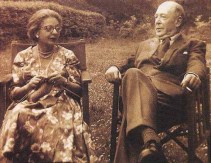 By all accounts, he had a loving upbringing. He was bright and capable as a student, and showed some interest in writing even in childhood. As a teenager too young for the revolution of the 1960s, he struggled in his teens without a roadmap for the 70s. This poem, submitted for a school assignment, led to meetings between Little Jack’s foster parents and his teachers:

It continues along the same lines for twenty-two more pages. Little Jack’s poetry would improve, but he was caught up in the poetic movements in the 1970s. His one published poem of the period is more sophisticated than his earlier attempt, though along the same lines:

Little Jack graduated university, emerging from this dark poetic environment into a freelance market that was challenging at the best of times. Refusing his father’s estate with the desire to shrug off the legacy and make it on his own, Little Jack took odd jobs as an exterminator, a car salesman and a letter sorter. Each time his family story was discovered, Little Jack would change jobs, and eventually left England to join a team of migrant fruit pickers. While doing that job he made his way to the Middle East, perhaps with the idea of finding his estranged step-brother in India.
The pinnacle of his career was working as a bodyguard for a royal family in Qatar. It was in Qatar that Little Jack had his first success, writing a column for the Qatari Daily News. Only later did he discover that the entire paper was created by Qatari prince Abd al Salaam to make Little Jack feel like he had something useful to do. Little Jack had never, apparently questioned why a thin, relatively short, bookish Englishman would be hired to protect the royal family.

When Jack discovered the truth, he was sorely disappointed, having loved the column so very much. He quit the palace, leaving behind a saddened team of Daily News staff. Sources say that his departure led to the ultimate demise of the Qatari Daily News, which in just a few short years had become a cult classic in Mideast international cafés.

The change seems to have been inspirational, however. On his way back to Britain, working on a Mediterranean cruise ship and then hitchhiking across Europe, he had what was his first really good idea. His journal was filled with writing ideas, including the following:

Once there were four children whose names were Samuel, Sharon, Sheldon and Chakrabatra. This story is about something that happened to them when they were sent away from home because their parents did not appreciate their super honest poetry.

There was a boy called Leroy Anatolia Crabb, which wasn’t a very good name at all.

There is some evidence that Little Jack struggled to find an original voice. But as he bought a used copy of Frommer’s Complete Guide to Southwest Iberia, he had his first truly original idea. This is sketched in his copy of the Guide, now in the “C.S. Lewis, Jr.” archive:

What about the story of a bumbling fool who hitchhikes across the entire universe thumbing rides with spaceships and falling in love with aliens? A title like, Space is Really Big, or something. He would need a sidekick.

Little Jack’s first break in writing came with the short story, “Chakrabatra’s Dark Years,” the story of a medieval fairy forced to grow up in the London punk scene in the 1980s. There are moments when the writing is less than clear and the characters seem forced. But when a leading critic suggested it was a sophisticated critique of Margaret Thatcher’s leadership, it enjoyed Cinderella status in English literary circles. There are also suggestions that the storyline was behind Astroboy S03E11, but that was never confirmed.

Despite this success, Little Jack continued to struggle. He sketched out a series of books on the idea of a man drawn into the invisible ghostly parallel world of Oxford, only to turn on the television and see a startlingly similar programme on the BBC. Determined not to be discouraged, he remembered his father’s fascination with F. Anstey’s Vice Versa, the story of a boy and father who change bodies, forcing the father to experience life as a schoolboy. This is what Little Jack wrote in his journal:

What if, instead of being a man trapped in a boy’s body, he was a magician in an urban world? New York or something. Finally, “Jack Gardener” is snatched away by fellow magicians to an entire elite public school for magicians. The boy tries to find his way as a magician, only to realize that students are students no matter what school he goes to. As he struggles to find his identity, it is slowly revealed that Jack’s parents were really famous and successful authors magicians, and that the boy has really grown up as an orphan in his own home.

This thinly-veiled autobiographical fantasy outline was augmented with a few notes, but the date is important: 21 Jun ’97. A week later, Harry Potter and the Philosopher’s Stone was released, and those closest to Little Jack admit that he took it hard. It was then that he disappeared from his public life as a struggling writer in England. He has never been heard of since.

There is some indication that he may have continued writing under a pseudonym in his most successful genre, the short story. In the early days of usenet discussion groups online, there was speculation that Little Jack would find his voice and break into the market. There was a widespread rumour that this had happened, and he was the pseudonymous author Robin Hobb (now confirmed to be Margaret Astrid Lindholm Ogden). The various Hobb books do carry on a literary legacy that began with C.S. Lewis’ early space fantasies, but the American and feminine voice led many to doubt.

Today, Little Jack still remains an enigma. With the release of any new fantasy series from an obscure or pseudonymous author, “that son of C.S. Lewis” emerges again in the discussion as a possibility among serious fans and industry insiders. I’m not convinced, however, that we will ever hear from him again. If I had to guess, Little Jack—the son of C.S. Lewis and Joy Davidman—found his way through to a literary voice, and is writing in obscurity in some tiny hamlet of the world. And, in this sense, he is much like his father, content with pen in hand, and content to be left alone.

“A Pilgrim in Narnia” is a blog project in reading and talking about the work of C.S. Lewis, J.R.R. Tolkien, and the worlds they touched. As a "Faith, Fantasy, and Fiction" blog, we cover topics like children’s literature, apologetics and philosophy, myths and mythology, fantasy, theology, cultural critique, art and writing. This blog includes my thoughts as I read through Lewis and Tolkien and reflect on my own life and culture. In this sense, I am a Pilgrim in Narnia--or Middle Earth, or Fairyland. I am often peeking inside of wardrobes, looking for magic bricks in urban alleys, or rooting through yard sale boxes for old rings. If something here captures your imagination, leave a comment, “like” a post, share with your friends, or sign up to receive Narnian Pilgrim posts in your email box. Brenton Dickieson is a father, husband, friend, university lecturer, and freelance writer from Prince Edward Island, Canada. You can follow him on Twitter, @BrentonDana.
View all posts by Brenton Dickieson →
This entry was posted in Reflections and tagged C.S. Lewis, Daily News, Douglas Adams, fantasy, Harry Potter, Joy Davidman, literature, Margaret Thatcher, Neil Gaiman, On Writing, The Lego Movie, writing. Bookmark the permalink.

12 Responses to The Obscure Writings of C.S. Lewis, Jr.