Week 3 in the Great Divorce Read-Along: A Handy Chart

Posted on November 24, 2014 by Brenton Dickieson

Today is the 70th anniversary of the third installment of the weekly story that we now know as The Great Divorce. Week 1 and Chapter 1 were the same, so that a reader picking up the book today and a reader 70 years ago would have experienced the same thing, except that it was squeezed between editorials on organ music, advertisements for “Winox: The Meat and Malt Wine,” and reminders about the Church of England Waif and Strays Society. This clip of The Guardian from Nov 24, 1944 also includes “A Layman’s Quiz” with the final paragraphs of the 3rd installment:

The Great Divorce is the second time that Lewis used The Guardian to print a small book in weekly form. With The Screwtape Letters, one letter was printed each week. Lewis was meticulous about length. If you visit the original Screwtape handwritten manuscript in the Berg Collection at the New York Public you will see that each letter is within a line in length of all the rest. The single exception is the last letter, where Screwtape waxes lyrical about Wormwood’s failure and the translation of the human soul into the heavenly realities. 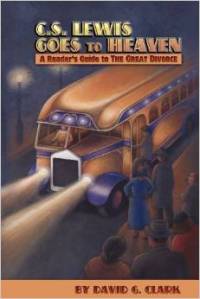 The divisions in The Great Divorce are not so neat. For one thing, the kind of book is very different. The Great Divorce is a spiritual triptik. As Christian in The Pilgrim’s Progress or Odysseus in The Odyssey or Dorothy in The Wizard of Oz move from scene to scene encountering a new test in each new geography, the protagonist of The Great Divorce moves from character to character, hearing the story that either draws a soul heavenward or traps a soul hellward.

Some of these stories are very brief. I have not yet read the book, but David G. Clark includes a chart at the end of C.S. Lewis Goes to Heaven: A Reader’s Guide to the Great Divorce that describes how much space each character gets. Some characters get 1/3 or 1/2 a page; one gets 13 pages of treatment. Sometimes Lewis delves deep into a character’s psychology; other times he allows the reader to create a caricature with a single phrase or a quick glance.

I am indebted to David Clark for the idea of creating a chart. Dr. Clark is a biblical scholar by training. With meticulous determination, Clark uses a series of appendices to C.S. Lewis Goes to Heaven to draw out a host of biblical, classical, and literary allusions in The Great Divorce. One of these charts includes a list of characters, their “sin” that makes adapting to the High Countries a challenge, and how much space is given to their story.

Since it is such a great idea, I’ve used it to create my own list. I’ve adapted his characters a little bit, adding names or their accompanying spirits (when named). I’ve changed a number of the “sins,” not really because I disagreed, but in order to give a bit more depth. I’ve also added a “saying” that (I think) captures the ghost’s (anti-)spirituality in one quick breath.

Most significantly, though, I use this chart as a way to remember which week goes with which chapter of the book. For example, readers of the original series would have been left hanging halfway through a conversation at the midpoint of chapter 2. They would have had to wait a whole week for the next part of the story–almost an unheard of idea in our Netflix generation!

I had to split the chart in two. Send a tweet @BrentonDana if you want the actual file to twist into your own chart, as I have done. Do reference back, though, if you use it elsewhere. For those reading along with the original run of The Great Divorce 70 years ago, here are the weekly breakdowns. And for those who are wanting to submit a blog on The Great Divorce, you can use this chart to line up the dates for your submission.

“A Pilgrim in Narnia” is a blog project in reading and talking about the work of C.S. Lewis, J.R.R. Tolkien, and the worlds they touched. As a "Faith, Fantasy, and Fiction" blog, we cover topics like children’s literature, apologetics and philosophy, myths and mythology, fantasy, theology, cultural critique, art and writing. This blog includes my thoughts as I read through Lewis and Tolkien and reflect on my own life and culture. In this sense, I am a Pilgrim in Narnia--or Middle Earth, or Fairyland. I am often peeking inside of wardrobes, looking for magic bricks in urban alleys, or rooting through yard sale boxes for old rings. If something here captures your imagination, leave a comment, “like” a post, share with your friends, or sign up to receive Narnian Pilgrim posts in your email box. Brenton Dickieson is a father, husband, friend, university lecturer, and freelance writer from Prince Edward Island, Canada. You can follow him on Twitter, @BrentonDana.
View all posts by Brenton Dickieson →
This entry was posted in Reflections and tagged C.S. Lewis, fantasy, Homer, Netflix, Pilgrim's Progress, The Great Divorce, The Oddysey, The Screwtape Letters, The Wizard of Oz, writing. Bookmark the permalink.

17 Responses to Week 3 in the Great Divorce Read-Along: A Handy Chart