Matthew Dickerson’s “The Rood and the Torc”: A Winter Tale

Posted on January 30, 2015 by Brenton Dickieson

When I walk into a bookstore and scan the shelves, I am inevitably met with dozens of book jackets featuring Amish women in bent grass landscapes, or mysterious looking Elizabethan courtiers ready to be betrayed (or to do the betraying), or, more recently, turned-on teenage girls with pale skins and red lipstick who have their own vampires lurking in the background. I suspect some of these books are good, but my eyes blur as the books overlap with one another and I simply lose interest. Some days I lose hope for pop fiction altogether.

That’s why it is so refreshing when something so penetratingly unique emerges from the blur. Such is the case with Matthew Dickerson’s new novel, The Rood and the Torc: the Song of Kristinge, Son of Finn (2014). As I talk about this winter tale, I’ll add a little more background of the Norse world.

Kristinge, the protagonist, is a destiny child. An austere and quiet monk in an early medieval France, Kristinge is content to make his way as a scribe, gardener, and brother of men in his secluded monastery. His world is disrupted when he hears the the last words of a dying warrior. Kristinge is shocked to discover that he is of royal Frisian blood, and has been hidden with his protector Willimond at the monastery until he is mature enough to face his destiny. Haunted by the possibilities of the tangled path before him, Kristinge and Willimond set out to explore these paths, taking their robes and staffs and a few coins as they journey from the mountains of France, through the faltering city of Paris and the bare lands of Friesland and Saxony, to the cold shores of Denmark.

Without burdening the reader in detail, Dickerson describes intimately the simple actions of finding food, getting lodging, retaining passage, and remaining safe on the road act as a portkey to the Franco-Germanic world of the 6th century. And for most of us that world is very remote. I can feel the distance when I pick up Beowulf, even in a good translation. It is a world after the fall of Rome and before the rise of Charlemagne that will redefine Europe. Brendan and Patrick have begun the conversion of Ireland, the deep roots of Arthur are working into the British imagination, and the Danes are moving toward an era of Viking supremacy. Though many of us in Western Europe and North America trace our roots to this ancient past, it remains completely foreign to us. Yet Dickerson is able to help us slip easily into the story.

The character of Kristinge himself helps us appreciate the contrast between our world and his. Kristinge is a Christian monk in an age before the conversion of Europe, a pacifist in an era of war and brutality, and a sympathetic soul when such folk are hard to find. As Kristinge is faced with his royal destiny, he comes to realize that when he takes up the torc of his people (the crown) it will inevitably mean taking up the sword. The kings and clan leaders Kristinge meets are men of cunning brutality, and it becomes difficult to see how Kristinge will follow that path. Can he become like Gideon or David in a land where mead hall stories are of the great feats of Valhalla, the mead hall of the slain?

Intriguingly, Kristinge’s bridge to the pagan world around him comes from a skill he learned in childhood. Like King David, he is blessed with the gift of song, and his harp gains him entrance to the halls of the great men of the era. He is truly a reluctant bard at first, but Kristinge soon sees that his art can become a vehicle for his Christian expression. With great skill Kristinge weaves together biblical stories and principles of Christian humility and love with the great poems and stories of France, Friesland, and Danemark.

And it is these scenes that I love the most, the times when Kristinge takes up the harp in the mead halls and sings to audiences of courtiers and thanes and warriors. There are a dozen alliterative poems throughout The Rood and the Torc, some of which are translations of Old English, and some are Dickerson’s own creation–an astonishing feat today. Dickerson’s secret is that he studied Old English as a grad student, so he is intimately familiar with the alliterative poetry that is authentic to the period. Indeed, it isn’t even so much that the poems adorn the book, or even show off his skill as a translator and musician. It is more true that the character of Kristinge and his story emerge from the poetry itself, so that the stories and songs are intricately linked in imaginative authenticity. It really is a superb feature of the book.

One of the most fascinating parts about this book is the tension Kristinge feels about his own destiny. Tucked away as a claimant to a seat of power with a name to become a chieftain of chieftains, Kristinge is uncertain about where he fits in the world. The tri-vocational tension of artist, leader, and pastor resonates through the pages of the The Rood and the Torc. I wonder if this isn’t Dickerson’s tension as well, if we can replace “leader” with academic or teacher. Kristinge himself finds the resolution of this tension as he works out a theology that balances between cultural artistic engagement and cultural prophetic critique. I don’t think it is a coincidence that my favourite book of Dickerson’s is his The Mind and the Machine, which is a theology of culture in its own right.

Maybe I am in danger here of committing the personal heresy, of imagining too deeply into Matthew Dickerson’s motivations. So let me say flat out that if this tri-vocational tension is not true of Dickerson, it is certainly true of me. My whole adult life has been about the writer-teacher-pastor tension, and it seems to have resolved itself in my own life in a theology of culture. The Rood and the Torc for me, then, was not only a great read—I gobbled it down in a series of late night reading binges—but it was also shockingly prescient of my own human experience. 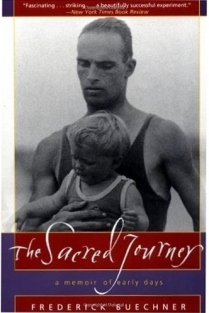 Perhaps all the good books do exactly this. I don’t know. But Matthew Dickerson did in this novel what Frederick Buechner did for me in his memoirs. And although Buechner’s Godric and Brendan are radically different as books, like The Rood and the Torc they transport the reader into the wonder of the medieval world through the eyes of its early saints.

I realize I have not spoken much of the storyline, and have focussed on the narrative textures of character, scenery, culture, language, theology, vocation, and art. The story is good too, and you can easily read it yourself! I was frustrated with the ending of the storyline until it actually came together, but it drove me forward as a reader. This is no Brown-Grisham-Patterson where everything hangs on plot. Instead, The Rood and the Torc is a rich book, complex in imaginative wonder and yet accessible to the curious reader.

Dickerson is best known for his nonfiction work, including From Homer to Harry Potter: a Handbook of Myth and Fantasy (2006), The Mind and the Machine: What it Means to Be Human and Why it Matters (2011), and a number of books on J.R.R. Tolkien and C.S. Lewis. Truly, Dickerson is a diverse artist-scholar, producing works that range from folk albums and musicology books to computer science models and literary criticism. According to his website, he just released a fly fishing book, and is publishing the first in a fantasy trilogy. All of this is on top of (and occasionally part of) his role as a university professor. Busy fellow.

Where does The Rood and the Torc fit in this resume? The answer to this question is intriguing. While The Rood and the Torc is a tight, imaginative, literary narrative, it also displays the breadth of Dickerson’s personal palette. The novel brings together all of his interests. It is an environmentally rich outdoors novel, filled with Christian thought and imaginative play, and resounding with song. And while there is little overlap with The Rood and the Torc and Tolkien’s legendarium, the 6th century context is evocative of the world that Tolkien used both as a reference point and as imaginative inspiration. The Rood and the Torc has that “Northernness” that C.S. Lewis felt captured his sense of eternal longing; indeed, it is as if Kristinge brings together the humility of Frodo and the mysticism of Ransom. Dickerson takes the protagonist further than either Frodo or Ransom in moving through the personal struggles with destiny to a sense of vocation in the end. But in many ways the novel rhymes with the work of the Inklings as it captures the best of Dickerson’s other expressions.

For those that love books filled with art and ideas, The Rood and the Torc is a must read–a great book for a long winter’s read. Although Matthew Dickerson has not quite renewed my faith for popular fiction altogether, he has made me sensitive to the fact that I need to move past the bookstore displays of mainstream trends to the small press section where this generation of writers are resisting the restrictions of sales demands and producing books that are worth reading and owning and passing on to the next generation. The Rood and the Torc is one of those books.

“A Pilgrim in Narnia” is a blog project in reading and talking about the work of C.S. Lewis, J.R.R. Tolkien, and the worlds they touched. As a "Faith, Fantasy, and Fiction" blog, we cover topics like children’s literature, apologetics and philosophy, myths and mythology, fantasy, theology, cultural critique, art and writing. This blog includes my thoughts as I read through Lewis and Tolkien and reflect on my own life and culture. In this sense, I am a Pilgrim in Narnia--or Middle Earth, or Fairyland. I am often peeking inside of wardrobes, looking for magic bricks in urban alleys, or rooting through yard sale boxes for old rings. If something here captures your imagination, leave a comment, “like” a post, share with your friends, or sign up to receive Narnian Pilgrim posts in your email box. Brenton Dickieson is a father, husband, friend, university lecturer, and freelance writer from Prince Edward Island, Canada. You can follow him on Twitter, @BrentonDana.
View all posts by Brenton Dickieson →
This entry was posted in Reviews and tagged Beowulf, C.S. Lewis, Frederick Buechner, Inklings, J.R.R. Tolkien, literature, Matthew Dickerson, medieval, Old English, Rood, theology, Theology of Culture, vocation. Bookmark the permalink.

15 Responses to Matthew Dickerson’s “The Rood and the Torc”: A Winter Tale