“…In the Vacant Places” by T.S. Eliot 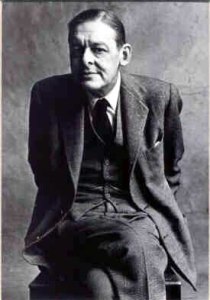 It is the weekend, and I am in the mood for a little treat. C.S. Lewis was a slow convert to T.S. Eliot’s poetry. In fact, Lewis was part of an entire club dedicated to mocking the modern poetry movement that Eliot led. Slowly, the common ground between Lewis and Eliot became greater and greater. First they shared some thoughts (and good disagreements) on literary criticism. Then they were both very close friends with Charles Williams. Later in life, their 1920s conversions and love for poetry came to the point of working together on a new English translation of the Psalms. In the end, they were friends. When Lewis anonymously submitted his memoir of the loss of his wife, T.S. Eliot knew immediately that it was Lewis. He kept the secret, and published A Grief Observed under the name N.W. Clerk.

Lovers of 20th century poetry will be no strangers to Eliot. I am a slow convert, but never have had the distaste for Eliot that Lewis had. I’m just a weak reader who needs better poetry muscles. But even in my weakness, there are moments in T.S. Eliot that I find sublime. Here is one of them, pulled from Eliot’s Choruses from The Rock. Here Eliot talks about today’s scattered world, how we are all “dispersed on ribbon roads.” We need one another, Eliot reminds us.

Let me show you the work of the humble. Listen.

In the vacant places
We will build with new bricks

What life have you, if you have not life together?
There is not life that is not in community,
And no community not lived in praise of GOD.

And now you live dispersed on ribbon roads,
And no man knows or cares who is his neighbor
Unless his neighbor makes too much disturbance,
But all dash to and fro in motor cars,
Familiar with the roads and settled nowhere.

“A Pilgrim in Narnia” is a blog project in reading and talking about the work of C.S. Lewis, J.R.R. Tolkien, and the worlds they touched. As a "Faith, Fantasy, and Fiction" blog, we cover topics like children’s literature, apologetics and philosophy, myths and mythology, fantasy, theology, cultural critique, art and writing. This blog includes my thoughts as I read through Lewis and Tolkien and reflect on my own life and culture. In this sense, I am a Pilgrim in Narnia--or Middle Earth, or Fairyland. I am often peeking inside of wardrobes, looking for magic bricks in urban alleys, or rooting through yard sale boxes for old rings. If something here captures your imagination, leave a comment, “like” a post, share with your friends, or sign up to receive Narnian Pilgrim posts in your email box. Brenton Dickieson is a father, husband, friend, university lecturer, and freelance writer from Prince Edward Island, Canada. You can follow him on Twitter, @BrentonDana.
View all posts by Brenton Dickieson →
This entry was posted in Memorable Quotes and tagged C.S. Lewis, Charles Williams, literary criticism, Poetry, Reflections on the Psalms, T.S. Eliot. Bookmark the permalink.