Elves and Fairies and Yokai, Oh My!

Posted on September 18, 2015 by Brenton Dickieson 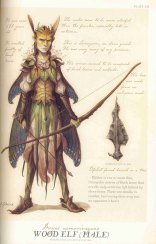 For today’s Friday Feature, I wanted to share this fun little blog on Elves and Faeries by writer and friend of A Pilgrim in Narnia, L.A. Smith.

I’ve blogged before about C.S. Lewis’ faerie lecture in The Discarded Image, and guest blogger Prof. J. Aleksandr Wootton has shared his great resource list. This post takes the conversation both global and to the point of what writers can do today.

Here’s the new link to this file: click here.

“Go not to the Elves for counsel, for they will say both no and yes.”

Elves are fascinating creatures of legend, and their roots go deep into our history. And when I say “our”, I mean collective mankind, for although we may think that the concept of elves is a Western European one, you can actually find elf-like creatures in most of the world’s mythology. In the Norse and Germanic cultures they are alfar, supernatural beings having great beauty and long lives, sometimes helping humans, sometimes hindering them. These are the Tolkein elves,for the most part, which is not surprising, as his LOTR saga was based on Norse mythology.

Many legends of elves speak of the Trooping of the Elves, a mysterious night trek of a long line of elves, and woe to the human who spies them! This is referenced in Lord of the…

“A Pilgrim in Narnia” is a blog project in reading and talking about the work of C.S. Lewis, J.R.R. Tolkien, and the worlds they touched. As a "Faith, Fantasy, and Fiction" blog, we cover topics like children’s literature, apologetics and philosophy, myths and mythology, fantasy, theology, cultural critique, art and writing. This blog includes my thoughts as I read through Lewis and Tolkien and reflect on my own life and culture. In this sense, I am a Pilgrim in Narnia--or Middle Earth, or Fairyland. I am often peeking inside of wardrobes, looking for magic bricks in urban alleys, or rooting through yard sale boxes for old rings. If something here captures your imagination, leave a comment, “like” a post, share with your friends, or sign up to receive Narnian Pilgrim posts in your email box. Brenton Dickieson is a father, husband, friend, university lecturer, and freelance writer from Prince Edward Island, Canada. You can follow him on Twitter, @BrentonDana.
View all posts by Brenton Dickieson →
This entry was posted in Guest Blogs, Reflections and tagged C.S. Lewis, Discarded Image, faerie, fairy tales, Friday Feature, guest blog, J. Aleksandr Wootton, writing. Bookmark the permalink.

10 Responses to Elves and Fairies and Yokai, Oh My!