Posted on October 15, 2015 by Brenton Dickieson 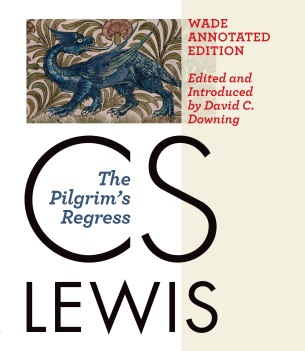 C.S. Lewis tried a number of times to write his spiritual autobiography. When in 1930 he had come to a philosophical belief in God, but was not yet a Christian, he gave a start to the story. It has finally been published, incomplete as it is, by Andrew Lazo in the 2013 volume of VII.

Three years later Lewis is a Christian and is enjoying some vacation time at a friend’s house. Knowing the story is still rattling around inside of him, he finds a little corner and begins to map out his conversion narrative like John Bunyan’s Pilgrim’s Progress. Two weeks later he had a complete book, The Pilgrim’s Regress (1933) Lewis never thought this obscure little book quite did what he wanted his conversion story to do. It is an odd, rich, difficult little book, so it never does reach a popular audience. I would encourage you to check out David C. Downing‘s Wade Annotated Edition, just out for the first time this year. 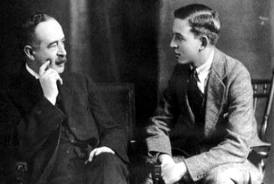 In his introduction to The Problem of Pain (1940), Lewis’ little book on spiritual theology and popular apologetics, Lewis tells a bit of his conversion story. Perhaps this was for Lewis a tug back to a still untold story. But his increasing fame and success in WWII swept him away from his own story to other stories, and his spiritual autobiography remained unwritten.

We do have, however, an accidental autobiography. Alan Jacobs tells the story well in his book The Narnian: The Life and Imagination of C.S. Lewis (2005). Asked by his American publisher for a brief sketch of his life for one of his book jackets, Lewis quickly jotted something down. They printed it largely as it was. I have never known what book cover it was printed in, but recently Dan Hamilton wrote me to tell me it is in the 1st American Edition of Perelandra. Dan worked with Dr. Edwin Brown in the essential resource, In Pursuit of C.S. Lewis. Here is what Lewis sent in a letter as transcribed by Jacobs (left) with a picture of the Perelandra flap from Dan Hamilton (right):

I was a younger son, and we lost my mother when I was a child. That meant very long days alone when my father was at work and my brother at boarding school. Alone in a big house full of books. I suppose that fixed a literary bent. I drew a lot, but soon began to write more. My first stories were mostly about mice (influence of Beatrix Potter), but mice usually in armor killing gigantic cats (influence of fairy stories). That is, I wrote the books I should have liked to read if only I could have got them. That’s always been my reason for writing. People won’t write the books I want, so I have to do it for myself: no rot about “self-expression.” I loathed school. Being an infantry soldier in the last war would have been nicer if one had known one was going to survive. I was wounded—by an English shell. (Hence the greetings of an aunt who said, with obvious relief, “Oh, so that’s why you were wounded in the back!”) I gave up Christianity at about fourteen. Came back to it when getting on for thirty. An almost purely philosophical conversion. I didn’t want to. I’m not the religious type. I want to be let alone, to feel I’m my own master: but since the facts seemed to be the opposite I had to give in. My happiest hours are spent with three or four old friends in old clothes tramping together and putting up in small pubs—or else sitting up till the small hours in someone’s college rooms talking nonsense, poetry, theology, metaphysics over beer, tea, and pipes. There’s no sound I like better than adult male laughter (The Narnian xvi-xvii).

It is an unusually terse outline. Jacobs is probably right when he said:

The sentence fragments, colloquialisms, and general bluntness of tone—all uncharacteristic of Lewis’s public writings—suggest that he dashed this off without editing it, perhaps without even thinking about it too seriously. Lewis undoubtedly expected the people at Macmillan to recognize this as a rough pile of facts from which they were at liberty to construct a more formal narrative (The Narnian xvii).

That may have been what Lewis expected, but it is not what happened. Whether because of the authority of Lewis’ signature, or lack of care in the office, or because of the faint humour in the stark sketch, MacMillan published it!

Still, Lewis’ accidental autobiography does not lack much in outline form. A decade later Lewis wrote Surprised by Joy: The Shape of My Early Life (1954), finally filling this narrative gap, even if the subtitle leaves open possibilities for the future. Not only does the letter to MacMillan show the contours of the later memoir, Jacobs notes that it has in it “the basic narrative shape of his experience” (xvii).

Sometimes the story even tells itself when we are not paying attention.

“A Pilgrim in Narnia” is a blog project in reading and talking about the work of C.S. Lewis, J.R.R. Tolkien, and the worlds they touched. As a "Faith, Fantasy, and Fiction" blog, we cover topics like children’s literature, apologetics and philosophy, myths and mythology, fantasy, theology, cultural critique, art and writing. This blog includes my thoughts as I read through Lewis and Tolkien and reflect on my own life and culture. In this sense, I am a Pilgrim in Narnia--or Middle Earth, or Fairyland. I am often peeking inside of wardrobes, looking for magic bricks in urban alleys, or rooting through yard sale boxes for old rings. If something here captures your imagination, leave a comment, “like” a post, share with your friends, or sign up to receive Narnian Pilgrim posts in your email box. Brenton Dickieson is a father, husband, friend, university lecturer, and freelance writer from Prince Edward Island, Canada. You can follow him on Twitter, @BrentonDana.
View all posts by Brenton Dickieson →
This entry was posted in Memorable Quotes, Reflections and tagged Alan Jacobs, books, C.S. Lewis, Collected Letters of C.S. Lewis, Pilgrim's Regress, Spiritual Autobiography, Surprised by Joy, the Narnian, The Problem of Pain, theology, writing. Bookmark the permalink.