Posted on February 29, 2016 by Brenton Dickieson 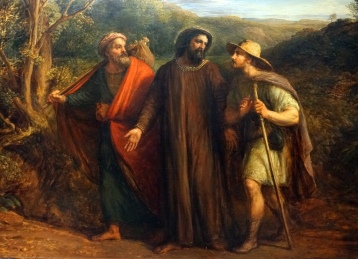 It is one of the more intriguing appearances of Jesus after the puzzling event of the empty tomb. Rather than grand appearances, Christ slowly slipped into the lives of his disciples, visiting two or three at a time while skirting Jerusalem after the heat of that holy weekend.

As can only happen in the days before social media made it possible, back when people lived their lives out of doors, rumours of the Nazarene filled every empty social space. “You must be the only person in Jerusalem who hasn’t heard about all the things that have happened there the last few days,” one of Jesus’ followers exclaim when a stranger joins them on the road. Certainly everyone else knows. It’s all everyone is talking about.

“What things?” the stranger on the road asks.

This was hardly an uncommon scene. Two men are traveling on the way, and another sidles up to them. There is a pattern for pilgrims ready for a talk on the road. They fall into step, leaning in just a little to find out if these are the kind of people and this the kind of conversation that would help the dusty miles slip away. There is strength in numbers on the road, and after a while one mile starts to look like the last. How many of our great stories start on the road?

For whatever reason, the stranger joined in with the two disciples and wonders about the rumours on their lips. So they told him about the things that happened to Jesus of Nazareth:

“He was a prophet who did powerful miracles, and he was a mighty teacher in the eyes of God and all the people.  But our leading priests and other religious leaders handed him over to be condemned to death, and they crucified him.  We had hoped he was the Messiah who had come to rescue Israel. This all happened three days ago.”

This is the news, but then there was the rumour:

“Then some women from our group of his followers were at his tomb early this morning, and they came back with an amazing report.  They said his body was missing, and they had seen angels who told them Jesus is alive!  Some of our men ran out to see, and sure enough, his body was gone, just as the women had said.”

“Isn’t it obvious?” he answered. “The whole story has led up to this point. Suffering had to precede fame for Messiah. The prophets said all this and more. How come you didn’t see it?”

We know as readers who the stranger is. He is this Jesus, the crucified one. Luke lets us in on the secret. But because of sun or sorrow or miles and miles of sand, these sad Christ-followers could not see it. So the stranger began to talk, then.

Then Jesus took them through the writings of Moses and all the prophets, explaining from all the Scriptures the things concerning himself.

Oh to be there on that road and hear those words! A lot of my work in biblical studies has been an attempt to fall into step behind the stranger and lean in just a little. 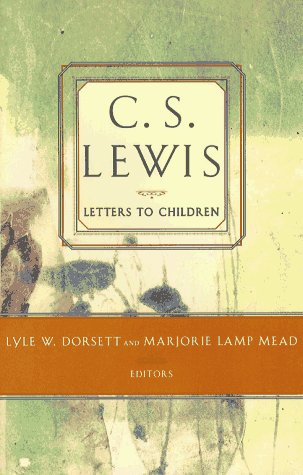 I’ve always been struck by how often children asked C.S. Lewis for more Narnia books in their letters to him. Some adults asked as well. But it was to the children that Lewis focused his responses. He never promised new Chronicles. After The Last Battle was published, Lewis never looked back. Instead, Lewis would answer like this:

“But why don’t you try writing some Narnian tales? I began to write when I was about your age, and it was the greatest fun. Do try!” (to Jonathan Muehl, Mar 29, 1961)

“And why not write stories yourself to fill up the gaps in Narnian history?” (to Denise Howes, Sep 8, 1962)

I don’t know if any of Lewis’ schoolchildren ever took him up on the challenge, but the patterns and possibilities of Narnia transformed children’s literature forever.

In this little note to Ms. Howes, Lewis points her to The Last Battle. “I’ve left you plenty of hints,” he wrote, “especially where Jill Pole and the Unicorn are talking….” And there in ch. 8 we see Jill’s own Road to Emmaus:

“Oh, this is nice!” said Jill [to Jewel the Unicorn]. “Just walking along like this. I wish there could be more of this sort of adventure. It’s a pity there’s always so much happening in Narnia.”

There is no stranger in the road this time, just a little girl and a unicorn. But Jewel takes a moment to fill in a bit of the open spaces of Narnia that we have all wondered about:

But the Unicorn explained to her that she was quite mistaken. He said that the Sons and Daughters of Adam and Eve were brought out of their own strange world into Narnia only at times when Narnia was stirred and upset, but she mustn’t think it was always like that. In between their visits there were hundreds and thousands of years when peaceful King followed peaceful King till you could hardly remember their names or count their numbers, and there was really hardly anything to put into the History Books. And he went on to talk of old Queens and heroes whom she had never heard of. He spoke of Swanwhite the Queen who had lived before the days of the White Witch and the Great Winter, who was so beautiful that when she looked into any forest pool the reflection of her face shone out of the water like a star by night for a year and a day afterwards. He spoke of Moonwood the Hare who had such ears that he could sit by Caldron Pool under the thunder of the great waterfall and hear what men spoke in whispers at Cair Paravel. He told how King Gale, who was ninth in descent from Frank the first of all Kings, had sailed far away into the Eastern seas and delivered the Lone Islanders from a dragon and how, in return, they had given him the Lone Islands to be part of the royal lands of Narnia for ever. He talked of whole centuries in which all Narnia was so happy that notable dances and feasts, or at most tournaments, were the only things that could be remembered, and every day and week had been better than the last.

I don’t know about you, but when I hear of these other stories, the unwritten ones, I can mimic the words of Jesus disciples on that dusty Roman road so long ago:

“Didn’t our hearts burn within us as he talked with us on the road….”

Something very much like that happened to Jill as well:

And as [Jewel] went on, the picture of all those happy years, all the thousands of them, piled up in Jill’s mind till it was rather like looking down from a high hill on to a rich, lovely plain full of woods and waters and cornfields, which spread away and away till it got thin and misty from distance.

The terrain is so very different: the lush forest road of Narnia and the bare desert road of Palestine. And the substance of our curiosity is fed in much different ways in each story. The rough grain of the cross is substantially different than the finished wood of the wardrobe. One story made the other one possible.

Yet in each the hearts of the disciples are lifted as there is news that the sorrow they are experience is not the end of all stories. More than that, there are many stories in between, each of them important to the road they find themselves on this day.

“A Pilgrim in Narnia” is a blog project in reading and talking about the work of C.S. Lewis, J.R.R. Tolkien, and the worlds they touched. As a "Faith, Fantasy, and Fiction" blog, we cover topics like children’s literature, apologetics and philosophy, myths and mythology, fantasy, theology, cultural critique, art and writing. This blog includes my thoughts as I read through Lewis and Tolkien and reflect on my own life and culture. In this sense, I am a Pilgrim in Narnia--or Middle Earth, or Fairyland. I am often peeking inside of wardrobes, looking for magic bricks in urban alleys, or rooting through yard sale boxes for old rings. If something here captures your imagination, leave a comment, “like” a post, share with your friends, or sign up to receive Narnian Pilgrim posts in your email box. Brenton Dickieson is a father, husband, friend, university lecturer, and freelance writer from Prince Edward Island, Canada. You can follow him on Twitter, @BrentonDana.
View all posts by Brenton Dickieson →
This entry was posted in Memorable Quotes, Thoughtful Essays and tagged C.S. Lewis, children's literature, Jesus, Letters to Children, Narnia, pilgrimage, Road to Emmaus, The Last Battle, theology, Theology of Culture, writing. Bookmark the permalink.