This book is long. I mean, the “infinite” in Infinite Jest is approaching a new kind of literal meaning for me. My copy has 1079 pages. These are thick, full pages.

Infinite Jest is a bestseller as well as a cult classic. I don’t know if those two categories overlap much. I suspect that, like the Bible, there are far more copies in existence than actual readers. 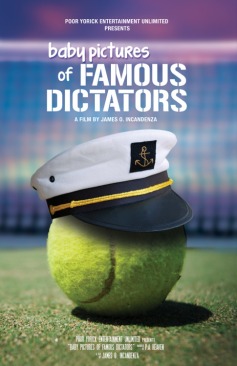 There are more than 1 million copies of this book in English.

Words: According to one count there 577,608 in Infinite Jest. This isn’t the longest novel in English, but close. That’s just a little shorter than the Lord of the Rings (all 6 books in the trilogy). It is almost twice as long a Stephen King’s or George R.R. Martin’s books. The key difference is that King and Martin have this thing they call a plot. There is a story, it moves forward toward a conclusion. I have no confirmation that this is happening in Infinite Jest.

There can be, like, 300,000 words between two scenes of a character’s narrative.

There are 20,584 unique words in Infinite Jest. Wallace has a huge vocabulary. To be fair, though, a great number of these are neologisms and hapex legomena. Ryan Compton’s “Infinite Jest by the numbers” breaks it all down to insane levels.

There are 12,143 different English words in the King James Bible.

It is best to watch a few episodes of M.A.S.H. before reading.

Learn French too, if you have time. 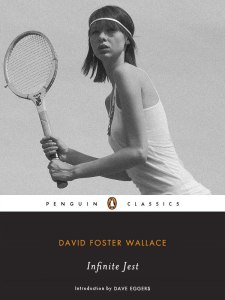 Filled with thousands of core facts, including encyclopedic treatments of death, addiction, practical chemistry, linguistics, languages, Québécois separatism, suicide, tennis, and physics, Wallace wrote this book without ever using the Internet. Not even once.

The endnotes are an integral part of the book and I just couldn’t handle them. I assume I am the lame one, but I only scan the footnotes.

The Audible listing for the footnotes comes in at 7 hrs and 44 mins.

The Audible listing for Infinite Jest—sans footnotes—is 55 hrs and 12 mins. That has to be about the highest value single credit deal on Audible.

Things that are about the same length as Infinite Jest: the Old Testament with Apocrypha; the complete Sherlock Holmes Stories; Atlas Shrugged by Ayn Rand (really a trilogy); 1Q84 (also like a trilogy); everything F. Scott Fitzgerald wrote, including published letters; Dixon & Torrey’s 90-essay The Fundamentals: A Testimony To The Truth; the 22 plays of Shakespeare that you can write down on a pad starting now.

On February 1st, 1996–the day Infinite Jest was published, The Communications Decency Act passed in the U.S. Congress.

That day, Wired magazine called Steve Jobs “The Next Insanely Great Thing.” Yes. Yes he was.

This: Revenue-Enhancing Subsidized TimeTM. Calendar years are sold to companies and renamed, such as “Year of the Yushityu 2007 Mimetic-Resolution-Cartridge-View-Motherboard-Easy-To-Install-Upgrade For Infernatron/InterLace TP Systems For Home, Office Or Mobile (sic).” That’s probably 2007. Most of the action in the novel takes place in the Year of the Depend Adult Undergarment (Y.D.A.U.).

Why I googled “Revenue-Enhancing Subsidized Time” for a picture, there were 382,000 hits.

Here is the picture: 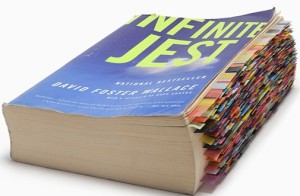 This is my favourite blog on Infinite Jest. Before starting the book, she describes one reader’s response to the book this way: “It was the tone usually reserved for the ex-lover who truly did a number on you, and it frightened me.” She read it anyway.

Here is the schedule I’m using at “Infinite Winter.” I have been 2 weeks behind the entire Infinite Jest reading challenge. #InfiniteWinter #fail

One compound word I found had 487 characters. I didn’t count the others.

I think my 1st year writing students use Infinite Jest as a model for paragraph formation.

Who is talking? I mean, I can hardly every figure out whose perspective is controlling my reading experience.

The acronyms mean something. I think.

Did Kurt Vonnegut, Jr. ever produce a literary child Margaret Atwood that was raised by Thomas Pynchon? Just wondering.

If there is not yet something called David Foster Wallace Studies in the Academy, there will be. It will probably be a Masters degree that no one can pass.

I think America is mentally ill. I don’t mean the individuals. I mean the whole culture.

This will make sense to readers of Infinite Jest:

Proper grammar is obviously for unpublished, uncult writers like me.

Could this book possibly be published today by a big publisher? I don’t think so. Partly, Infinite Jest is so 1996 I could have guessed the brand of underwear the author was wearing based on the first 20 pages. Partly, it is just too risky. The cost in editorial terms along would sink a small firm or gum up the machines of a long one. He could probably find an agent, but only luck (or providence, or some other force) would find both an agent and a publisher that would read it to the end, let alone publish it. But Wallace did find someone who was ecstatic about the book (Michael Pietsch at Little, Brown in the 90s) and who pushed it like mad on a post-Cold War/post-Kurt Cobain/postmodern public.

I love all the covers I’ve seen of Infinite Jest. I think the author hated them all. What’s with Canada? I mean, most American pop culture completely forgets the world’s 2nd largest landmass is a single nation that rests its chin on our shared 49th It occurs to me now that Americans might not know this is a running joke for Canadians (and no doubt others). When aliens attack or meteorites fall or evildoers strike, it is always on the American east or west coasts. The idea that a species intelligent enough to travel millions of light years across time and space to come and conquer the globe would begin in the world’s most fortified nation borders on the ridiculous. Aliens, you should begin in Canada. We are defended only by a handful of warplanes (now in the Middle East), and we largely fight our wars with goodwill and hope that Americans will help.

Besides, we are far too fat to do much actual fighting anymore.

Aliens err on this point. Except Superman. He landed in the American Heartland.

But David Foster Wallace knows about Canada. In fact, it is sort of an obsession. He builds it into the Experialist (i.e., the opposite of Imperialism) era of the United States, and it becomes an important feature under the Presidency of Johnny Gentle. More than just general Canadiana and the occasional mocking of our accent—there is that—historic tensions with French-speaking Quebec are heightened and entwined with the novel’s development.

I think this has to do with Wallace’s approach in general. I think all of this weirdness is about intentionally alienating the reader.

To match the matter at hand, this blog should be waaaaay longer. 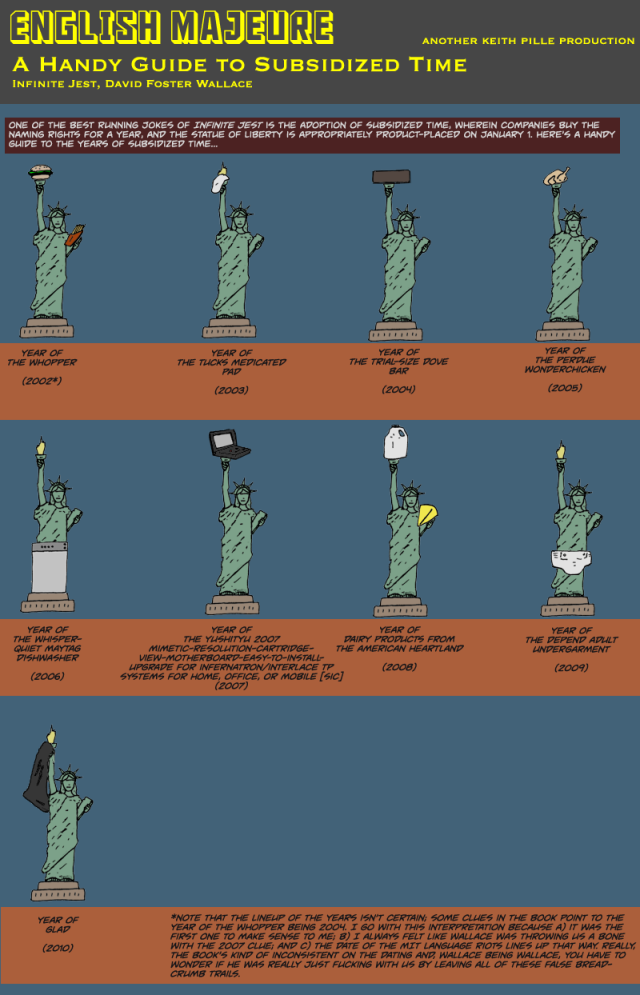 “A Pilgrim in Narnia” is a blog project in reading and talking about the work of C.S. Lewis, J.R.R. Tolkien, and the worlds they touched. As a "Faith, Fantasy, and Fiction" blog, we cover topics like children’s literature, apologetics and philosophy, myths and mythology, fantasy, theology, cultural critique, art and writing. This blog includes my thoughts as I read through Lewis and Tolkien and reflect on my own life and culture. In this sense, I am a Pilgrim in Narnia--or Middle Earth, or Fairyland. I am often peeking inside of wardrobes, looking for magic bricks in urban alleys, or rooting through yard sale boxes for old rings. If something here captures your imagination, leave a comment, “like” a post, share with your friends, or sign up to receive Narnian Pilgrim posts in your email box. Brenton Dickieson is a father, husband, friend, university lecturer, and freelance writer from Prince Edward Island, Canada. You can follow him on Twitter, @BrentonDana.
View all posts by Brenton Dickieson →
This entry was posted in Reflections and tagged 1Q84, aliens, Canada, David Foster Wallace, Harold Bloom, Infinite Jest, Infinite Winter, Superman. Bookmark the permalink.