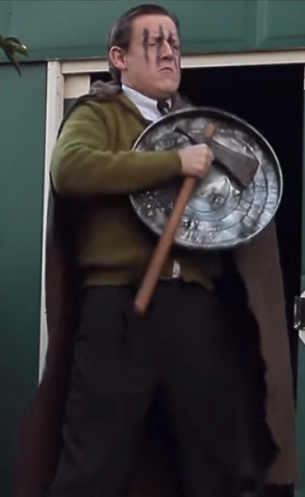 A reader tipped me off to this little piece. While documentaries on J.R.R. Tolkien abound, and there are adaptations of his fiction, there have been few who have attempted to capture the story of the Mythmaker himself on film.

Here is one, and a fairly recent project.

Directed by Nye Green, this indie film captures a few days in 1929 in the lives of the Inklings at Oxford. C.S. Lewis, in a supporting role, is on the edge of changing his thinking about faith and myth. At the same time, Tolkien is struggling with PTSD (shell shock) from his WWI experience. Two of the members of his pre-Inklings group, the Tea Club and Barrovian Society (TCBS)–his early friends and fellows on the writing path–have fallen to war. In his struggle to deal with survivor’s guilt and his inability to save his friends, characters from Tolkien’s Lost Tales and Middle Earth Legendarium start appearing in his waking reality to help him focus on his true integrative task: writing his myth for others to read.

The film includes the prewriting conversations of Lewis and Tolkien, a little piece of Addison’s Walk, and among snatches of dialogue from Tolkien’s work, a bit of the “Mythopoiea” poem that encapsulates so well Tolkien’s mythmaking project.

Not everyone loves low budget independent films. I quite liked this piece, though I have no idea if The Hobbit and all the rest was really any sort of dealing with the past. The character of Lewis is weak, lacking in any irony and serving only as a solid landing point for Tolkien’s struggle to get his bearings. Lewis is called “Jack” but Tolkien is called “John” (instead of “Tollers”), which leads me to suspect there needed to be more research done. Yet the film is filled with these great bursts of sheer geekiness that it has to have emerged from a strong Tolkien fanbase. Lewis remains a dim figure to many Tolkien fans, so perhaps that’s why his is dim in this piece.

Quibbles aside, I liked the character of Tolkien in this film. I don’t know why he sleeps in a different bedroom than his wife, and there were some minor pacing issues. But he captures a kind of imaginative quirkiness and mythopoeic passion that surely has to be part of Tolkien’s mental makeup–even if they were hidden within an Oxonian father shuffling around campus with parchments and examination papers stuffed under each arm.

“A Pilgrim in Narnia” is a blog project in reading and talking about the work of C.S. Lewis, J.R.R. Tolkien, and the worlds they touched. As a "Faith, Fantasy, and Fiction" blog, we cover topics like children’s literature, apologetics and philosophy, myths and mythology, fantasy, theology, cultural critique, art and writing. This blog includes my thoughts as I read through Lewis and Tolkien and reflect on my own life and culture. In this sense, I am a Pilgrim in Narnia--or Middle Earth, or Fairyland. I am often peeking inside of wardrobes, looking for magic bricks in urban alleys, or rooting through yard sale boxes for old rings. If something here captures your imagination, leave a comment, “like” a post, share with your friends, or sign up to receive Narnian Pilgrim posts in your email box. Brenton Dickieson is a father, husband, friend, university lecturer, and freelance writer from Prince Edward Island, Canada. You can follow him on Twitter, @BrentonDana.
View all posts by Brenton Dickieson →
This entry was posted in Feature Friday, News & Links and tagged Addison's Walk, C.S. Lewis, Inklings, J.R.R. Tolkien, Middle Earth, myth, mythopoiea, Oxford, PTSD, The Book of Lost Tales, The Hobbit, Tolkien's Road, WWI. Bookmark the permalink.