Readers of A Pilgrim in Narnia will know of my abiding interest in The Screwtape Letters. As the 75th anniversary of the first printing of the Letters is next Monday, we are taking a couple of weeks to celebrate this “positively diabolical” little book. Today we will feature an interview with William O’Flaherty. A digital kingmaker in the blogospheric realms, William has recently released C.S. Lewis Goes to Hell, a companion to the Letters with a study guide to help individuals and groups work through this great Christian resource. We are pleased that William has given us some of his time–when he isn’t interviewing C.S. Lewis scholars from around the world!

Brenton: C.S. Lewis has a broad and creative publishing history, including groundbreaking academic work and fantasy literature. What makes The Screwtape Letters stand out?

William: As your readers may know, this was Lewis’ first “claim to fame.” The Screwtape Letters came out almost ten years before the The Lion, the Witch and the Wardrobe was published and when it did it put him “on the map” so to speak. As the result of Screwtape he was featured on the cover of Time magazine three years before any of the Narnia series. When I mention this fact to people, I underscore it by imagining becoming famous for something else after being on the cover of such a respected magazine!

Now, that doesn’t answer your question, it just clarifies for those unaware of this book, the fact that it was viewed as something special when it was released back in 1942. So what makes it distinctive? The letters, in addition to being short and to the point, are very funny. You have a frustrated know-it-all senior demon instructing his incompetent nephew who is on his first assignment. But, as you read the letters you realize that the various advice given to mess with the unnamed patient either applies to you or someone you know.

For me there was also on some level the feeling that I was reading other people’s mail and I think Lewis was fully aware of how we all like to eavesdrop on other people’s business. So, he manages to indirectly teach us things by reading about the various means the devils might use to ruin someone else’s life. In fact, around the same time The Screwtape Letters came out someone commented about one of his other works that Lewis had “the rare gift of making righteousness readable.” Thus, in Screwtape you find a great read that also has the ability to teach you in an insightful way. 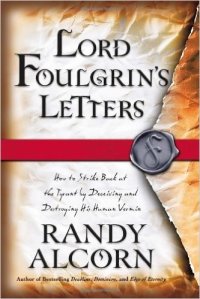 Brenton: I think we share an interest in Screwtape copycats—people who have written Screwtape-like letters to tackle ideas in a demonic form. We’ve each tried it ourselves. What has been the most unusual copycat that you have come upon?

William: Actually, while I’ve collected nearly all of those copycats, I’ve only read very few. So, I can’t really comment on “the most unusual.” However, in terms of enjoying a copycat, the one by Randy Alcorn stands out in my mind. I read Lord Foulgrin Letters when it first came out back in 2000. I liked the way he did the book, because they are not just letters, there are also short chapters between each that paints an even fuller picture of what is happening.

Brenton: What is the most challenging part of using The Screwtape Letters in a curriculum (whether as a course, a book study, or in a church setting)?

William: Even though it’s a short book it is also very dense…so, I think it is somewhat deceiving because of that fact. Therefore, in a way “the most challenging part” is that the book appears almost too simple. I believe it could take several much larger books to convey the spiritual truths that Lewis does in his short letters and the follow-up essay.

Additionally, I think almost in the opposite vein, it is actually too long for groups wanting to study it because the way our culture is. While I enjoy shorter studies on topics that are often just six weeks, there is no way to do more than barely scratch the surface of The Screwtape Letters by attempting to cover it in such a short time. In fact, I really struggled to even offer a suggested 13-week study in my book because I think the letters should be covered a week at a time and the follow-up essay shouldn’t be forgotten. Therefore, a major challenge I believe is to take the necessary time to really digest the book to yield the many rich truths. As a result of this I hope what I’ve done with my book will help people to dig out the almost endless lessons found in this classic work.

Brenton: Name three Screwtapian facts you have learned that you think readers will be unlikely to know about. 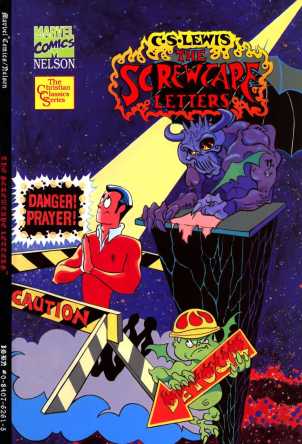 William: Your question is like asking a parent who has about a dozen children to name his favorite kid! After all, I do list sixty facts in one of my appendices in my book. What follows, however, are three especially worth noting:

Brenton: It looks like Narnia will be well read into the 21st century, and there is strong demand for his Christian essay books and Mere Christianity. Many of Lewis’ other books, however, are mostly read by literary historians, scholars of Spenser or Milton, classic SciFi lovers, and fans of C.S. Lewis and the Inklings. As the language of Screwtape is a bit older and the ideas a little strange, do you think Screwtape will have a broad or narrow appeal in the future?

William: That’s a tough call…in some ways Screwtape could stand to be updated; at least that’s what I’ve thought over the years. However, having done more intense reading the twelve months before doing the more serious work that went into creating my companion/study guide, I’m not so sure. Plus, when I first read the book over thirty years ago I wasn’t put off by not knowing most of the references Lewis makes to people I wasn’t familiar with or terms I didn’t know the meaning of.

William: That was a great find that you published! It’s funny, however, that I didn’t realize it wasn’t something known when I made a visit to the Wade Center around the same time you did and noticed that preface. I’ve never claimed to be a true Lewis scholar, so I haven’t concerned myself with a lot that falls into that category. Having said that, it is interesting that Lewis started out to connect Screwtape to what was at the time only the first book in the eventual trilogy on Ransom. I look forward to individuals like yourself providing greater insight into the ramifications.

Brenton: What surprised you most about making this guide?

William: Having read or listened to Screwtape at least thirty times before making a focused attempt to create my guide, I didn’t think I’d find anything new. After going over the book a little more than twice as much again (about 100 times in total)…the “hidden” theme of keeping things out (revealed in my third appendix) stands as the most surprising aspect. That is, in terms of what it actually means. When I did a talk at the Inklings Conference the first of April 2016 I expanded on what is just a listing in the book of the times that this theme is either mentioned directly or in passing. An edited version of that single talk is available as a podcast (Shining Light on Screwtape’s Darkest Secret) that readers can listen to hear me not only give the fuller context of the mention, but also what it means in our lives today.

Brenton: Who should buy this book?

William: I realize every author believes their book is for everyone, yet I can’t honestly say that is true for my book. Having said that, I believe my book can speak to a wide variety of readers. I designed it so a person who wants to do a casual reading of Screwtape can benefit from my book. That’s because I designed five questions for a “shorter” study of each letter that highlights major points. Then a more serious reading can be done by tackling the five additional questions (which is especially aimed for small groups). There are also suggested answers in the back of my book.

Another reason I believe an assortment of individuals will find the book useful is the first section, which is called a “Topical Glossary.” This is where I take the topics mentioned or addressed by Screwtape and make an encyclopedic-like entry to detail the places they are referenced. So, a person could read an entry and then check out in the letters where the subject is addressed, or read a letter and consult my book to learn if certain words can be found in other places.

While I could elaborate more, a final reason I think the casual or serious reader can both enjoy my book is because in addition to giving a short summary of the theme or themes in each letter, I also have a standalone section that gives an extended synopsis of them. That way those trying to remember the information on their own won’t get ahead of themselves, and ones wanting a quick reminder will have it.

In closing, I hope people will take the time to check out the preview of the book found via Amazon or visit ScrewtapeCompanion.com where they can download a free 20 page PDF sample to see how my book is more comprehensive than any previous aid to The Screwtape Letters.

Make sure you check out William’s companion site to C.S. Lewis Goes to Hell. You can also get a direct link to a 20-page PDF sample here.

“A Pilgrim in Narnia” is a blog project in reading and talking about the work of C.S. Lewis, J.R.R. Tolkien, and the worlds they touched. As a "Faith, Fantasy, and Fiction" blog, we cover topics like children’s literature, apologetics and philosophy, myths and mythology, fantasy, theology, cultural critique, art and writing. This blog includes my thoughts as I read through Lewis and Tolkien and reflect on my own life and culture. In this sense, I am a Pilgrim in Narnia--or Middle Earth, or Fairyland. I am often peeking inside of wardrobes, looking for magic bricks in urban alleys, or rooting through yard sale boxes for old rings. If something here captures your imagination, leave a comment, “like” a post, share with your friends, or sign up to receive Narnian Pilgrim posts in your email box. Brenton Dickieson is a father, husband, friend, university lecturer, and freelance writer from Prince Edward Island, Canada. You can follow him on Twitter, @BrentonDana.
View all posts by Brenton Dickieson →
This entry was posted in Fictional Worlds, Memorable Quotes, News & Links and tagged books, C.S. Lewis, C.S. Lewis Goes to Hell, hell, lion the witch and the wardrobe, Narnia, Screwtape, The Screwtape Letters, theology, William O'Flaherty, writing. Bookmark the permalink.