On the Alberta Wildfires

What the news clips and youtube videos cannot capture for us is the smell.

I watched my own home burn, my childhood home disappear to flames–and with it half of my family. There is heat that makes your skin pucker, and the gut-curdling contrast of bright light flickering on dark sky. There is noise, a roaring, insatiable hunger, a million explosions of moisture finding its way back to the sky. When windows explode from the internal combustion of a family’s home, you cannot hear the tinkling of glass. Wood snaps in a raging fire. The creations of man creak and grown under the weight of their own efficiency.

But it was the smell of the fire that stayed with me for days. All that day, as the sun rose on frozen earth and the shell what was my home steamed bright on a dull sky, I reeked of baked wood and noxious fumes. Plastic melts too in a fire, and you can smell it for days. Asphalt releases its fumes. The layers of paint peel back to reveal their poisonous pasts. Toys, once loved and now lost, melt into puddles of the past.

And as I smelled all of this on my skin and hair and clothes, I could not help wondering if in it was the smell of flesh and fur.

And there was the loss. The aching loss of father and brother. The foreverness in the stench of my own polluted skin terrified me. My heart pounded in my chest for hours. When I finally fell asleep, I never wanted to wake again. I missed them before I knew for sure they were gone. I miss them still.

What reality are Albertans waking up to this morning? What will they see along the dull skyline? Will it be a ranging fire? Or the shells of lost communities? Or a line of cars with weary refugees coming along a smoldering highway? Or will there be rain? 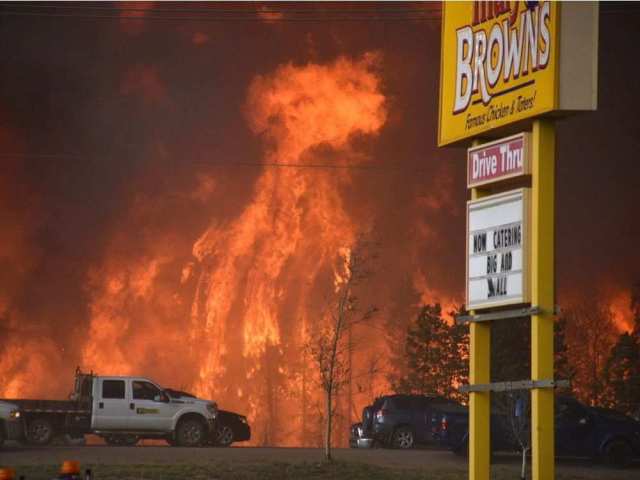 The cost is high. Financially speaking, it would be cheaper to run a small province or state for a year than fight this fire and rebuild. A population larger than 18 of America’s smallest state capitals is on the move, refugees of heat and flame and smoke. The fire rages on more than 200,000 acres–larger than many small cities, and a larger piece of land than 67 of the world’s nations. It is cutting the province in half, dividing families and taxing refugee centres and government resources. The boreal forest and prairies are on fire, and if it does not rain … well, no one can stop it until it rains.

And, friends, this is the wettest time of year for the prairies. The summer is just beginning.

We often forget this as North Americans. I have lived on the prairie, and then I only had a dim sense of how dangerous it really is to live there. Not just in Palliser’s Triangle or in the rugged north–all the prairies have been for all of human settlement a place where creation rises up to test the strength of the settlers. There is a kinship between prairie states and provinces that most of us know nothing of. If Montana firefighters are not in northern Alberta, they are doubtless on their way. It is the way things work where the high plains rush into the Rocky Mountains, this grand, bare, dry field basin of what was once an ocean floor, where great islands of ice rolled across the stone.

Somehow, in all of that, life has survived on the prairies.

Doubtless it will survive still, but these are hard times. As we all come to grips with tragedies of this size, I would encourage you to avoid the people who want to make political hay on these moments. Granted, the media is sure to set them up. I would encourage you to ignore those who want to take the stories of those fleeing their homes and use it as ammunition in the fight against climate change, or as clarion call for those frustrated with the Alberta government, or as a reminder of God’s judgment on humanity for abortion or eating meat. Those are the bullies who only picked on the little kids on the playground. They choke the life out of any love. Their actions betray their own hatred for humanity, and threaten to discredit the movements they claim they love.

People did this to me, not long after I buried my father and my little baby brother. There were people who reminded me of my father’s failings, or of how God will punish those who sin. These are folk who think that acid is the best treatment for an open wound.

What will Albertans see this morning?

“A Pilgrim in Narnia” is a blog project in reading and talking about the work of C.S. Lewis, J.R.R. Tolkien, and the worlds they touched. As a "Faith, Fantasy, and Fiction" blog, we cover topics like children’s literature, apologetics and philosophy, myths and mythology, fantasy, theology, cultural critique, art and writing. This blog includes my thoughts as I read through Lewis and Tolkien and reflect on my own life and culture. In this sense, I am a Pilgrim in Narnia--or Middle Earth, or Fairyland. I am often peeking inside of wardrobes, looking for magic bricks in urban alleys, or rooting through yard sale boxes for old rings. If something here captures your imagination, leave a comment, “like” a post, share with your friends, or sign up to receive Narnian Pilgrim posts in your email box. Brenton Dickieson is a father, husband, friend, university lecturer, and freelance writer from Prince Edward Island, Canada. You can follow him on Twitter, @BrentonDana.
View all posts by Brenton Dickieson →
This entry was posted in Reflections and tagged Alberta Wildfire, charity, fire, Fort McMurray FIre, refugees. Bookmark the permalink.

14 Responses to On the Alberta Wildfires