Eve of Perelandra, by James Lewicki 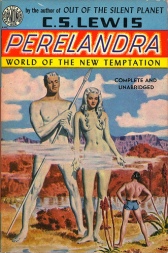 I have complained of the cover art of C.S. Lewis’ Out of the Silent Planet in my blog, “Worst Book Description Ever.” While I like some of the crazy science fiction art of the period, this cover of Perelandra on the right is painfully bad. Giant green bodied/pale faced naked aliens hovering above with wispy cloud right at their privates, while a nevernude Ransom stands defiantly against them in his superman pose. Really, super tight jean shorts? If these are the Adam and Eve of Perelandra, why does the Lord of that world have a spear? And look at Eve’s face: Does she look more like the innocent child-mother of a fresh new world, or the girl in high school who wouldn’t talk to you? If it is Mars and Venus, it explains the spear. But why is he green? And why Caucasian heads on green-hued bodies?

To their credit, they do keep in great shape. They must work out.

There is much to mock in this book cover, but it is challenging to imagine how we might capture the images of the Adam and Eve of Perelandra. They are green and naked, innocent and lordly, beautiful and yet not sexually alluring, implicated with their natural world yet gods in it. It was probably wise that, when they produced an opera of Perelandra, they used “The Birth of Venus” by Sandro Botticelli (late 15th c.) for their main image. 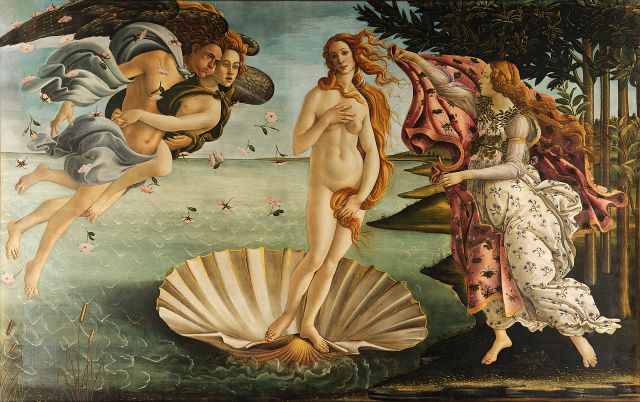 While not all attempts to capture Perelandra have been successful, there is one artist who has made an attempt that I think is worth applauding. In the first edition of Horizon journal (May 1959), within an article by Edmund Fuller called, “The Christian Spaceman: C.S. Lewis,” there is also a painting by James Lewicki. 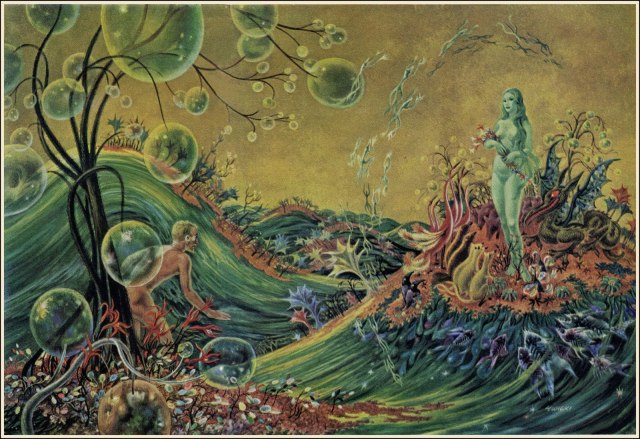 It is very much a piece of the period, but you can tell that Lewicki had actually taken the time to read Perelandra. Though a tad too literal, Ransom is the Piebald Man, tanned on one side by his space voyage. He is naked and disoriented, caught on a floating island away from the only human he has yet seen. Lewicki has made an attempt to capture some of the vegetation, including the bubble trees–a “fruit” that provides refreshment and strength to Ransom in his visit to Venus. And there is the lady, a bit indistinct in the distance, but unashamed as she gathers flowers in her great, global garden.

If you still feel a little bit unsatisfied by the painting, you should know that Lewis predicted you would be.

She was standing a few yards away, motionless but not apparently disengaged—doing something with her mind, perhaps even with her muscles, that he did not understand. It was the first time he had looked steadily at her, himself unobserved, and she seemed more strange to him than before. There was no category in the terrestrial mind which would fit her. Opposites met in her and were fused in a fashion for which we have no images. One way of putting it would be to say that neither our sacred nor our profane art could make her portrait. Beautiful, naked, shameless, young—she was obviously a goddess: but then the face, the face so calm that it escaped insipidity by the very concentration of its mildness, the face that was like the sudden coldness and stillness of a church when we enter it from a hot street—that made her a Madonna. The alert, inner silence which looked out from those eyes overawed him; yet at any moment she might laugh like a child, or run like Artemis or dance like a Maenad. All this against the golden sky which looked as if it were only an arm’s length above her head (Perelandra ch. 5).

We see how it was, visually speaking, an impossible task. Still, I am grateful to James Lewicki for attempting–especially since so many have done it so badly.

Someone has recoloured and focussed the pieces, which I think enhances what we see–even if the colours are a bit brash (see the tiles below). As I have just finished rereading Perelandra, I found the painting helped me see the world of Perelandra in a subtly different way. 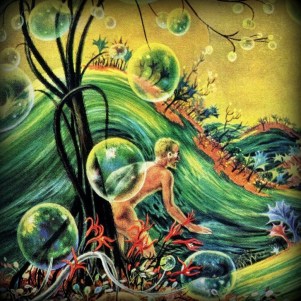 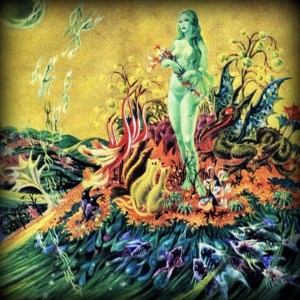 “A Pilgrim in Narnia” is a blog project in reading and talking about the work of C.S. Lewis, J.R.R. Tolkien, and the worlds they touched. As a "Faith, Fantasy, and Fiction" blog, we cover topics like children’s literature, apologetics and philosophy, myths and mythology, fantasy, theology, cultural critique, art and writing. This blog includes my thoughts as I read through Lewis and Tolkien and reflect on my own life and culture. In this sense, I am a Pilgrim in Narnia--or Middle Earth, or Fairyland. I am often peeking inside of wardrobes, looking for magic bricks in urban alleys, or rooting through yard sale boxes for old rings. If something here captures your imagination, leave a comment, “like” a post, share with your friends, or sign up to receive Narnian Pilgrim posts in your email box. Brenton Dickieson is a father, husband, friend, university lecturer, and freelance writer from Prince Edward Island, Canada. You can follow him on Twitter, @BrentonDana.
View all posts by Brenton Dickieson →
This entry was posted in News & Links and tagged Aphrodite, art, Botticelli, C.S. Lewis, mythology, opera, Out of the Silent Planet, Perelandra, Ransom Trilogy, Venus. Bookmark the permalink.

50 Responses to Eve of Perelandra, by James Lewicki