Posted on September 6, 2016 by Brenton Dickieson

Back in the day, C.S. Lewis thought that industry and suburban sprawl was ruining Oxford. Decades later, industry has slid into the urban background and the suburbs are here to stay. If I had to say anything at all, I would say that the crowds make this magical city just a little less transcendent. Tourists crowd Magdalen Street, Cornmarket, and the High Street. But Broad Street is the worst. They gather in handfuls on the steps of the Bodleian, but they pack them into the next block over.

When planning the trip, tourists from all over the world say they are coming to Oxford to experience the dreaming spires, the medieval to modern architecture, the cobblestones and colleges. Really, though, they are coming for the merchandise. The trinket shops overflow with travelers trying to find something that reminds them of the stone seat of Western knowledge, the birthplace of English learning, the jewel of quadrangular and Gothic architecture, the seedbed of religious transformation. They need something, you know, that captures all of that awesomeness. Like a magnet. Or a t-shirt.

In the two years since I last visited Oxford, the store windows in these memorabilia shops have changed. Once exclusively dedicated to college clothing and postcards, now they are increasingly filled with Harry Potter paraphernalia. You can buy a wand for between £3 and £40. I can’t tell you which is the best deal: it is the trinket that chooses the tourist, not the other way around. You can get a golden snitch (doesn’t work), or a Marauder’s Map (doesn’t work), or a Wizard’s Chess set (cool figurines, but doesn’t work). Perhaps I’m too much of a believer in magic to settle for Taiwanese factory versions, but it all seems a bit pale. 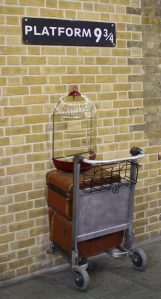 Except for the Harry Potter store at King’s Cross Station—next to a clever Platform 9¾ display—there is more Pottericity in Oxford than even in London. As I just happened to have started rereading the series–trying to keep ahead of my niece, who is a reading fiend–so I was curious about why Oxford has a touch of Pottermania.

It could be that not all this local Potter merchandise is 100% approved by the Ministry of Magic’s trademark lawyers. Oxford provides enough distance, perhaps, from the Ministry’s headquarters in London.

It may be because parts of the movie were filmed here. The infirmary where Harry’s bones grow back is the Divinity School at the Bodleian (I get in because I have the magic Bodleian reader’s card). I suppose there might be a Harry Potter tour of Oxford, but I haven’t seen it. Yet.

Beyond those simpler reasons, I think partly it’s that Hogwarts School of Witchcraft and Wizardry makes sense here in Oxford. North American readers, and perhaps British school kids at the non-posh schools, may find Hogwarts quaint with its houses, prefects, dining halls, gowns, dusty libraries, gargoyles, and collegiate integration of arts and sciences. In Oxford, however, all those things are still a reality. Professors still lecture, from time to time, in their monastic gowns. Students living in halls will dine at the high table—the same tables where the great writers, scientists, and politicians of history have whispered to friends their plans for iconic literature, groundbreaking discoveries, and totalitarian rule. The history of Hogwarts rhymes with the memory of Oxford.

I must admit, when I see the Hogwarts Crest on a shield hanging in a window, there really is something Harry Potterish about Oxford. I think it has to do with the past—our perceived history of England and Europe. While most people lived and died in the mundane moments of farms and funerals, our hearts connect with the high moments of British history. From the Celts to Roman rule, into the Middle Ages and towards the Renaissance, England is rich with story, art, architecture, law, literature, symbol, myth, and religion. And Oxford is very much a place that captures this history. At any moment in the City Centre you might cast your eye upon a Roman stone, a Norman wall, a Medieval college, or a 17th century cathedral. I don’t know why people go to the museum here in Oxford. The streets and walls and towers are the museum.

Don’t you think it’s true that to walk through the red brick wall of Platform 9¾ is to walk into the past? It seems to me that J.K. Rowling does a marvelous job of stretching history into the present in her work. Oxford is so old we don’t know exactly when the first colleges were formed. Hogwarts is formed even before Oxford, deep in the middle ages, long before England’s so-called golden era that has given us our scientific attitude and desire for technological advancement. We enter Oxford or Hogwarts, and technology slips away. At Hogwarts we are left with coal-fuelled trains, wind-swept castles, ancient libraries, candlelight, and stone stairways (albeit, ones that are bit tricky to pin down). 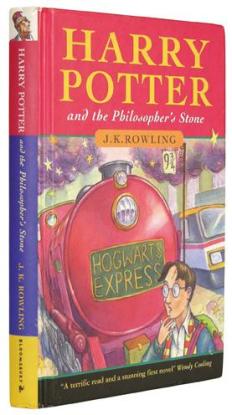 I think that Oxford and Hogwarts tap into something our souls yearn for, so I’m not surprised to see that Oxford is a kind of portkey into the magic of Harry Potter—even if the Potter experience itself is somewhat forced.

You can probably see that I have fallen in love with Oxford. I can’t help it. Its magic is different than Harry Potter’s, and in the midst of all these beautiful, well-read, well-dressed scholars, I feel like a great old lump of a muggle. But it is an invigorating place to read The Philosopher’s Stone once again. Indeed, I think this town will be hard to leave when my work is done.

Perhaps it’s true that it is Oxford that chooses the scholar, Harry.

Written at the back of the Lamb and the Flag, an Oxford pub where the Inklings met for a short period when they were boycotting the Eagle and Child.

“A Pilgrim in Narnia” is a blog project in reading and talking about the work of C.S. Lewis, J.R.R. Tolkien, and the worlds they touched. As a "Faith, Fantasy, and Fiction" blog, we cover topics like children’s literature, apologetics and philosophy, myths and mythology, fantasy, theology, cultural critique, art and writing. This blog includes my thoughts as I read through Lewis and Tolkien and reflect on my own life and culture. In this sense, I am a Pilgrim in Narnia--or Middle Earth, or Fairyland. I am often peeking inside of wardrobes, looking for magic bricks in urban alleys, or rooting through yard sale boxes for old rings. If something here captures your imagination, leave a comment, “like” a post, share with your friends, or sign up to receive Narnian Pilgrim posts in your email box. Brenton Dickieson is a father, husband, friend, university lecturer, and freelance writer from Prince Edward Island, Canada. You can follow him on Twitter, @BrentonDana.
View all posts by Brenton Dickieson →
This entry was posted in Reflections and tagged C.S. Lewis, Harry Potter, Harry Potter and the Philosopher's Stone, History, Hogwarts, medieval, Oxford, The Eagle and Child, the Lamb and the Flag. Bookmark the permalink.