Posted on October 26, 2016 by Brenton Dickieson

Adam Mattern works as a mild-mannered data analyst for a large networking company and is currently studying at Signum University for a M.A. in Language & Literature (concentration in Classical, Medieval & Renaissance Literature). He has love of pop geek-culture, an enthusiasm for literature, and a desire to study the intersection of orthopraxy and theology. He and his wife live in Bloomington, Indiana.

This is the first guest blog in my fall Signum Series. See my intro to Mythgard Academy and the upcoming video-chat on Stranger Things.

I work for a networking company, and my day-to-day tasks typically revolve around IT related tasks and data analysis. So when I was asked to participate in hiring and training a number of individuals for a new team, I quickly found that I was out of my element.

Having now completed hiring and training, I’m fielding daily questions and complaints from the team about tasks assigned to them and desires to work on other new and exciting projects. I’ve been tempted to chalk up these conversations as millennial adjustments but that seems a bit too dismissive. Many of these members are half my age, and trying to square my perspective with theirs often forces me to put into words my worldview about what we might call vocation.

Born and raised in the Cleveland, OH area, it probably shouldn’t be a surprise that when asked to identify modern foundational stories that inform a worldview, that the Superman mythos readily leaps to mind.  I probably spent just as much time imitating the exploits of the Man of Steel in costume as I did dressed as a “California Highway Patrol” officer or M*A*S*H surgeon combined.

Taking flight before an afternoon nap

If any fictional character has had to struggle with work-life balance and vocation, it would have to be our pal Kal-El. And being a child of the 80’s, one of the greatest contributors to that mythos is Richard Donner’s 1978 film, Superman.

Superman is a classic “origin story”, and good origin stories have to address questions about the mission and motivation of the hero and how he deals with the consequences of these actions. These choices and consequences can cause both internal and external dramatic tension and test the hero’s character.

Borrowing from some strong religious and mythic traditions, the infant Kal-El is sent to earth with dual purpose. In an act of love, which C.S. Lewis calls storge,  Kal-El’s parents, Jor-El and Lara, willingly set aside their own lives to provide a way for their son to survive. There is a specific reason that Jor-El sends him to earth and this vocation is later revealed to Kal-El, now called Clark, as he comes of age. Concerning humanity, he explains:

“They can be a great people… they wish to be. They only lack the light to show the way. For this reason above all, their capacity for good, I have sent them you”.

From Jor-El’s perspective, his son’s mission is to be a light for humankind, and this shows a certain care for humanity itself, a race of beings alien to the Kryptonians. Donner is playing another familiar religious string, as he sends his son to live amongst mortals as an act of agape love towards them. He’s not sending them a ruler or soldier, but a guiding light of hope to inspire. 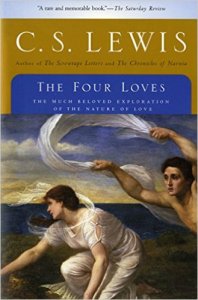 This has begun to tie some strands together for me, as I realize that a healthy vocation doesn’t exist in a vacuum, but exists for the benefit of both the individual and also the greater community that it is practiced in. I hinted at it earlier, but there’s definitely some interaction between C.S. Lewis’s The Four Loves and how one defines his or her vocation.

Our hero himself seems to be standing in multiple roles to the extent of taking on different personas. To his biological mother and father, he is Kal-El, the Last Son of Krypton who holds a special heritage and birthright. To his adoptive parents, John and Martha, he is Clark Kent, a rather special boy being raised on a farm in Kansas. His friends know him as a very different sort of Clark Kent, the good-natured, optimistic, mild-mannered Clark Kent; a good friend (phileo) to Jimmy Olsen and perpetually “friend-zoned” by Lois Lane. His alter-ego Superman, on the other hand, is the source of hope to the city of Metropolis, and the love interest (eros) of Lois Lane.

This multiple-nature of Clark/Superman is where his vocation starts to get complicated, and although most of us aren’t required to use secret identities, we do fit roles that could be identified as alter egos in our daily lives. Just as Superman unfurls the red cape and bears the “S” emblem when called into action, many of us don our own uniforms when we head to the office, hospital, or service calls. Anyone who has ever worked customer service understands the need for swapping personas to assist others. And who among us doesn’t adjust their language, manners, or topics of conversation among co-workers or fellow students as opposed to what is practiced at home? Our shifts in roles can be just as complicated as Clark’s case, just not as overt. 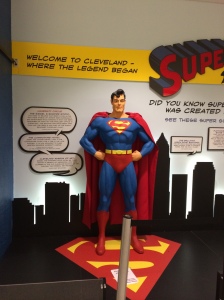 Travelers exiting the Cleveland Hopkins Airport are first greeted by a statue of The Man of Tomorrow.

As a note of comparison, we could look at the villain of this film, Lex Luthor, for similar features. Lex’s one potential “friendly” relationship (phileo) is with the rather slow-witted and bumbling Otis, whom Lex consistently pours out his frustration whenever anything goes amiss. His love life (eros) fairs no better. Miss Teschmacher, Lex’s love interest, does not seem to have her love reciprocated in any tangible way and when it is discovered a missile is mistakenly targeted at the city in which her mother lives, Lex seems to dismiss it as unimportant. The few people that he lets in his life have little value to him, except to stroke his ego.

His “vocation” as he is constantly reminding everyone, is to carry out the crime of the century and to prove that he is the world’s greatest criminal mind. Unlike other iterations of Lex Luthor, this one has no public persona, and he exists purely as a criminal in hiding. His “crime of the century” is centered on developing valueless property and dropping part of California into the Pacific. I think we can be pretty certain that this isn’t an act of agape. In fact, it doesn’t seem that any of his actions are born out of any of Lewis’s four loves.

Superpowers aside, the primary difference between Lex’s vocation and Clark/Superman’s vocation is love. Lex only looks to serve himself, but Clark’s is guided by love. In and out of costume, Clark’s different roles are still all tied to one of the principles of his vocation, that is helping people. Whether that is rescuing a kitten from a tree, catching a speeding bullet from a mugger on the sly, or sending half his paycheck to his grey-haired mother, he’s guided to act out of his love (agape, storge, philia, and even eros) for others. 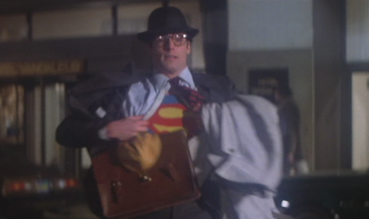 As I have listened to my millennial co-workers ask questions about what they are working on, I have started to understand that it isn’t an issue of someone believing themselves too good for a task put before them, but a desire to be contributing to something significant, a sense of purpose, and to make a difference. It seems to make less sense to millennials to compartmentalize their lives as many of us elder generations may have, and they are still trying to find their vocation and affirm their choices in life in order to be their true, authentic selves, regardless of the situation.

I can’t say that I’ve got the one right answer to their questions, but they have started to understand that regardless of what “costume they’re wearing”, their roles, like Clark Kent and Superman, belong to the same person. Navigating the complex interplay between vocation, life, family, career, education, etc. is complex, but their first step is to be guided by a desire to contribute to the greater community in all that they do, and not focus their gifts only on self. If we could all get that down, we’d truly be living among a group of super friends.

“A Pilgrim in Narnia” is a blog project in reading and talking about the work of C.S. Lewis, J.R.R. Tolkien, and the worlds they touched. As a "Faith, Fantasy, and Fiction" blog, we cover topics like children’s literature, apologetics and philosophy, myths and mythology, fantasy, theology, cultural critique, art and writing. This blog includes my thoughts as I read through Lewis and Tolkien and reflect on my own life and culture. In this sense, I am a Pilgrim in Narnia--or Middle Earth, or Fairyland. I am often peeking inside of wardrobes, looking for magic bricks in urban alleys, or rooting through yard sale boxes for old rings. If something here captures your imagination, leave a comment, “like” a post, share with your friends, or sign up to receive Narnian Pilgrim posts in your email box. Brenton Dickieson is a father, husband, friend, university lecturer, and freelance writer from Prince Edward Island, Canada. You can follow him on Twitter, @BrentonDana.
View all posts by Brenton Dickieson →
This entry was posted in Fictional Worlds, Guest Blogs and tagged C.S. Lewis, film adaptation, film criticism, MASH, Millennials, myth, Mythgard Academy, Richard Donner, Signum University, Stranger Things, Superman, The Four Loves, vocation, worldview. Bookmark the permalink.