Today is my 20th anniversary! Our house this morning was not a La La Land set, but filled the mundane tasks of laundry, breakfast, and off to school. As much as I would expect all the world to break out in celebration, jazz hands at the Dickieson home were set to tying shoes and packing lunchboxes. Still, I wanted to write a little note of celebration.

20 years. That means Kerry and I were married in a previous century, the 1900s. Kids can call that “olden times” without irony. When we were married, we used telephones to make phone calls, you had to watch television one episode at a time, and we still had hope for rock music. We are married longer than my parents even knew each other. In just a few months I’ll have been married more than half my life. All told we have been together for 23 years, 4 months, and 6 days. 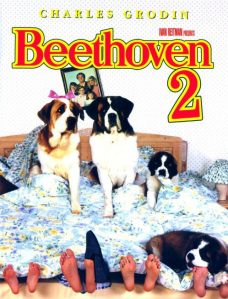 On that night, January 3rd, 1993, I was terrified to ask Kerry out. Finally, after encouragement from friends, I called her from a pay phone. A pay phone! I tucked my hair up in a ponytail, found a relatively clean shirt on the floor, and picked her up in my 1985 VW Golf. Knowing what I know about women now, it was perhaps unjust of my to call her a half-hour before I picked her up. Still, she said yes.

Our first date was a safe bet: a movie. Unfortunately, we went to Beethoven 2, which is twice as lame as the VHS tape cover suggests. This is the least epic of all films to begin an epic relationship, and I have shame.

Still, Kerry’s forgiveness was great. We went on a second date: Sister Act 2, with friends, and only moderately lame. On our third date we hopped in the car and I said I would take her to Toronto. “Okay,” she said doubtfully, knowing it was a city more than a 1000 miles away. I boldly drove her to Toronto, but not the fake capital of Canada. I took her to Toronto, PEI, population 47, a single paved road intersecting a red dirt road a few miles from Anne’s Green Gables.

That night, Kerry kissed me, and to this day tries to deny that is our first kiss on some sort of technicality. 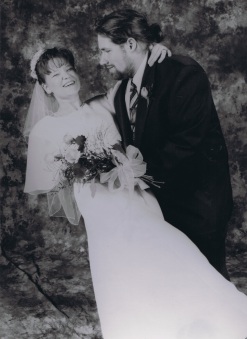 We were married on May 9, 1997 in New Glasgow, PEI, at the church where my parents were married. I realize now we threw a terrible party, but our friends and family were generous enough to enjoy it. Opening the mic to best wishes at our reception is a mistake in a family like mine with its gift of gab. But it garnered us a rendition of “When I’m 64” from Uncle Everett and a punk version of “Brown-Eyed Girl” by some of my youth group students (now captains of industry). Kerry’s eyes are hazel, but it is still one of my favourite covers.

It snowed the day after we were married. As we drove that week toward Florida on our honeymoon, we watched the seasons change along the East Coast. It is hard not to stay in Virginia forever in May. I look back enviously on a three-week honeymoon. We would use three weeks well now. We’d probably clean the garage.

As dreamy-eyed as we all are in our early stages of love, as we learn in La La Land! life has a settledness to it that is hard to imagine at the altar. I don’t remember our ceremony much—we might have that on Beta somewhere—but I know we promised to love through all the great difficulties of life. Thinking of our wedding party, there is 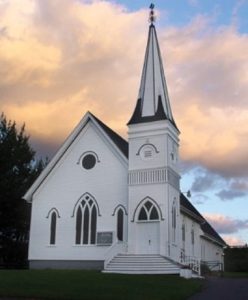 Thinking of our wedding party, there is loss. Kerry’s sister passed away not long after we were married. Also gone from our lives since we started dating are all our grandparents, a cousin, and most recently my mother. Some friendships have faded from that photo as well. We have suffered loss, and also great disappointment. We were together as we moved across this continent, to another continent, back to this one and then all the way across to home again. We failed in business. We lost a child that was never ours. Dreams have crumbled. And we have felt the strain of poverty move from months to years, and then to a decade.

Surprisingly, it is in none of these great valleys that marriage has been a struggle that made us worry. Is it just me, or is the time between the times the most difficult? The everydayness of Monday to Monday, the lunchboxes and parenting choices and paperwork of family life—these are the things that seem to wear on us the most. I wonder if marriage vows should supplement “for richer and poorer, in sickness and in health,” with, “and when the payment is due, the door handle is broken, and when we can’t decide what to do about our children.” Fidelity for us does not fail in the starburst moments, but fades in the times in between.

Without knowing exactly how to explain it, perhaps I saw this principle early on. Kerry and I have lived closely together for long periods of time, often apart from others. We are partners and friends and enjoy our time together. For one season, though, we were apart. I was working in Asia and Kerry in Vancouver. Reading the Odyssey, I recognized that so many readers forget the sheer length of time that Odysseus was away from his beloved. Time moved on, and what heroics meant changed its meaning as Odysseus fought through his wandering curse.

In that space, thinking of marriage as odyssey, as journey, I wrote this poem. I have never published it because I think it lacks poetic greatness, but it is the only poem I have ever written or Kerry. And it says more deeply, even in its childish, clumsy poesy, that I see our life together as a life, and for life. It is also my way of saying that the heroes and heroisms in stories don’t always look like what they seem.

I love you Kerry. Here’s to the next 20 years! Also, I took chicken out for supper and hung the whites. Happy anniversary!

Remember, when we were young
We drank of youth and youth-fullness
Think how you blushed in my arms
And we cried in failure’s earnest sight
And shared joy in failure’s failing
When the future’s hope loomed large and near
And love’s true kiss held eternity
I lifted you above the storm, and still
You carried me

Since, I have climbed the mountain’s heights
And conquered the ocean’s watery grave
I have led armies of the living God
And sheltered lambs in the valley’s shade
Felled giants’ hands at your feet
And challenged Intelligent’s delight
I resisted Sirens’ luring glare
And drank poison from a wounded heel, and still
You carry me

True, I will grow old
And in growing failing comes
Mountains will loom large above
And waters rest on foreign shores
Pilgrims’ ways will falter soon
And enemies will prosper
My Sight will dim in Athena’s glade
And doubt gather in my throat, and still
You’ll carry me

“A Pilgrim in Narnia” is a blog project in reading and talking about the work of C.S. Lewis, J.R.R. Tolkien, and the worlds they touched. As a "Faith, Fantasy, and Fiction" blog, we cover topics like children’s literature, apologetics and philosophy, myths and mythology, fantasy, theology, cultural critique, art and writing. This blog includes my thoughts as I read through Lewis and Tolkien and reflect on my own life and culture. In this sense, I am a Pilgrim in Narnia--or Middle Earth, or Fairyland. I am often peeking inside of wardrobes, looking for magic bricks in urban alleys, or rooting through yard sale boxes for old rings. If something here captures your imagination, leave a comment, “like” a post, share with your friends, or sign up to receive Narnian Pilgrim posts in your email box. Brenton Dickieson is a father, husband, friend, university lecturer, and freelance writer from Prince Edward Island, Canada. You can follow him on Twitter, @BrentonDana.
View all posts by Brenton Dickieson →
This entry was posted in Reflections and tagged Anne of Green Gables, Homer, La La Land!, love, marriage, Odyssey, Prince Edward Island, Sister Act. Bookmark the permalink.