The Problem of Good: Thinking about God and Evil with “The Giver”

One of the great questions that fixes the attention of thinkers in our generation about the existence of God is the Problem of Evil. The argument is so simple it is almost sublime. I summarize the argument here in this Prezi (if it doesn’t work on your screen, click here):

Usually, God is defined in these three key ways:

Granted these three things, we are left with what I call the Omnitrilemma:

Granted that God knows evil will happen—even I know that!—and is able to stop the evil, why might God not be willing to? This is the problem of evil? As C.S. Lewis put it:

“If God were good, He would wish to make His creatures perfectly happy, and if God were almighty He would be able to do what He wished. But the creatures are not happy. Therefore God lacks either goodness, or power, or both.” The Problem of Pain, 16.

In teaching, I’ve discovered that few students have problems grasping this logic. Philosophers can make it more precise, but the steps are pretty clear. Even people who believe in God can appreciate the logic as it sits. Beyond the intellectual steps, we feel the contradiction of a good, strong God who created a world with such pain. I push the point home in class by listing the most deadly disasters of history: storms, wars, disease, and childbirth. But anyone who has held a dying child, or has felt lost in the fog of depression, or has felt their dreams slip away knows that something isn’t right.

The reverse logic swings the pendulum the other way. What would a world without evil look like? C.S. Lewis anticipates this question:

“We can, perhaps, conceive of a world in which God corrected the results of this abuse of free will by His creatures at every moment: so that a wooden beam became soft as grass when it was used as a weapon, and the air refused to obey me if I attempted to set up in it the sound-waves that carry lies or insults. But such a world would be one in which wrong actions were impossible, and in which, therefore, freedom of the will would be void” (C.S. Lewis, The Problem of Pain, 24).

A world where evil was not allowed is a world in which we have no real freedom. We might protest, though: Is that freedom really important? Here are some consequences of a world without evil:

Perhaps you aren’t convinced. In class I used a book and a film to drive the Problem of Good home.

First, I used The Giver by Lois Lowry. It is a brilliant book that immediately captures the problem of a world where evil is disallowed:

“It was almost December, and Jonas was beginning to be frightened.” Thus opens this haunting novel in which a boy inhabits a seemingly ideal world: a world without conflict, poverty, unemployment, divorce, injustice, or inequality. It is a time in which family values are paramount, teenage rebellion is unheard of, and even good manners are a way of life. But Jonas has been chosen for something special. When his selection leads him to an unnamed man -the man called only the Giver -he begins to sense the dark secrets that underlie the fragile perfection of his world” (Digital Book Jacket).

Despite all its flaws, the recent film starring Jeff Bridges, Meryl Streep, and Brenton Thwaites does capture the world of Sameness in The Giver. I think the trailer captures some of the uniformity that is meant to protect people from evil:

The Giver in book form is more complex it how it understands the evil behind the good veneer of the totalitarian state–the pretended utopia. The movie, however, does capture how a world without pain means we will live in a world without love.

This little clip can’t quite do it justice, but in the film we discover that the two concepts are entwined. In order to eradicate prejudice and hatred, we eradicate differences, thus losing individuality. And in order to get rid of pain, we must lose the risk that allows us to love. Lowry’s invention of a young adult dystopia invites us to ask “what if?” questions and play out some of the answers. In doing so, we discover that love, courage, and truth are dangerous things.

The second approach I took in introducing the Problem of Good was to watch the film, The Invention of Lying. This brilliant Ricky Gervais-Jennifer Garner film has an unusual premise:

It sounds like an idea that religious people–people who claim to believe in Truth–could sign up for: a world where we simply aren’t capable of lying. But as the film explores, beyond social embarrassment, a world without lies lacks great things. What do we gain in 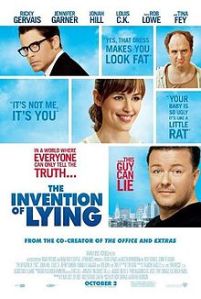 a world with lies? The opportunity to not tell the truth means:

What do we lose in a world with the potential of telling a lie? Is the loss worth it?

We can never know. These fictions allow to explore utopias. I had always thought that “utopia” came from the Greek eu + topos, i.e., “good + place” It actually came from ou + topos, i.e., “no + place.” Though I think we can read ambivalently, “utopia” is a nowhere place because a place of human existence without pain or loss or evil is impossible. It always slips into totalitarianism or inhumanity (and the latter is usually the result of the former).

“A Pilgrim in Narnia” is a blog project in reading and talking about the work of C.S. Lewis, J.R.R. Tolkien, and the worlds they touched. As a "Faith, Fantasy, and Fiction" blog, we cover topics like children’s literature, apologetics and philosophy, myths and mythology, fantasy, theology, cultural critique, art and writing. This blog includes my thoughts as I read through Lewis and Tolkien and reflect on my own life and culture. In this sense, I am a Pilgrim in Narnia--or Middle Earth, or Fairyland. I am often peeking inside of wardrobes, looking for magic bricks in urban alleys, or rooting through yard sale boxes for old rings. If something here captures your imagination, leave a comment, “like” a post, share with your friends, or sign up to receive Narnian Pilgrim posts in your email box. Brenton Dickieson is a father, husband, friend, university lecturer, and freelance writer from Prince Edward Island, Canada. You can follow him on Twitter, @BrentonDana.
View all posts by Brenton Dickieson →
This entry was posted in Thoughtful Essays and tagged apologetics, C.S. Lewis, Jennifer Garner, Lois Lowry, philosophy, Ricky Gervais, The Giver, The Invention of Lying, the Omnitrilemma, The Problem of Pain, theology, utopia. Bookmark the permalink.

13 Responses to The Problem of Good: Thinking about God and Evil with “The Giver”