Posted on October 3, 2017 by Brenton Dickieson 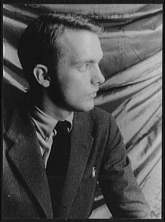 One of the series of books that I read every couple of years is Frederick Buechner’s set of four memoirs written over 20 years or so. It helps that I use three of these books in my teaching at Regent College, but I would, in any case, turn to these books as part of the rhythms of my life.

Though I have never read his most popular novel, the 1950 bestseller A Long Day’s Dying, I am slowly collecting Buechner’s work in the bookshelf of my mind. Particularly rich are his medieval saints lives Brendan and the Pulitzer Prize finalist Godric. My absolute favourite is the National Book Award finalist The Book of Bebb–a series of short novels about a delightfully authentic religious cad named Leo Bebb. And I have used his sermons and devotionals in my teaching with books like The Alphabet of Grace, Whistling in the Dark, and The Clown in the Belfry. I consider Frederick Buechner to be one of the great American writers of the late 20th century–and he is still active in his early nineties. 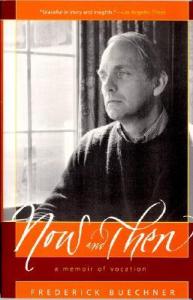 The book that has been ultimately transformative for me has been his Now and Then: A Memoir on Vocation (which I talk about here). It was in the first memoir, The Sacred Journey: A Memoir of Early Days, where I saw an author begin to teach me about life writing as a spiritual and academic discipline. Life writing is an emerging academic discipline we call “autoethnography,” the approach to research that treats the life of the researcher as part of the data of research. In the study of literature, my life is one of the “texts,” and when I am studying C.S. Lewis’ The Great Divorce, I am reading my own story next to that one. In reading these memoirs for the first time in a cabin in rural Japan in 2002, I began to see dimly the discipline that would emerge.

But Buechner–pronounced Beek-ner–also models the spiritual posture of life writing in the way he shapes these memoirs. Life writing is hardly anything new to Christian spirituality. “O wretched man that I am!” cries St. Paul. “Search my heart, O God,” sings the Psalmist. “Take up and read!” chants the echo of eternity in St. Augustine’s confessions. I have read the autobiographies of Thérèse de Lisieux, C.S. Lewis, Sheldon Vanauken, Teresa of Ávila, and Karen Armstrong all in the last year or two. Spiritual autobiography has become one of the hallmarks of great American Christian writing, including new and classic works by Thomas Merton, Kathleen Norris, Madeleine L’Engle, Rachel Held Evans, Anne Lamott, Marilynne Robinson, Annie Dillard, and Dorothy Day. 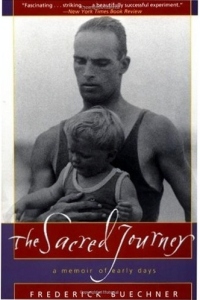 Frederick Buechner is one of the great living memoirists in this tradition. In his introduction to The Sacred Journey, he very briefly sets up his task as life writer:

What I propose to do now is to try listening to my life as a whole, or at least to certain key moments of the first half of my life thus far, for whatever of meaning, of holiness, of God, there may be in it to hear. My assumption is that the story of any one of us is in some measure the story of us all.

For the reader, I suppose, it is like looking through someone else’s photograph album. What holds you, if nothing else, is the possibility that somewhere among all those shots of people you never knew and places you never saw, you may come across something or someone you recognize. In fact—for more curious things have happened—even in a stranger’s album, there is always the possibility that as the pages flip by, on one of them you may even catch a glimpse of yourself. Even if both of those fail, there is still a third possibility which is perhaps the happiest of them all, and that is that once I have put away my album for good, you may in the privacy of the heart take out the album of your own life and search it for the people and places you have loved and learned from yourself, and for those moments in the past—many of them half forgotten—through which you glimpsed, however dimly and fleetingly, the sacredness of your own journey (The Sacred Journey, 6-7).

This is the project that Buechner begins here and carries out over a series of books for the next two decades. The Sacred Journey is an unusual conversion story–a story unlike the testimonial you might be familiar with, though one that has a traditional plotline. A key discovery for me as I flipped through Buechner’s photo album is that, like him, I lost my father when I was young. That loss shaped who I am and what we both later recognized as our unnamed searches for God. 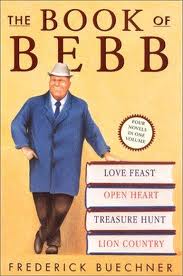 The Sacred Journey has the very soft frame narrative of a construction project happening in his New England home. The pounding of hammers and the shuffling of workboots slips away as Buechner moves through his childhood and early adult life. As he comes to the turning of his time, to the point where something like grace happened unexpectedly in his life, we return to the construction project and the thinking about life writing. This section begins his third chapter, and I think is a nice coda to the theme of listening to our own lives begun in the introduction.

The crow of a rooster. Two carpenters talking at their work in another room. The tick-tock of a clock on the wall. The rumble of your own stomach. Each sound can be thought of as meaning something, if it is meaning you want. After some years now of living with roosters, I know that their crow does not mean that the sun is coming up because they crow off and on all day long with their silly, fierce heads thrown back and the barnyard breezes in their tail feathers. Maybe it means that they are remembering the last time it came up or thinking ahead to the next time. Maybe it means only that they are roosters being roosters. The voices and hammering in the other room mean that not everybody in the world sits around mooning over the past, but that the real business of life goes on and somewhere the job is getting done; means, too, that life is a mystery. What are they talking about? What are they making? The ticking of the clock is death’s patter song and means that time passes and passes and passes, whatever time is. The rumbling stomach means hunger and lunch. But meaning in that sense is not the point, or at least not my point. My point is that all those sounds together, or others like them, are the sound of our lives.

What each of them might be thought to mean separately is less important than what they all mean together. At the very least, they mean this: mean listen. Listen. Your life is happening. You are happening. You, the rooster, the clock, the workmen, your stomach, are all happening together. A journey, years long, has brought each of you through thick and thin to this moment in time as mine has also brought me. Think back on that journey. Listen back to the sounds and sweet airs of your journey that give delight and hurt not and to those that give no delight at all and hurt like Hell. Be not affeard. The music of your life is subtle and elusive and like no other–not a song with words but a song without words, a singing, clattering music to gladden the heart or turn the heart to stone, to haunt you perhaps with echoes of a vaster, farther music of which it is part.

“A Pilgrim in Narnia” is a blog project in reading and talking about the work of C.S. Lewis, J.R.R. Tolkien, and the worlds they touched. As a "Faith, Fantasy, and Fiction" blog, we cover topics like children’s literature, apologetics and philosophy, myths and mythology, fantasy, theology, cultural critique, art and writing. This blog includes my thoughts as I read through Lewis and Tolkien and reflect on my own life and culture. In this sense, I am a Pilgrim in Narnia--or Middle Earth, or Fairyland. I am often peeking inside of wardrobes, looking for magic bricks in urban alleys, or rooting through yard sale boxes for old rings. If something here captures your imagination, leave a comment, “like” a post, share with your friends, or sign up to receive Narnian Pilgrim posts in your email box. Brenton Dickieson is a father, husband, friend, university lecturer, and freelance writer from Prince Edward Island, Canada. You can follow him on Twitter, @BrentonDana.
View all posts by Brenton Dickieson →
This entry was posted in Reflections and tagged Anne Lamott, Annie Dillard, autoethnography, Bebb, Frederick Buechner, Life Writing, Madeleine L'Engle, Marilynne Robinson, Memoir, Rachel Held Evans, research, spirituality, The Sacred Journey. Bookmark the permalink.