Posted on January 24, 2018 by Brenton Dickieson

Having sent out the call for papers, it is delightful to be more a ‘receiving’ than a ‘commissioning editor’, discovering what serendipities Providence supplies. We began last week with Suzanne Bray’s illuminating study of ‘Post-Inklings’ Arthurian fiction of as recently as twenty years ago – in the context of an argument around a century older, and the contributions to it of the first Inkling Arthurian novelist, Charles Williams. Now, Stephen Winter complements this by taking us back to the last Arthurian novel by an Inkling, C.S. Lewis’s The Hideous Strength, to show how one of its most striking features addresses our contemporary situation even more forcefully than it did Lewis’s own, when he wrote it seventy-four years ago. Join us, to contemplate “our haunting”. 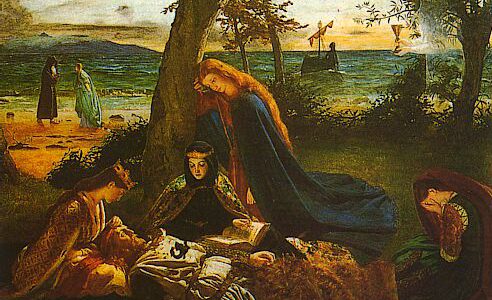 It may feel, for the inhabitants of the British Isles, that recent years have been particularly unsettled. The referendum on Scottish independence in 2014 and the referendum on membership of the European Union in 2016 have both exposed divisions and considerable anxiety within the country that will occupy attention for some time to come. What seemed to be certain and predictable seems less so now. The country in which I was born and raised still calls itself The United Kingdom of Great Britain and Northern Ireland but the possibility of this country being divided into separate nation states and the ongoing history of the status of the province of Northern Ireland and its relationship to the Republic of Ireland and to Great Britain seems closer to a renewed outbreak of violence than at any time since the bloody troubles came to an end with the signing of the Good Friday Agreement in 1998. For good or ill the 2016 referendum on membership of the European Union forces us to rethink the nature of our relationship to the rest of Europe. I would venture to say that none of us know what this will eventually look like.

Recently I felt moved to re-read the last part of the Ransom trilogy by C.S Lewis, That Hideous Strength in which the Arthurian myth is drawn into the history of Britain. My initial reason for doing so was a sense in which the use of language in the public realm is currently being deliberately debased in a manner that reminded me strongly of the National Institute for Coordinated Experiments (N.I.C.E.) in Lewis’s story. The very name of that organisation is a euphemism for its real purpose and the acronym, the N.I.C.E, is one deliberately designed to obscure. Every public statement it makes is a dissembling as is most of its internal communication, and its director, Wither, is a character whose intent is always sinister but whose speech always seeks to hide this reality. The magnificent scene in which the powers of heaven confuse the speech of the N.I.C.E and thus bring about its destruction is one that I felt could be prophetic for our own time. After all, we see many examples about us of the same kind of hubris that pulls “down deep heaven” upon their heads. But as I read Lewis’s story it led me to think about the current state of Britain, a part of which I outlined above.

“The Matter of Britain” was first conceived by medieval poets in relation to the Arthurian myth and was contrasted with “The Matter of Rome” and the mythology of its classical civilisation, and “The Matter of France” which was concerned with Charlemagne, the first Holy Roman Emperor and his great knights. The three tales, when taken together, were a kind of mythological foundation of Christendom, of Europe. The writer, Alan Garner (The Weirdstone of Brisingamen, The Moon of Gomrath etc.) helpfully argues that mythology is not an escape from reality so much as an ‘’intensification” of it. That Hideous Strength is such an intensification, and in the book Lewis develops “The Matter of Britain” in such a way that it addresses our contemporary situation.

It is indeed prophetic. Lewis develops the “The Matter of Britain” through the idea of “the haunting”. In the book’s final chapter this is done most explicitly through the character of Dimble.

“There was a moment in the Sixth Century when something that is always trying to break through into this country nearly succeeded. Logres was our name for it- it will do as well as another. And then… gradually we began to see all English history in a new way. We discovered the haunting.”

Dimble goes on to develop this idea in terms of opposites in tension; of Arthur and Mordred, of Milton and Cromwell, of Philip Sidney and of Cecil Rhodes. The former being expressions of Logres, the latter of Britain. Britain is usually in the ascendency but Logres is always present and recognised as a kind of truest and best self of the people, always under pressure, but always re-emerging in some new and vibrant way. Dimble gets rather carried away and begins to wax lyrical about some kind of English exceptionalism when Ransom sternly brings this to a halt.

“Every people has its own haunter. There is no special privilege for England- no nonsense about a chosen nation. We speak about Logres because it is our haunting, the one we know about.”

The one we know about. Here Lewis gives each people a charge. We are to read, to inhabit, the mythology of our people, the “Matter” of our people in such a way that we come to know it. Dimble gives some examples, the goddess Reason in France, the order of Heaven in China. Amongst the Inklings it was Tolkien who undertook this work in the most systematic fashion. His legendarium is consciously a mythology for the English peoples and is closely related to the Arthurian myth albeit deliberately pre-Christian. The scholar, poet and priest,   describes Christ as “our true Strider”, even as Aragorn is also a type of Arthur, the true “once and future king”.

My re-reading of That Hideous Strength has inspired me to re-engage with this work because I wish to side, as intelligently as I can, with Logres in my own country. What the haunting is in the countries in which other readers of this short essay live I leave to them. Dimble encourages us to do it well because if we discover the haunting of our own people and make our own assent to it, “why, then it will be spring.”

And such an encouragement calls us not to give up. 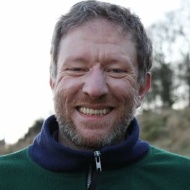 Stephen Winter was ordained as a minister in The Church of England in Birmingham, England in 1988 and from then until 2011 served in a number of capacities within that church. Since then he has been working freelance, although still supporting parishes, and amongst his work he writes a weekly blog exploring wisdom in The Lord of the Rings by J.R.R Tolkien which can be found at stephencwinter.com. He now lives in Worcestershire, England with his wife, Laura and, from time to time, his two daughters, who come and go when not engaged in their studies or other work elsewhere.

“A Pilgrim in Narnia” is a blog project in reading and talking about the work of C.S. Lewis, J.R.R. Tolkien, and the worlds they touched. As a "Faith, Fantasy, and Fiction" blog, we cover topics like children’s literature, apologetics and philosophy, myths and mythology, fantasy, theology, cultural critique, art and writing. This blog includes my thoughts as I read through Lewis and Tolkien and reflect on my own life and culture. In this sense, I am a Pilgrim in Narnia--or Middle Earth, or Fairyland. I am often peeking inside of wardrobes, looking for magic bricks in urban alleys, or rooting through yard sale boxes for old rings. If something here captures your imagination, leave a comment, “like” a post, share with your friends, or sign up to receive Narnian Pilgrim posts in your email box. Brenton Dickieson is a father, husband, friend, university lecturer, and freelance writer from Prince Edward Island, Canada. You can follow him on Twitter, @BrentonDana.
View all posts by Brenton Dickieson →
This entry was posted in Guest Blogs, Inklings and Arthur and tagged Arthuriana, Brexit, C.S. Lewis, Charles Williams, Good Friday Agreement, Great Britain, Inklings, Inklings and Arthur, Inklings and King Arthur, Ireland, Logres, Lord of the Rings, Malcolm Guite, mythology, That Hideous Strength, UK Politics. Bookmark the permalink.