“‘The Name is Against Them’: C.S. Lewis and the Problem of Arthur” by Gabriel Schenk

Posted on January 31, 2018 by Brenton Dickieson

What a delight and relief it is to give something entrusted to your responsibility, out of your hands, step back – and see it prosper. In this case, the Oxford C.S. Lewis Society, which has gone from strength to strength since the last of my three years as its President, some quarter-century ago. An example of which vitality is Dr. Gabriel Schenk’s post today, which began life as a paper read to the ‘Lewis Soc’, and which deepens our attention to That Hideous Strength last week with a wide, rich context in the thought of Lewis – and Dorothy L. Sayers – about King Arthur.

At sixteen, C.S. Lewis declared Malory’s Morte Darthur “the greatest thing I’ve ever read.” He was surprised by how much he’d liked it:

“I had no idea that the Arthurian legends were so fine (The name is against them isn’t it??)”

Although Lewis was probably joking about the name – the comments were made to his close friend Arthur Greeves – there may be some truth behind that last remark; for Lewis, something was often working against the legend. “All through Tennyson’s Idylls the Arthurian story is pulling against nearly everything that Tennyson wants to say,” he wrote in his commentary on Charles Williams‘ poetry (1948), suggesting that Tennyson’s moralistic agenda discorded with other parts of the established story.  Similarly, Lewis was “infuriated” by the King Arthur Hotel in Tintagel, Cornwall, with its “interior walls […]  made of cement with lines on them to represent stone” and its “antique chairs – on which very naturally we find the monogram K.A. stamped,” crass commercialism pushing against the Arthurian subject.

And “the name” that was against the legend was not just Arthur Greeves’s, but King Arthur’s.

In his introduction to G.L. Brook’s Selections from Laȝamon’s Brut (1963), Lewis writes of “the tasteless fiction of Arthur’s foreign conquests,” a detail he supposes is a “vulgar invention” of Geoffrey of Monmouth. Lewis had previously used the words “fine” and “vulgar” in relation to the Arthurian legend in his essay “The English Prose Morte” (1959), when talking about the actions of Malory’s heroes: they promote “the civilisation of the heart […] a fineness and sensitivity, a voluntary rejection of all the uglier and more vulgar impulses.” Lewis gives examples of Gawaine, Launcelot, and Pelleas acting charitably and courteously. He does not use the example of Arthur.

Arthur is also notable for his absence in Lewis’s poem “Launcelot” (written early 1930s, published posthumously as a fragment in 1969). The poem begins in Arthur’s hall, but the first speech is given by Lucan, one of Arthur’s stewards, and Arthur himself only says one short utterance, being “daily less / Of speech,” out of worry for his knights who have gone on the Grail quest. The rest of the poem follows this quest from Launcelot’s perspective.

In his essays, too, Lewis is more interested in Launcelot than Arthur. He is particularly taken by the scene in Malory XIX.12 (Caxton) when Launcelot “wepte as he had ben a child that had ben beten” after healing Sir Urre, quoting it in two separate essays (“The Necessity of Chivalry,” 1940 and “The English Prose Morte,” 1959). The reason why Launcelot weeps is not given, but it may be that he cries in relief and gratitude that he could still perform a healing miracle despite his adultery. Lewis writes that “Hector, Pallas, Othello, or Tom Jones” would not have understood why Launcelot would behave like that. Perhaps he could have added Arthur to that list.

Lewis found a way to write about Arthur without going against the legend – as he thought Tennyson and the King Arthur Hotel did – or portraying him as a war hero or mere figurehead: he ignores Arthur the character, and focuses on Arthur as a representative in That Hideous Strength (1945).

In that novel, King Arthur has long since left Earth, to live on another planet “with Enoch and Elias and Moses and Melchisedec the King” – a Judeo-Christian Sci-Fi version of the afterlife Wace gives Arthur with the elves, which Lewis once wrote a poem about (1919, now lost). But Lewis is not interested in this version of Arthur, besides a passing reference in Strength, in which he speculates about the historicity of the legend. Instead he focuses on Arthur’s other name, Pendragon, using it as a title that has been passed down through generations. Elwin Ransom, the hero of the previous two books in the trilogy, becomes the 79th successor of the Pendragon title, making King Arthur one link in a long chain. 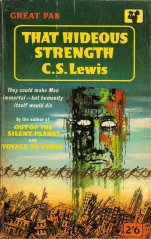 Arthur is not merely one of the holders of the Pendragon title, however. When Jane Studock meets Ransom for the first time:

“She had (or so she had believed) disliked bearded faces except for old men with white hair. But that was because she had long since forgotten the imagined Arthur of her childhood – and the imagined Solomon too. Solomon – for the first time in many years the bright solar blend of king and lover and magician which hangs about that name stole back upon her mind. For the first time in all those years she tasted the word king itself with all linked associations of battle, marriage, priesthood, mercy and power.”

Lewis may not have liked Arthur’s character – bloodthirsty at worst, boring at best – but he appreciates the idea of kingship promoted by the figure, albeit filtered, in this case, through childhood memory. But even here, Lewis refuses to linger on Arthur, pushing him aside with the example of Solomon. It’s as if the name of Arthur works against the idea of kingship Lewis is describing, even when Arthur is also an example of that idea.

Solomon or Arthur? ‘The Judgment of Solomon’ (La Sainte Bible, 1866) and ‘King Arthur Discovering the Skeletons of the Brothers’ (Idylls of the King, 1875) by Gustave Doré

The Pendragon title gets pushed aside too; Ransom is also known as “Mr. Fisherking”. The Fisher King is another Arthurian character, who is permanently wounded, as Ransom is, and reigns over the Wasteland in the Grail story (although the Fisher King is usually wounded in the legs or groin, whereas Ransom is wounded in the heel, following God’s command in Genesis 3:15  that the serpent shall strike Eve’s offspring on the heel). So Ransom is Arthur, and the Fisher King, and just a man, bitten on the heel like any other son of Eve. Arthur is only one image in a line of images Lewis uses to express his meaning. 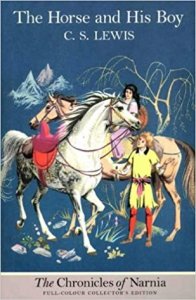 The Narnia books are full of Arthurian references. Fiona Tulhurst argues that Prince Caspian is Arthurian because the relationship between Caspian and Repicheep embodies Arthurian chivalry; Cor from The Horse and his Boy resembles Tor from the Arthurian legend, who is also raised as a poor boy, unaware of his royal heritage; and the Dolorous word in The Magician’s Nephew resembles ‘The Dolorous Stroke’ of the Arthurian Wasteland. The Voyage of the Dawn Treader has been singled out as particularly Arthurian – Margaret Blount argues that The Voyage of the Dawn Treader has ‘a strong Arthurian odour’ (she must have a good sense of smell) because it is a version of the Grail Quest. The Pevensies’ return to Narnia is even directly compared to Arthur’s future return to Britain.

But the Narnian characters are not only Arthurian figures, just as Ransom is not only reminiscent of Arthur. When Tennyson was asked whether the three queens at the end of his Arthurian work Idylls of the King represented “faith, hope, and charity” he said:

They are right, and they are not right. They mean that and they do not. They are three of the noblest of women. They are also those three Graces, but they are much more. I hate to be tied down to say, ‘This means that’ because the thought within the image is much more than any one interpretation.

Lewis thought through images, and the thoughts within his images are more than any one interpretation. Ransom is Arthur, and he is not; the Pevensies are Arthur, and they are not; the name of Arthur works against the legend, and it does not.

This blog post began as a talk given at the C.S. Lewis Society, Oxford, 1st March 2016.

Gabriel Schenk completed his DPhil in Arthurian literature at Pembroke College, Oxford, in 2014. He is the web editor for owenbarfield.org and the co-founder of the annual Tolkien lecture on Fantasy Literature (tolkienlecture.org).

“A Pilgrim in Narnia” is a blog project in reading and talking about the work of C.S. Lewis, J.R.R. Tolkien, and the worlds they touched. As a "Faith, Fantasy, and Fiction" blog, we cover topics like children’s literature, apologetics and philosophy, myths and mythology, fantasy, theology, cultural critique, art and writing. This blog includes my thoughts as I read through Lewis and Tolkien and reflect on my own life and culture. In this sense, I am a Pilgrim in Narnia--or Middle Earth, or Fairyland. I am often peeking inside of wardrobes, looking for magic bricks in urban alleys, or rooting through yard sale boxes for old rings. If something here captures your imagination, leave a comment, “like” a post, share with your friends, or sign up to receive Narnian Pilgrim posts in your email box. Brenton Dickieson is a father, husband, friend, university lecturer, and freelance writer from Prince Edward Island, Canada. You can follow him on Twitter, @BrentonDana.
View all posts by Brenton Dickieson →
This entry was posted in Guest Blogs, Inklings and Arthur and tagged Arthuriana, Brexit, C.S. Lewis, Charles Williams, Dorothy L. Sayers, Inklings, Inklings and Arthur, Inklings and King Arthur, Logres, Lord of the Rings, Malory, Morte Darthur, mythology, Narnia, Tennyson, That Hideous Strength. Bookmark the permalink.

35 Responses to “‘The Name is Against Them’: C.S. Lewis and the Problem of Arthur” by Gabriel Schenk