If Owen Barfield has been called the First and Last Inkling, Charles Williams has been very aptly called the Third Inkling – and the Oddest Inkling. He was also the oldest Inkling, both publishing his first book, a sonnet sequence, The Silver Stair, and writing The Chapel of the Thorn: A Dramatic Poem in 1912 when Tolkien, Dyson, Barfield, and the Lewis brothers were still students. And he was the most prolifically Arthurian Inkling. Today, it is our great privilege and delight to have his biographer and fellow-poet, Grevel Lindop, give us so lucid and lively an introduction to Charles Williams’s little-known first fruits as an Arthurian.

It’s fair to say that none of the Inklings was more preoccupied with the Arthurian legends than Charles Williams. His 1930 novel War in Heaven concerns the rediscovery of the Grail (or ‘Graal’, as Williams preferred to spell it) in twentieth-century England; and his two volumes of Arthurian poems, Taliessin Through Logres (1938) and The Region of the Summer Stars (1944) are, as David Llewellyn Dodds has put it, ‘the major imaginative work about the Grail of the twentieth century’; and they are not only about the Grail, but form a highly original treatment of the Arthurian ‘myth’ (Williams’s preferred term) as a whole.

I only fully realised how much Arthurian Britain had been a lifelong preoccupation for Charles Williams when I went to Oxford’s Bodleian Library to undertake research for my 2015 biography, Charles Williams: The Third Inkling. Along with vast amounts of correspondence and drafts of poems, the Bodleian collection contained the extraordinary ‘MS. Eng. e. 2012’ – the Library’s pressmark for a thick green hardback volume labelled The Holy Grail.

In fact this is Charles Williams’s Arthurian Commonplace Book: a volume of blank pages into which he poured his ideas, thoughts, literary gatherings and newspaper cuttings on everything to do with the Arthurian legends, from around 1911 until perhaps 1916.

The first page bears a kind of motto, a line from Tennyson’s ‘Morte D’Arthur’: ‘His epic, his King Arthur, some twelve books.’ Not until much later did Williams decide to write his Arthurian work as lyrical episodes rather than a continuous narrative. 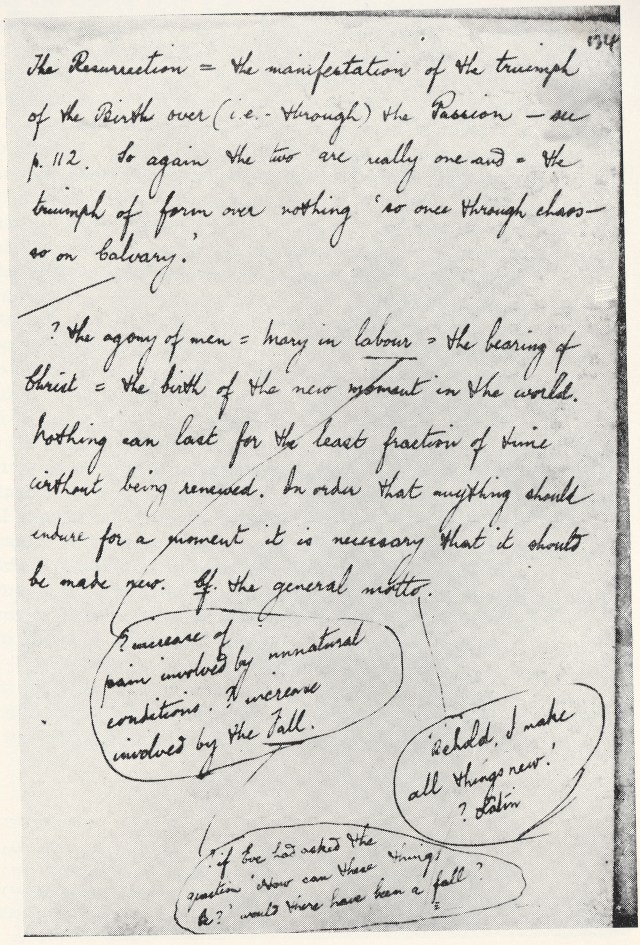 Fascinatingly, the notes show Williams trying to forge the Arthurian material, profoundly reinterpreted, into a universal epic: a drama of the human spirit worthy to stand beside the works of Virgil, Dante, and Milton. The notes show him thinking, reading, and making connections with fertile and questioning intensity.

And he ransacks the most varied books for possible material. Of course he studies versions of the Arthurian legends, including Malory’s Morte D’Arthur and the Mabinogion.  He looks up the article on ‘Taliessin’ in the Dictionary of National Biography. Jessie Weston’s scholarly Arthurian studies figure, alongside books on Celtic Literature and on Arthur’s likely historical period at the end of the Roman occupation of Britain – including Ancient Earthworks, a book by Charles Williams’s uncle, the antiquarian J. Charles Wall. 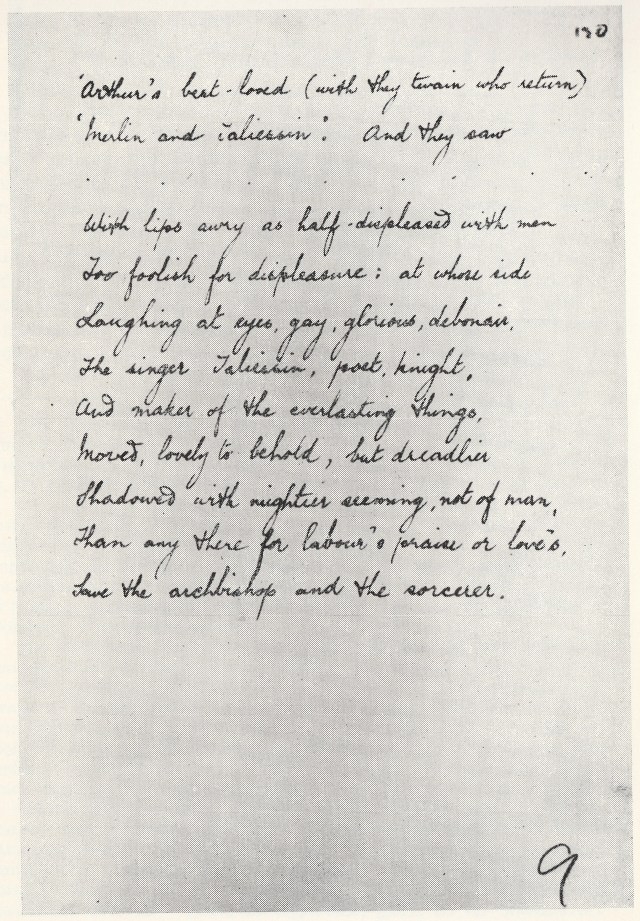 But most of the titles Williams quotes aren’t obviously connected with Arthur at all. He hunts for books which will help him deepen his theme and show the Arthurian stories as a universal myth. He studies Frazer’s Golden Bough for cults of dying and sacrificed gods who might relate to the wounded Fisher King of the Grail legends. He reads Wallis Budge on ancient Egypt and Prescott’s Conquest of Mexico to find out if Osiris and Quetzalcoatl might contribute. He reads about the Greek oracles and the Gnostics. Wanting to broaden the poem’s sense of Arthur’s context in time and place he studies the Geographical Journal, which attributes the fall of the Roman Empire to

‘the dwindling rainfall of Central Asia, which … drove the drought-stricken barbarians to Europe’.

And to develop his ideas about imaginative spiritual power, good and bad, he searches for ideas on magic, mysticism and the borders between. Arthur Machen’s The Great God Pan is noted alongside the idea that Pan might be Merlin’s father; E. Nesbit’s Story of the Amulet is quoted: ‘Knowledge that Time & Space are only modes of thought – “is not this the beginning of all magic?”’ He studies C.W. Upham on the Salem witches, as well as A.E. Waite’s Mysteries of Magic (a compilation from the French occultist Eliphas Lévi) and Waite’s own Hidden Church of the Holy Graal.

Love is to be the central theme, and Arthur’s knights, Williams speculates, might embody different types of love – Tristram could be ‘fated love’, Lancelot ‘sinful love’, Perceval ‘human love’ and Galahad ‘Divine love’. Or Perceval might represent ‘virginal love: he rarely sees his mistress, but their souls dwell holily together’? Love, anyway, is vitally important: ‘Love, as God, and as the Way, [are] to dominate the poem’.

There are glimpses of political ideas: the Round Table might somehow represent both ‘the visible Church [and] the visible Republic’; the Holy Grail could ‘appear to a native-born churl, the slave of a Roman lord’. The knights might be ‘champions, orators, and almost embodiments’ of guilds of craftsmen in Camelot: this would be a way to ‘include the idea of the common people’.

Time and history will be there too. An ‘evolutionary vision of the world, of its aeons and aeons of life and development, wherein the Roman Empire is only a breathing space & Egypt a moment’s advance or retrogression’ might be put into a speech by a Roman – or a Stoic, a Platonist, or maybe an Epicurean. And Arthur, rather than being some sort of Christ figure, should be imperfect, loving his Queen Guinevere through ‘pride, rather than real love’ because he is ‘in love with his love (= himself)’. 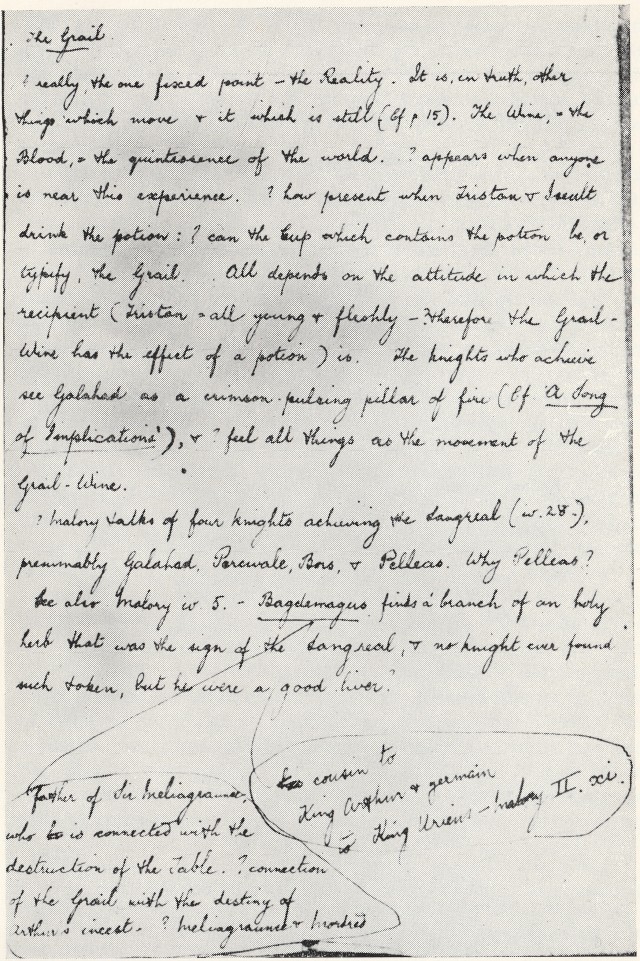 His kingdom, to be called Logres (a Welsh-derived name used in the early sources), might represent ‘the achievements of men (medicine, aeroplanes, logical thought, intensive agriculture, &c) in the midst of the darkness and evil chances which surround them’. Would there be ‘any real objection to time & distance being ignored, & Mohammedan knights introduced’? Crucially, he speculated that one could

And indeed he carried out this plan in his mature Arthurian poems.

Key characters – not all of whom made it into the finished poems – are sketched out: ‘The three great men of Arthur’s household: Dubric, the ecclesiastic & priest[;] Merlin, the wizard & ‘scientist’[;] Taliessin, the artist, poet, singer.’ And the Grail must be the essential focus of the poem. As Williams writes: ‘The Grail? really, the one fixed point – the Reality. It is, in truth, other things which move & it which is still…The Wine, = the Blood, = the quintessence of the world.’

It was a marvellous conception. But around 1916, Williams realised that the plan was far beyond his capabilities, and that in any case another long blank-verse poem about Arthur would merely seem to duplicate Tennyson. But he had already contributed a song on Arthurian themes to the Pageant of Gwent in 1913, and he continued to write occasional short poems referencing the mythos; John Matthews and I will be presenting all those which he published, together with his major volumes, in our edition of The Arthurian Poems of Charles Williams, due to appear in the next few weeks. And when he triumphantly completed the major Arthurian poems of Taliessin Through Logres and The Region of the Summer Stars, in the 1930s and ‘40s, it was to treat the myth through intense lyrical episodes, not as a linear narrative.

He never returned to his Commonplace Book, but instead gave it to his friend and fellow-poet, Anne Ridler (who in later years presented it to the Bodleian). But it had served its purpose, as the treasure-hoard from which the poems of Taliessin Through Logres and The Region of the Summer Stars were finally forged.

Grevel Lindop is the author of Charles Williams: The Third Inkling (Oxford University Press, 2015), which won the Mythopoeic Scholarship Award for Inklings Studies, and, with John Matthews, editor of The Arthurian Poems of Charles Williams (forthcoming from Mythwood Books).

The Commonplace Book was introduced in Charles Williams, The Image of the City (and Other Essays), selected and introduced by Anne Ridler (1958).

“A Pilgrim in Narnia” is a blog project in reading and talking about the work of C.S. Lewis, J.R.R. Tolkien, and the worlds they touched. As a "Faith, Fantasy, and Fiction" blog, we cover topics like children’s literature, apologetics and philosophy, myths and mythology, fantasy, theology, cultural critique, art and writing. This blog includes my thoughts as I read through Lewis and Tolkien and reflect on my own life and culture. In this sense, I am a Pilgrim in Narnia--or Middle Earth, or Fairyland. I am often peeking inside of wardrobes, looking for magic bricks in urban alleys, or rooting through yard sale boxes for old rings. If something here captures your imagination, leave a comment, “like” a post, share with your friends, or sign up to receive Narnian Pilgrim posts in your email box. Brenton Dickieson is a father, husband, friend, university lecturer, and freelance writer from Prince Edward Island, Canada. You can follow him on Twitter, @BrentonDana.
View all posts by Brenton Dickieson →
This entry was posted in Guest Blogs, Inklings and Arthur and tagged @GrevelLindop, Arthuriana, Bodleian Library, Charles Williams, Grevel Lindop, Inklings, Inklings and Arthur, Inklings and King Arthur, Logres, Malory, mythology, Taliessin Through Logres, Tennyson, The Region of the Summer Stars, War in Heaven. Bookmark the permalink.