The Inklings and Arthur Series Index 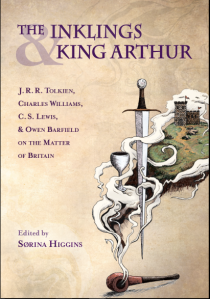 This series that celebrated the release of The Inklings and King Arthur: J. R. R. Tolkien, Charles Williams, C. S. Lewis, and Owen Barfield on the Matter of Britain has been one of the best blog series that I have ever seen. This pleases me, since nothing could compliment Sørina Higgins’ editorial work on the Oxford Inklings and their Arthurian contexts more than great public writing. The series is filled with excellent articles by leading academics, emerging scholars, and independent writers and artists from various countries in Europe and North America.

Part of the success of this series was the continued editing excellence and comment moderation by guest editor, David Llewellyn Dodds. David is no stranger to the world of “Inklings Online,” and as readers will know, is one of the important contributors to the work of Charles Williams and modern Arthuriana in the last generation. It was a thrill to have such a high-profile editor, I am very proud to have hosted the series.

Here is a list of the posts that were in the Inklings and Arthur Series:

Post #1: “The Launch of The Inklings and King Arthur” by blog host and C.S. Lewis scholar Brenton Dickieson

Post #3: “The Argument Continues: Late 20th Century Christian and Pagan Depictions of Arthur and the Grail” by Suzanne Bray, professor of British literature and vivilisation

Post #4: “A Personal Reflection on Logres and The Matter of Britain” by Stephen Winter, Anglican minister and Tolkienist

Post #5: “‘The Name is Against Them’: C.S. Lewis and the Problem of Arthur” by Gabriel Schenk, Arthurian scholar at Signum University

Post #6: “An ‘Easy to Read’ Modern Arthurian Epic” by Dale Nelson, academic and columnist for CSL

Post #10: “Arthurian Literature and the Old Everyman’s Library” by Dale Nelson, academic and columnist for CSL

Post #13: “Thor: Ragnarok and C.S. Lewis’ Mythic Passions” by Josiah Peterson, teacher in “The Rhetoric of C.S. Lewis” at The King’s College in New York

Here are a few other Arthur-related posts on A Pilgrim in Narnia:

13 Responses to The Inklings and Arthur Series Index