Posted on October 1, 2018 by Brenton Dickieson

In a recent Late Night interview, Stephen Colbert called New Zealand Prime Minister Jacinda Ardern “basically a hobbit.” This little quip, connecting New Zealand (once again) to the Peter Jackson films, caused Ardern to admit that she did, in fact, audition for the Hobbit films, but was unsuccessful. Perhaps that was best, given the films, but it gave Colbert a chance to talk about his Tolkienophila. He is, as he says, pretty much obsessed with The Lord of the Rings and Tolkien’s work. 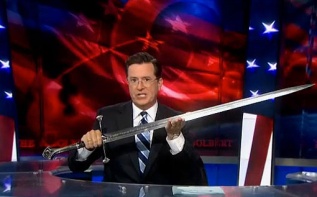 Well, that exchange with the Prime Minister led to a beautiful moment for a Tolkien fan. As a result of Colbert’s admission of neverending fandom, PM Ardern revealed that he has been invited to become a citizen of Hobbiton. This honour does not include a magical sword, or even a golden key. It does, however, include a mug.

Stephen Colbert’s response? “Did you bring the paperwork?”

I wonder if Tom Shippey is next.

“A Pilgrim in Narnia” is a blog project in reading and talking about the work of C.S. Lewis, J.R.R. Tolkien, and the worlds they touched. As a "Faith, Fantasy, and Fiction" blog, we cover topics like children’s literature, apologetics and philosophy, myths and mythology, fantasy, theology, cultural critique, art and writing. This blog includes my thoughts as I read through Lewis and Tolkien and reflect on my own life and culture. In this sense, I am a Pilgrim in Narnia--or Middle Earth, or Fairyland. I am often peeking inside of wardrobes, looking for magic bricks in urban alleys, or rooting through yard sale boxes for old rings. If something here captures your imagination, leave a comment, “like” a post, share with your friends, or sign up to receive Narnian Pilgrim posts in your email box. Brenton Dickieson is a father, husband, friend, university lecturer, and freelance writer from Prince Edward Island, Canada. You can follow him on Twitter, @BrentonDana.
View all posts by Brenton Dickieson →
This entry was posted in Memorable Quotes, News & Links and tagged Hobbiton, J.R.R. Tolkien, Jacinda Ardern, Lord of the, Lord of the Rings, New Zealand, Peter Jackson, Stephen Colbert, The Hobbit. Bookmark the permalink.

20 Responses to Stephen Colbert to become Honorary Citizen of Hobbiton