Terry Lindvall’s Heavy Treatment of a Light Topic: A Review of Surprised by Laughter

Posted on February 25, 2019 by Brenton Dickieson

Surprised by Laughter Revised & Updated: The Comic World of C.S. Lewis by Terry Lindvall
My rating: 4 of 5 stars

The word “levity” has two main definitions that we walk around with: a kind of frivolity and something that lacks weight. In an irony that would make the author of The Light Princess proud (George MacDonald), Terry Lindvall’s book on C.S. Lewis and humour is one of the weightiest on my bookshelf. My edition has 455 pages, not including notes and indices. Surprised by Laughter: The Comic World of C.S. Lewis may be about levity, and it is written in a light, joyous, but not frivolous manner, but it is a book with significant gravity.

Quite frankly, it is one of the most serious books on comedy that I have ever read. Lindvall categorically works through literally (and literarily) hundreds of humour references in Lewis‘ catalogue. Called “Heavy Lewis” in his early years in Oxford, Lewis makes a deft conversation partner with some heft on issues of hilarity. Not only is he a mirthful writer, dashing his poetry, academic writing, Christian apologetics, and fantasy with generous helpings of wit and hilarity, but Lewis composed formal satire, wrote satirically in various places, evaluated humour in his literary criticism, included something like a theory of humour in his work, and shaped his entire spiritual life around the concept of Joy. Lewis is precisely the right figure for a study on levity of this density.

Beyond those reasons though, there are two deeper ones that Lindvall draws out and one that I would like to add. 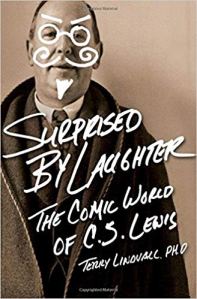 First, Lewis’ literary mentors were George MacDonald and G.K. Chesterton. While both were funny writers, Chesterton was a genius of wit, irony, and repartee. Along with some contemporary theory of humour, Chesterton structures Lindvall’s assessment of Lewis’ comedic vision. Lindvall not only emphasized for me the deeply ironical, satirical, and evaluative nature of Chesterton’s prose, but showed how Lewis takes that voice and transforms it into his own. More attention is needed, I think, to Chesterton’s shaping of Lewis’ mind at the deepest levels.

Second, Lewis said of himself that “There’s no sound I like better than adult male laughter.” Lindvall anchors his substantial study of Lewisian buoyancy in Lewis’ life–his life of light and darkness growing up, the self-deprecating nature of his humour, Lewis’ life in love and friendship, Lewis’ profile as a public figure, and his peculiar theory of Joy. Lindvall models how a study can integrate life and letters in productive ways.

To these two points I would add a third–something that is not drawn out by Lindvall but that I think is there, lurking in the text. All of Lewis’ spiritual perspective, I would argue, is shaped in comedic form. Comedy follows a U shape: the descent of downward luck or fortune or adventure and the sudden turn to goodness or light or hope. Lewis’ conversion is one of these turns, of course, but Lewis’ entire perspective is patterned after the great U-shaped comedy of all history: the Christ event, where God takes the form of humanity, even that of a slave, and dies upon the cross so that the entire wheel of history turns in Christ’s resurrection and return to heaven. That is Lewis’ pattern, and thus we see in almost everything Lewis ever wrote an ironical, comedic, eucatastrophic, U-shaped perspective that is able to hold together light and darkness, levity and gravity, a real look at the world and a wild abandon to hope. 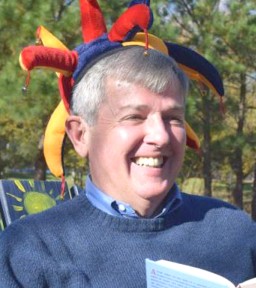 Critically-speaking I loved the prose in this book, but it is a bit much overall. I think the text could be shorter, though we now have a dense tome of “data” and “analysis” as we do our further work. I took two years to read this book because, frankly, I could only read so much at a time. It is a long book, and though the chapter divisions are generally good, I needed more guidance within the chapters as the text can seem to roll from idea to idea without a linking logic. I also don’t really understand the outline of the text as a whole, but that may be my weakness as a reader. Finally, I know little of theories of humour and felt that this aspect was light in the text–though I think Lindvall is right that Lewis’ humour is typically that of incongruity.

Overall, however, this book is an adipose study on lightness that looks ponderously into the grave subject of levity. It carries its own literary avoirdupois because of the buoyant tone and festive delight in the subject matter. Dr. Terry Lindvall’s Surprised by Laughter is worth reading and available in a cheap Kindle edition for fans and researchers.

“A Pilgrim in Narnia” is a blog project in reading and talking about the work of C.S. Lewis, J.R.R. Tolkien, and the worlds they touched. As a "Faith, Fantasy, and Fiction" blog, we cover topics like children’s literature, apologetics and philosophy, myths and mythology, fantasy, theology, cultural critique, art and writing. This blog includes my thoughts as I read through Lewis and Tolkien and reflect on my own life and culture. In this sense, I am a Pilgrim in Narnia--or Middle Earth, or Fairyland. I am often peeking inside of wardrobes, looking for magic bricks in urban alleys, or rooting through yard sale boxes for old rings. If something here captures your imagination, leave a comment, “like” a post, share with your friends, or sign up to receive Narnian Pilgrim posts in your email box. Brenton Dickieson is a father, husband, friend, university lecturer, and freelance writer from Prince Edward Island, Canada. You can follow him on Twitter, @BrentonDana.
View all posts by Brenton Dickieson →
This entry was posted in Reflections and tagged C.S. Lewis, comedy, g k chesterton, George MacDonald, humor, joy, literary criticism, Sehnsucht, Surprised by Laughter, Terry Lindvall, The Light Princess. Bookmark the permalink.

45 Responses to Terry Lindvall’s Heavy Treatment of a Light Topic: A Review of Surprised by Laughter