Last week we had an amazing Thesis Theater event, a great discussion about C.S. Lewis’ WWII-era science fiction trilogy. Recent Signum University MA graduate Adam Mattern was the central figure, presenting his thesis titled “An Image of the Discarded: C. S. Lewis’s Use of the Medieval Model in His Planetary Fiction.” I facilitated the conversation Adam, and we were pleased to have Lewis scholar, Dr. David Downing, join us by audio. David is director of the Wade Center at Wheaton College and has written one of the more important books on the Ransom Cycle, Planets in Peril: A Critical Study of C. S. Lewis’s Ransom Trilogy  (1992). David has also written an Inklings novel, Looking for the King (which I reviewed here), and an annotated version of C.S. Lewis’ The Pilgrim’s Regress–books mentioned in the discussion. The conversation went so well I decided to share it below. 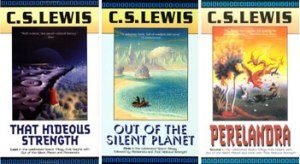 Sometime in late 1936 or early 1937, C.S. Lewis and J.R.R. Tolkien agreed to write science fiction stories, since what was being published at the time included too little of what they enjoyed. Within Lewis’s science fiction series, he incorporated the Medieval Model (as described in his The Discarded Image) to construct the cosmos of his trilogy and populate his extraterrestrial worlds of Malacandra and Perelandra. With an eye on Lewis’s history with the genre and his approach to writing fiction, this paper explores why Lewis patterned his cosmos after the Medieval Model and how he used medieval literature to inspire a feeling of Sehnsucht or Joy, a critical component of his fiction. His personal experiences with Sehnsucht informed Lewis’s approach to creating a sense of Other by drawing on spiritual elements, which he believed to be an analog of the type of alien worlds that science fiction readers longed to visit. It was through the Medieval Model and the experience of other worlds that Lewis’s series critiqued and subverted what he saw as the growing misapplication of specific scientific principles to ethics, which had become popular in other science fiction stories of the time.

Adam Mattern works for Cisco Talos as a team lead for a group that conducts web traffic analysis for a web filtering product. He lives in Bloomington, Indiana, with his wife as she completes her Ph.D. in Medical Anthropology. He started with Signum University with the Tolkien and the Epic class and discovered Medieval Literature through reading about Tolkien and Lewis’s friendship and their fiction. Now finished with his M.A., he plans to get back into woodworking, writing, and attempting to surmount a reading list that has only been bolstered by his time at Signum.

If you would like a copy of the thesis, send me an email at junkola [at] gmail [dot] com.

“A Pilgrim in Narnia” is a blog project in reading and talking about the work of C.S. Lewis, J.R.R. Tolkien, and the worlds they touched. As a "Faith, Fantasy, and Fiction" blog, we cover topics like children’s literature, apologetics and philosophy, myths and mythology, fantasy, theology, cultural critique, art and writing. This blog includes my thoughts as I read through Lewis and Tolkien and reflect on my own life and culture. In this sense, I am a Pilgrim in Narnia--or Middle Earth, or Fairyland. I am often peeking inside of wardrobes, looking for magic bricks in urban alleys, or rooting through yard sale boxes for old rings. If something here captures your imagination, leave a comment, “like” a post, share with your friends, or sign up to receive Narnian Pilgrim posts in your email box. Brenton Dickieson is a father, husband, friend, university lecturer, and freelance writer from Prince Edward Island, Canada. You can follow him on Twitter, @BrentonDana.
View all posts by Brenton Dickieson →
This entry was posted in Feature Friday, Fictional Worlds and tagged Adam Mattern, C.S. Lewis, david downing, joy, Looking for the King, Marion E. Wade Center, Ransom Trilogy, Science Fiction, Sehnsucht, Signum University, The Discarded Image, The Pilgrim's Regress. Bookmark the permalink.